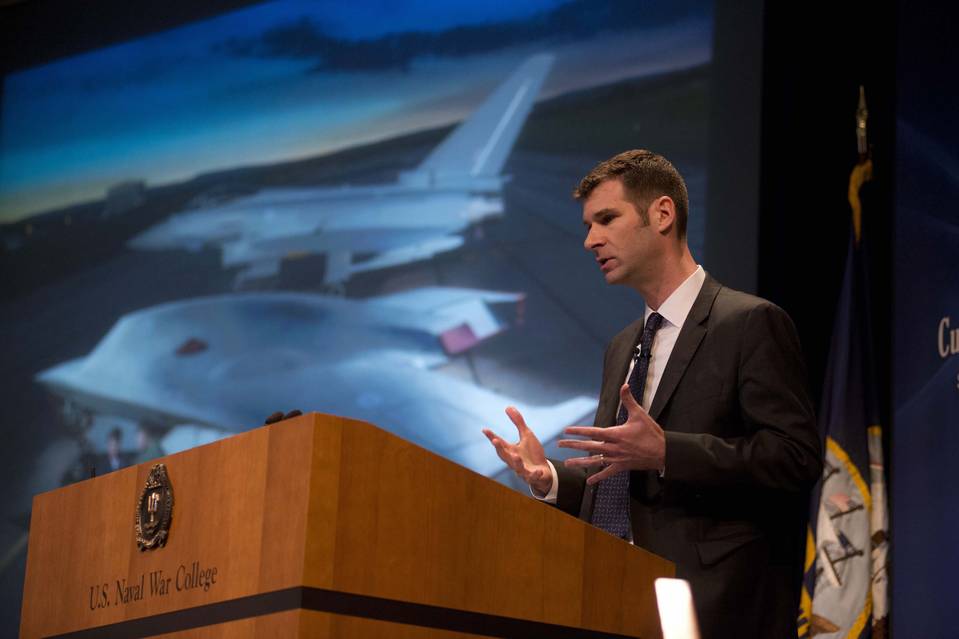 WASHINGTON— Peter Singer, one of Washington’s pre-eminent futurists, is walking the Pentagon halls with an ominous warning for America’s military leaders: World War III with China is coming.

In meeting after meeting with anyone who will listen, this modern-day soothsayer wearing a skinny tie says America’s most advanced fighter jets might be blown from the sky by their Chinese-made microchips and Chinese hackers easily could worm their way into the military’s secretive intelligence service, and the Chinese Army may one day occupy Hawaii.

The ideas might seem outlandish, but Pentagon officials are listening to the 40-year-old senior fellow at the New America Foundation, a nonpartisan think tank.

In hours of briefings, Mr. Singer has outlined his grim vision for intelligence officials, Air Force officers and Navy commanders. What makes his scenarios more remarkable is that they are based on a work of fiction: Mr. Singer’s soon-to-be-released, 400-page techno thriller, “Ghost Fleet: A Novel of the Next World War.”

“World War III may seem like something that was either a fear in the distant past or a risk in the distant future,” Mr. Singer told a dozen Air Force officers during a Pentagon briefing last week. “But, as the Rolling Stones put it in ‘Gimme Shelter,’ ‘It’s just a shot away.’ ”

Pentagon officials typically don’t listen to the doom-and-gloom predictions of fiction writers. But Mr. Singer comes to the table with an unusual track record. He has written authoritative books on America’s reliance on private military contractors, cybersecurity and the Defense Department’s growing dependence on robots, drones and technology.

The Army, Navy and Air Force already have included two of his books on their official reading lists. And he often briefs military leaders on his research.

“Ghost Fleet,” co-written with former Wall Street Journal reporter August Cole is based on interviews, military research and years of experience working with the Defense Department.

“He’s the premier futurist in the national-security environment,” said Mark Jacobson, a special assistant to Navy Secretary Ray Mabus, who made sure his boss read the book. “Peter’s always where the ball is going to be. And people in the Pentagon listen to what he has to say.”

Release of the book by Houghton Mifflin Harcourt HMHC 0.12 % on Tuesday comes during a new period of soul-searching for the U.S. military.

But threats posed by Islamic State militants reluctantly have pushed Mr. Obama and the U.S. military back into a limited war against the irregular insurgents in Iraq and Syria.

The end of the Cold War and the rise of al Qaeda compelled the U.S. military to reorient its priorities to focus on threats posed by small, stateless militants.

Pentagon officials have elevated military officers who embraced the “small war,” counterinsurgency dogma that guided the U.S. through a decade of wars in Iraq and Afghanistan.

Russia’s military operations in Ukraine and China’s aggressive attempts to extend its control in the South China Sea have forced the Pentagon to re-evaluate its world view and think anew about the threats posed by powerful rivals.

“Ghost Fleet,” which includes hundreds of endnotes, challenges conventional military doctrine and relies on real events to warn that the U.S. military is vulnerable to cyberattacks that could cripple its ability to win a war with China.

The time has come, Mr. Singer tells military officials in his briefings, for the Pentagon to consider the possibility that Americans could face real dog fights in the sky and deadly naval battles unlike anything the U.S. has seen since World War II.

“It may not be politic, but it is, in my belief, no longer useful to avoid talking about the great power rivalries of the 21st century and the real dangers of them getting out of control,” he told Air Force officers at the Pentagon. “Indeed, only by acknowledging the real trends and real risks that loom can we take the mutual steps to avoid the kind of mistakes that would set up such an epic fail in both deterrence and diplomacy.”

After the briefing, Col. Randall Reed, director of the Air Force Executive Action Group who hosted Mr. Singer, said it helped spark debate about how to respond to real-world threats. “Having various ways to view any issue is diversity of thought and that’s healthy,” he said.

Paula Thornhill, a retired Air Force brigadier general who brought Mr. Singer to the Pentagon to speak about his work on robotics, said Mr. Singer “did an excellent job of challenging some of the Air Force’s finest emerging scientists and engineers to think about the strategic and operational impact of robotics many of them were studying, and I knew he could do the same for a more operationally focused military audience.”

“This would help them better envision the human dimensions of conflict rather than trying to contemplate what that might look like by working mostly with high-tech weapons and drafting operations plans,” said Ms. Thornhill, who is now a senior political scientist at RAND Corp.

One of America’s biggest vulnerabilities is in cyberspace, where Chinese hackers have secured access to White House computers, defense industry plans and millions of secret U.S. government files.

American officials have long warned that the nation is at risk of a “cyber Pearl Harbor,” and the Obama administration has been quietly developing more proactive steps to reduce the country’s vulnerabilities.

In “Ghost Fleet,” the authors envision a cyberwar where Beijing uses hidden technology baked into Chinese-made chips to help bring down one of America’s costly, controversial next- generation F-35 fighter jets.

In another creative hack, China uses a gardener’s cellphone to get inside the Defense Intelligence Agency computer system. The U.S. has to turn to Silicon Valley to develop a modern day cyber Manhattan Project and rely on help from hackers to try to gain an advantage. Meanwhile, Americans in Hawaii launch an insurgency against the occupying Chinese forces.

The book is fiction, but Mr. Singer wants Pentagon leaders to see it as a cautionary tale.

Mr. Singer pointed out to the Air Force leadership that the opening scene of “Ghost Fleet,” featuring a showdown between a U.S. P-8 plane monitoring Chinese ships, played out in real life last month in an increasingly concerning dispute over islands in the South China Sea.

“War is not just revolutionary, it’s evolutionary,” he said. “It’s survival of the fittest. And the real world is moving in such a way as to make this book potentially a work of prediction, which I’d rather never come true.”

Write to Dion Nissenbaum at dion.nissenbaum@wsj.com