Editorial – ISIS in the Philippines?

EDITORIAL – ISIS in the Philippines? 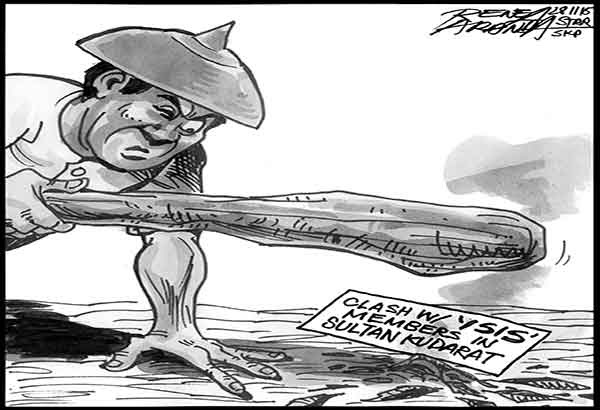 Five black flags similar to those used by the Islamic State of Iraq and Syria were found at the site of an encounter the other day between the military and eight members of a bandit group in Sultan Kudarat. The eight were killed in the encounter, with one of them reported to be one of the men wanted for the deadly nightclub bombings in Bali, Indonesia in 2002.
The Bali bombings were blamed on the Southeast Asian terror cell Jemaah Islamiyah, which in the Philippines has long enjoyed protection from the Moro Islamic Liberation Front. JI members have operated with the Abu Sayyaf and other armed groups so the presence in Sultan Kudarat of a terrorist wanted for the Bali bombing was not surprising.
A source of concern for security officials was the presence of the black flags. Has ISIS gained a foothold in the Philippines? Security officials say there are reports that members of the Abu Sayyaf and certain criminal gangs in Mindanao have pledged allegiance to ISIS, but so far there is no verified direct link between Philippine armed groups and the extremists responsible for a string of large-scale terrorist attacks in the past weeks in France, Mali and Egypt.
While there may be no direct link, ISIS provides inspiration to extremists around the world. The Abu Sayyaf, which is believed to have earned hundreds of millions in ransom for kidnapped foreigners since last year alone, may have no need for funding and logistics support from ISIS. But other armed threats such as the Bangsamoro Islamic Freedom Fighters can use money, arms and training in the ways of mass destruction from the Islamic State.
ISIS has shown its capability for ruthless mass murder. In the Philippines where Islamist extremists have operated for decades, it is prudent to consider the likelihood of ISIS influencing more violent activities. Every effort must be made to prevent this from happening.