2016/03/31 20:33
http://english.yonhapnews.co. kr/news/2016/03/31/ 0200000000AEN20160331010900315 .html?input=www.tweeter.com? e52b9bb8?804ebca0
SEOUL, March 31 (Yonhap) — North Korea appears to have succeeded in designing both a re-entry vehicle for the KN-08 intercontinental ballistic missile and a nuclear warhead, although it has yet to build them, a U.S. defense magazine said Thursday.
Earlier this month, North Korean leader Kim Jong-un claimed that his country has built lighter and “standardized” nuclear warheads to fit atop ballistic missiles.
Citing recent satellite imagery, footage from North Korean media and computer analyses, IHS Jane’s said the country’s re-entry vehicles may be able to fly straight without losing their balance, while its nuclear warheads appear small and light enough to fit inside the vehicles. 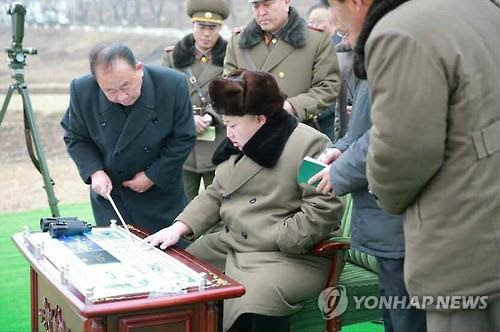 North Korean leader Kim Jong-un supervises a simulated atmospheric re-entry of a ballistic missile in this photo published in the North’s Rodong Sinmun newspaper on March 15, 2016. For Use Only in the Republic of Korea. No Redistribution. (Yonhap)
However, North Korea does not appear to have built them yet and will need to carry out further experiments to acquire the ability to deliver nuclear warheads on a missile, IHS Jane’s said in an e-mailed report.
The KN-08 is estimated to have a range of some 12,000 kilometers, which would make it capable of striking parts of the U.S. mainland. The North has yet to test the missile but such movements have reportedly been detected.
hague@yna.co.kr
(END)