MOSCOW, November 9. /TASS/. A Dutch submarine on Wednesday morning tried to approach the Russian aircraft carrier group in the Mediterranean and spy on it, Russian Defense Ministry spokesman Igor Konashenkov said on Wednesday.

“Earlier today, at 06:50 on November 9 the search and attack group consisting of anti-submarine ships The Severomorsk and The Vice-Admiral Kulakov spotted a diesel submarine of the Dutch Navy (presumably Walrus), which was trying to approach the Northern Fleet’s aircraft carrier group for surveillance purposes.”

Northern Fleet’s anti-submarine ships forced the submarine to leave the area where Russia’s Admiral Kuznetsov aircraft carrier was at the moment.

“The crews of two anti-submarine ships, The Severomorsk and The Vice-Admiral Kulakov, easily identified the submarine that was 20 kilometers away using the standard onboard hydroacoustics systems and data obtained from anti-submarine helicopters Ka-27 PL. Despite the submarine’s attempts to evade surveillance a stable hydroacoustic contact was established with it. The ships kept track of the submarine for more than an hour and forced it to leave the area of the aircraft carrier-led group,” Konashenkov said.

According to the ministry, the submarine’s maneuvers in the Mediterranean were dangerous and could have led to grave navigation consequences.

“The clumsy attempts to carry out dangerous maneuvers in the direct proximity of the Russian group of warships could have led to grave navigation consequences,” he said. 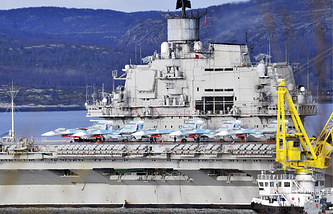 “Throughout its voyage, a Northern Fleet detachment regularly discovered NATO’s submarines along the route. Actions by USS Virginia, which was trying to spy on the Russian vessels, were recorded in early November,” Konashenkov said.

“Throughout its voyage, a Northern Fleet detachment regularly detected NATO’s submarines along the route. Actions by USS Virginia, which was trying to spy on the Russian vessels, were recorded in early November,” Konashenkov said.

“It is noteworthy that these large-displacement submarines are not meant for conducting surveillance,” he noted.

Konashenkov added that the Russian Navy’s aircraft carrier group during its movement along the agreed route keeps active all of its defense resources – the anti-submarine, anti-aircraft, anti-ship and anti-sabotage ones.

“Attempts by all foreign surface vessels, submarines and aircraft to approach the Russian Navy’s aircraft carrier group are monitored in real time, which is a regular marine practice and an element of practical combat training at sea,” Konashenkov said.

The Northern Fleet’s task force left for the North-Eastern Atlantic and the Mediterranean on a mission on October 15. It incorporates Russia’s sole aircraft carrier the Admiral Kuznetsov, the heavy guided missile cruiser Pyotr Veliki, two anti-submarine ships The Severomorsk and The Vice-Admiral Kulakov and logistics ships.