#Reviewing The Sterling Forest: What Happens Next In The Baltics?

Excerpt:
Strategists ask few truly new questions. The best ones ask the right old questions. They stand at the modern-day overlook and see familiar landscapes. They scan what’s out there knowing only one thing for sure: that knowledge is power only if that knowledge is used. What to do? Good hypotheticals become powerful binoculars. If a nation-state wants an edge over a rival, a better awareness of likely next steps is surely advantageous. In statecraft, there is no better set of binoculars than a great book. History is full of ill-informed rulers.

#Reviewing The Sterling Forest: What Happens Next In The Baltics?

The Sterling Forest. John Fenzel. Breathe Press, 2016.
Will Russia seize the Baltics? Our friends in Estonia, Latvia, and Lithuania are worried. Simultaneously, the background pincers of America’s retrenchment and the uncertain intentions of the incoming U.S. presidential administration press the leaders and peoples of those three countries. The bear is on the move. Georgia, Crimea, and the Ukraine had doubters. Not anymore. The Russians marched. Who’s next? The West looks warily eastward and asks: Will the supreme ruler (Putin, in this case) moderate his ambitions? Are they justified? Can he be appeased?
As I write this, NATO troops take part in an exercise with the Lithuanian military and Russia deploys new missiles to the Baltic region. Eyes are on those three tiny states.
Strategists ask few truly new questions. The best ones ask the right old questions. They stand at the modern-day overlook and see familiar landscapes. They scan what’s out there knowing only one thing for sure: that knowledge is power only if that knowledge is used. What to do? Good hypotheticals become powerful binoculars. If a nation-state wants an edge over a rival, a better awareness of likely next steps is surely advantageous. In statecraft, there is no better set of binoculars than a great book. History is full of ill-informed rulers.
History has battered the Baltic States. In just a century, their citizens have thrice felt the heels of neighboring empires. Twice they’ve known freedom and independence. Men that have previously lost those twin stallions, fear another loss most acutely. 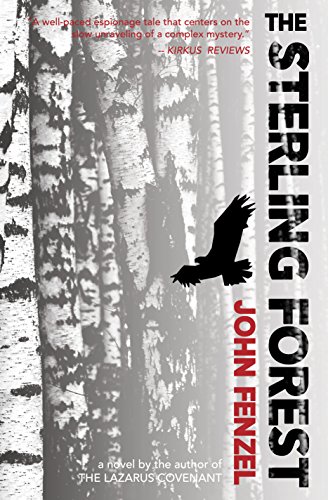 Good thriller writers resemble spy plane pilots. Reading their books is like strapping in for a high-altitude journey to the place, idea, or threat that the author wants you to see. In his newly published novel The Sterling Forest, John Fenzel, a highly experienced, senior Special Forces officer, brings us a riveting story cut straight out of current events. He artfully weaves incisive understanding of international affairs and Russia’s Baltic ambitions with a tale of intrigue, family, courage, and loyalty. Readers can expect vivid writing. Those especially interested in history and politics should anticipate a literary dogfight. Action comes fast. Serious stuff is at stake. What’s right matters. Female characters kick ass. And the suspense and tension sparking off the page makes you feel like Fenzel’s assistant gunner. All that is embedded in The Sterling Forest.
Written in the first person, and thereby personalizing a tough geopolitical challenge, Fenzel’s novel brings the hopes and dreams of believable characters nose-to-nose with the reality faced by our allies in the Baltics.

“There’s a haunted forest, with real ghosts, halfway between Moscow and Saint Petersburg. I’ve seen it for myself.”[1]

Fenzel’s use of characters’ journals and letters, interspersed throughout the book and including a contemporary, harrowing episode of an escape from Auschwitz, infuses this story with realism and plausibility far beyond most thrillers. For me, one of the most fascinating parts of the novel is the exploration of Lithuanian resistance movements. The dangers resistance fighters braved is remarkable. Some fought for decades. That kind of shadow fighting for that long of a period only happens when people are committed. The best commitments grow inside families. So resistance movements are often family affairs, and the fullness of one family’s involvement is this novel’s spine.
The debate about whether strategists should read fiction is an old one. Those opposed can never satisfactorily answer the question of how to speculate about the future without considering possible scenarios. It’s widely known that Abe Lincoln liked Shakespeare and that John Kennedy was an admirer of Ian Fleming’s James Bond. A little less well remembered is that Ronald Reagan was a fan of Tom Clancy. He received Clancy’s The Hunt for Red October as a gift, and famously called it “unputdownable.” The best leaders and thinkers are often ardent readers. Many enjoy thriller novels. One reason is this: they know they can’t change the past, but they could get blamed for the future.
Western nations need to understand what Russia’s intentions might be in the Baltics. A failure to do that, and consequently impact what she does, could be disastrous. We read history to learn about the past and find clues about the future. Fiction can help us think about what might come next. John Fenzel’s The Sterling Forest is a gripping, fantastic tale about exactly that. His writing generates empathy for the characters-crucial for good fiction-while at the same time making you think seriously about one of our country’s important foreign policy and defense tests. We inhabit a troubled and troubling world, so we owe our ear to men like Fenzel who spent years, in Teddy Roosevelt’s memorable words, “in the arena.” The author has walked the grounds and studied the people-friend and foe-of these regions, before and after the fall of the Soviet Union. He’s worked at high levels of our government and his counsel is respected. By reading his novel, readers just might get a jump on the future.
Claude Schmid is a retired Army officer who served around the world. A graduate of the Army War College, he’s an avid reader, public speaker, and charity volunteer. He’s the author of Princes of War: A Novel of America in Iraq.
Have a response or an idea for your own article? Follow the logo below, and you too can contribute to The Bridge:

Tags: #Reviewing The Sterling Forest: What Happens Next In The Baltics?

← Terrorists, Insurgents, Something Else? Clarifying And Classifying The “Generational Challenge”
The Spy Who Believes Hitler May Have Successfully Faked His Own Death: Classified Documents Reveal That The Fuhrer May Have Used A Secret Runway To Escape His Berlin Bunker To South America On A Luftwaffe Plane →