The Unification Ministry in Seoul announced Wednesday that Kim Yo-jong, presumed to be aged about 30, will be part of a high-ranking government delegation attending the Winter Olympic opening ceremony slated for Friday.

The team will be led by Kim Yong-nam, the nominal head of state. Kim Yo-jong is widely believed to be powerful and close enough to the leader to directly represent his views.

Kim’s visit could further boost the reconciliatory mood between the Koreas. Seoul wants to pave the way for the restoration of relations and possibly to talks for the denuclearization of the North.

Kim’s high status in the North Korean leadership and close blood tie with the leader raised expectations that she may serve as the reclusive brother’s representative to the South Korean government.

Unlike her ill-fated brothers, Yo-jong climbed the North Korean regime’s power ladder at an unprecedented speed.

She reportedly joined the Kim Jong-un regime in its initial stage, in 2012, before taking up a deputy director post in the Workers’ Party of Korea’s central committee about two years later. Ever since, Yo-jong has frequently been seen standing close to her brother at major state events, an indication of her closeness with him and the regime.

The Unification Ministry currently presumes that she is also serving as deputy chief of the all-important ruling party propaganda and agitation department.

Experts here said that having started early in her 20’s, Yo-jong’s role inside the current North Korea regime has already far exceeded what Kim Kyong-hui, once-powerful sister of late North Korean leader Kim Jong-il, did for her brother’s regime in the past.

She is also known to have spent two years together with the leader studying in Switzerland in the 1990s.

Such a special profile is expected to make Yo-jong the mouth and ears of Kim Jong-un when she meets with South Korean officials, especially at a time when Seoul is desperately handling the difficult task of broker talks between the North and the United States for denuclearization. 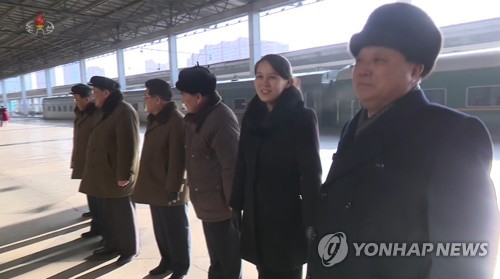 Kim Yo-jong (2nd from R) is featured by the North’s television news broadcast, released on Feb. 6, 2018, showing ranking officials as they see off a North Korean art troupe departing for South Korea. (Yonhap) [For Use Only in the Republic of Korea. No Redistribution]