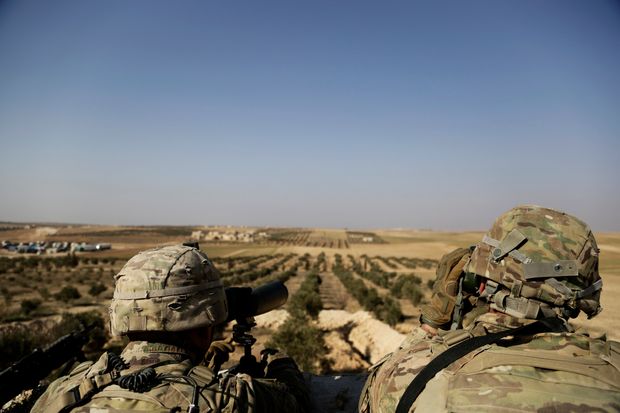 American troops looked out toward the border with Turkey from a small outpost near the town of Manbij, northern Syria, in February. PHOTO: SUSANNAH GEORGE/ASSOCIATED PRESS
By
Michael R. Gordon

WASHINGTON—The Trump administration is seeking to assemble an Arab force to replace the U.S. military contingent in Syria and help stabilize the northeastern part of the country after the defeat of Islamic State, U.S. officials said.

The initiative comes as the administration has asked Saudi Arabia, Qatar and the United Arab Emirates to contribute billions of dollars to help restore northern Syria. It wants Arab nations to send troops as well, officials said.

Details about the initiative, which haven’t been previously disclosed, have emerged in the days since the U.S.-led strikes on sites associated with the Syrian regime’s chemical-weapons capabilities.

Mr. Trump, who has expressed growing impatience with the cost and duration of the effort to stabilize Syria, alluded to the push on Friday night, when he announced the missile strikes.

“We have asked our partners to take greater responsibility for securing their home region, including contributing larger amounts of money,” Mr. Trump said.

In early April, Mr. Trump spoke about the need to speed the withdrawal of the 2,000 troops the U.S. has in Syria, a position at odds with many top advisers who worry that leaving the country too soon would cede ground to Iran, Russia, their proxies or other extremist groups. The new administration initiative is aimed at avoiding a security vacuum in Syria that would allow Islamic State to return or ceding hard-won gains to Iranian-backed forces in the country.

A spokesman for the National Security Council declined to comment about Mr. Bolton’s call to Mr. Kamel, who is widely regarded as one of the most powerful figures in the Egyptian regime.

Other officials, however, acknowledged the conversation and noted the administration had reached out to the Gulf states as well.

“Saudi Arabia, Qatar and the U.A.E. have all been approached with respect to financial support and more broadly to contribute,” an administration official said.

Egyptian military officials and a spokesman for the Egyptian president’s office couldn’t be reached immediately to comment.

Some military officials said that completing the defeat of Islamic State in Syria remains a challenge. Moreover, any move to assemble an Arab troop contingent that would be deployed after U.S. troops left would face obstacles.

Charles Lister, a senior fellow at the Middle East Institute, said that assembling a new force would be a challenge because Saudi Arabia and the U.A.E. are involved militarily in Yemen, and Egypt would be reluctant to defend territory that wasn’t controlled by the regime of President Bashar al-Assad.

Nor, he said, would Arab states be eager to send forces to Syria if the U.S. military didn’t agree to keep some troops there.

“There is just no precedent or established basis for this shaping into a successful strategy,” he said.

And many questions remain about whether the U.S. military would maintain some involvement in executing such a plan. U.S. troops in Syria, and the Kurdish and Arab fighters they work with, have been protected by American air power. It remains unclear what role, if any, U.S. warplanes might play and who would call in airstrikes if they were needed by a future Arab force.

“It has to be strong enough to face down Assad or Iran if either seeks to reclaim territory, perhaps with Russia’s help,” said Michael O’Hanlon of the Brookings Institution, referring to the new force.

In early January, U.S. military officials were hoping to wind up their campaign in Syria in a matter of months and keep troops to support a continuing State Department effort to stabilize Raqqa and other areas formerly under Islamic State control.

But that plan was upended by developments in the field. Many U.S.-backed Syrian Kurdish fighters have abandoned the fight against Islamic State and rushed toward the city of Afrin and other areas in northern Syria that have been attacked by Turkish troops.

Mr. Trump’s insistence that American troops come home as quickly as possible left administration officials scrambling to develop an exit strategy that would shift the U.S. burden to regional partners after Islamic State is defeated.

While estimates vary, 5,000 to 12,000 Islamic State fighters are believed to remain in eastern Syria, a U.S. official said. The militants are operating in two locations in a pocket south of the Syrian town of Al-Hasakah and in a 25-mile stretch along the Euphrates near the town of Abu Kamal, the official said. They have been trying to regroup and even forage for oil to sell.

The mission of the regional force would be to work with the local Kurdish and Arab fighters the U.S. has been supporting to ensure Islamic State cannot make a comeback and preclude Iranian-backed forces from moving into former Islamic State territory, U.S. officials say.

The idea also has caught the attention of Erik Prince, the private businessman who founded Blackwater USA and who has helped the U.A.E. and Somalia set up private security forces.

Mr. Prince said Monday that he has been informally contacted by Arab officials about the prospect of building a force in Syria but that he was waiting to see what Mr. Trump would do.

Egypt’s willingness to support a new effort in Syria is far from clear. With one of the largest armies in the Middle East, Egypt is preoccupied with a fight against the local branch of Islamic State in the Sinai Peninsula and with securing the country’s vast desert border with Libya, which is ruled by a patchwork of militias.

Egypt rarely has deployed troops abroad since the country sent more than 30,000 soldiers to join the American-led coalition fighting Iraq in the 1991 Gulf War, and its government sometimes has made statements supporting the authorities in Damascus, though it says it hasn’t taken sides in the conflict.

If Egypt didn’t want to send troops, it could help in other ways, such as by training Syrian fighters outside of their country and with logistics, some experts suggest.

The Trump administration effort isn’t the first aimed at generating greater regional involvement in Syria. During the Obama administration, then Defense Secretary Ash Carter repeatedly voiced hopes that Saudi and U.A.E. commandos would participate in the American-led offensive against Islamic State in northern Syria—to no avail.

Saudi Arabia and the U.A.E. have helped pay the stipends for the Syrian fighters the U.S. is supporting, American officials say.

Administration officials are calculating Arab nations will respond more favorably to a request from Mr. Trump, who already has asked Saudi Arabia to contribute $4 billion to restore former Islamic State-held areas of Syria.

—Jared Malsin in Cairo and Dion Nissenbaum in Washington contributed to this article.