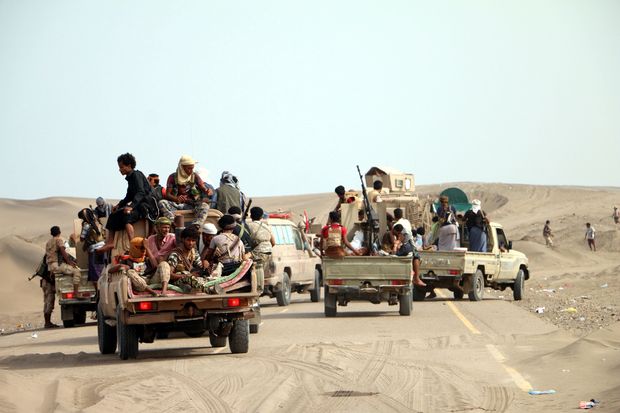 Yemeni forces backed by a Saudi-led coalition in the western province of Hodeidah in late May. PHOTO: EPA/SHUTTERSTOCK
By
Dion Nissenbaum

WASHINGTON—The Trump administration is weighing an appeal from the United Arab Emirates for direct U.S. support to seize Yemen’s main port for humanitarian aid from Iranian-backed Houthi fighters, according to U.S. officials, a move they worry could have catastrophic effects on the country.

Secretary of State Mike Pompeo has asked for a quick assessment of the UAE’s plea for assistance such as surveillance drone flights to help a Saudi-led coalition retake Hodeidah, which currently serves as a vital lifeline for the country’s 29 million residents, U.S. officials said.

U.A.E. and Saudi Arabian officials have assured the U.S. that they won’t try to seize the Red Sea port until they get backing from Washington, American officials said. But there is growing concern in the Trump administration that fighting around the city could spiral out of control and force Washington’s hand. Yemeni fighters backed by the coalition are battling Houthis near the city.

“We continue to have a lot of concerns about a Hodeidah operation,” said one senior U.S. official. “We are not 100% comfortable that, even if the coalition did launch an attack, that they would be able to do it cleanly and avoid a catastrophic incident.”

The debate over increasing U.S. support to the U.A.E. and Saudi Arabia is competing for the attention of top administration officials working furiously to prepare for the planned summit with North Korea in Singapore on June 12. But escalating military operations around the Yemeni port have triggered new urgency in Washington.

The U.S. and the Saudi-led coalition have agreed that U.A.E. forces overseeing military operations won’t enter the port in the near-term so that the United Nations’ new special envoy on Yemen, Martin Griffiths, can try to jump start moribund diplomatic efforts to end the fighting, according to one Arab official.

But there is broad concern that Yemeni forces aligned with the Saudi-led coalition will act on their own. 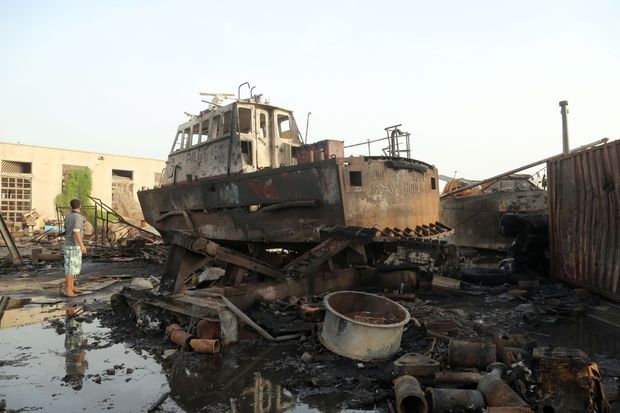 A worker inspected damage last month from an airstrike on the maintenance hub at the Hodeidah port. PHOTO: ABDO HYDER/AGENCE FRANCE-PRESSE/GETTY IMAGES

Top Yemen specialists in the U.S. administration are expected to meet on Monday to discuss what to do. Saudi Arabia and the U.A.E., which provides the main military backing for the Yemeni forces working to take Hodeidah, have long sought U.S. support for the operation.

Special forces from the U.A.E. and U.S. work together inside Yemen to target al Qaeda and Islamic State fighters while U.S. drones carry out airstrikes. The U.S. also sells weapons to the Gulf countries and helps to refuel Saudi and U.A.E. warplanes that carry out airstrikes—a move that concerns some U.S. lawmakers who worry about American culpability for civilian deaths.

For now, key administration officials involved in the debate harbor reservations about expanding American military involvement in Yemen, according to U.S. officials. But some see value in helping.

“We have folks who are frustrated and ready to say: ‘Let’s do this. We’ve been flirting with this for a long time. Something needs to change the dynamic, and if we help the Emiratis do it better, this could be good,’” the senior U.S. official said.

Some administration officials also are increasingly frustrated that military and diplomatic efforts both have bogged down, which is fueling efforts to curtail U.S. support for the fighting. U.S. lawmakers are looking at ways to cut off the sale of precision-guided missiles used by Saudi Arabia and the U.A.E. in Yemen.

President Barack Obama halted the sale of such “smart bombs” to Saudi Arabia in 2016, at the end of his administration. But the new administration lifted the ban soon after President Donald Trump took office, and officials are seeking congressional support for a new weapons sale to Saudi Arabia and the U.A.E.

Airstrikes by the Saudi-led coalition have killed more than 4,000 civilians in Yemen, according to U.N. estimates.

Saudi Arabia and the U.A.E. have emerged as vital allies of Mr. Trump. They joined the U.S.-led coalition that has pushed Islamic State to the brink of defeat in the Middle East. Saudi Arabia is also playing a central role in the Trump administration’s undisclosed plan for the Israeli-Palestinian conflict.

The war in Yemen draws high interest in Washington because of its strategic importance. Trump administration officials worry about Iran’s military support for the Houthis, who have fired an increasing number of advanced Iranian-made missiles into neighboring Saudi Arabia. Iran denies providing military aid to the Houthis.

U.S. officials also worry that the Houthis increasingly will threaten ships passing through the vital shipping lanes off the Yemeni coast—a fear that was reinforced last month when a missile hit a Turkish ship delivering humanitarian aid, causing minor damage. The White House issued an unusual statement denouncing the attack and blaming Iran.

Eighty percent of commercial and humanitarian supplies flows through Hodeidah, a central gateway. Saudi leaders routinely accuse Iran of using the port to smuggle missiles into Yemen—a charge Tehran rejects. U.S. officials have characterized the Saudi concerns as overblown—especially when balanced with the need to keep the aid lines open.

But the forces backed by the Saudi-led coalition are quickly closing in on the port, and they have vowed to seize it sooner rather than later. Aid groups say the operation could be disastrous in a country where millions of people are on the brink of famine.

“The push for Hodeidah is likely to exacerbate an already catastrophic security situation in Yemen,” said François Moreillon, head of the International Committee of the Red Cross delegation in Yemen

Top officials from the U.S., the U.K., Saudi Arabia and the U.A.E. recently met in the region to discuss the looming crisis.

U.S. and U.N. officials also worry about the impact on tenuous diplomatic moves to end the war. American officials are increasingly pushing the Saudi-led coalition to find a political end to the fighting.

Mr. Griffiths, the U.N.’s special envoy on Yemen, is supposed to present his proposal for resurrecting moribund peace talks to the U.N. Security Council in the next two weeks and has publicly warned that an attack on Hodeidah “would take peace off the table.”

“We are all very concerned about the possible humanitarian consequences of a battle for Hodeidah,” he said.

Write to Dion Nissenbaum at dion.nissenbaum@wsj.com

← North Korea Says Kim Jong-un Will Meet With Syria’s Assad
Are We Headed For A ‘Cyber Cuban Missile Crisis’ With Russia? →