Peace With Pyongyang: Legal Implications For The United States And South Korea

Excerpt:
A peace treaty may not be the only way to achieve progress in the resolution of the Korean Question, but it is hard to think of a more straightforward, flexible and impactful instrument in this context. At the same time, it is important to note that purposefully delaying or obstructing peace for leverage on legally distinct matters could violate the UN Charter obligations to settle disputes peacefully and in good faith.[43] States are also bound by the principle of non-intervention in internal and external affairs, which prohibits “coercion”—including but not limited to the threat or use of force—with regard to the sovereign matters of other states, such as “the choice of a political, economic, social and cultural system, and the formulation of foreign policy.”[44] Ultimately, the Korean people, just like all other peoples implicated in this crisis, have a right to peace.[45] 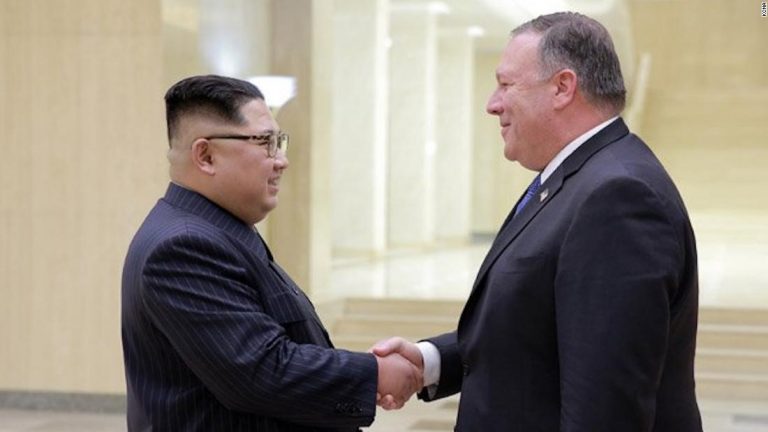 North Korean leader Kim Jong Un shakes hands with US Secretary of State Mike Pompeo in Pyongyang, DPRK, May 9, 2018. (Photo: Korean Central News Agency)Reaching a peace treaty to end the Korean War is frequently interpreted as a North Korean “trap” rather than as the key to resolving the nuclear crisis and the decades-old Korean Question in general.[1] Many fear that it could legitimize the DPRK (North Korea) as a nuclear weapons state, split the alliance between the United States and the ROK (South Korea), or even trigger a reunification under North Korean leadership. In fact, these are merely hypothetical political consequences that cannot come to pass against the joint will of Seoul and Washington. A peace treaty can raise the legal bar on using force on the Korean Peninsula, without legally implying the withdrawal of US troops from Korea, the dissolution of the US-ROK alliance, the start of a reunification process, the legalization of North Korean nuclear weapons or the lifting of United Nations nonproliferation sanctions. In short, a peace treaty is a versatile instrument that can be tailored to further US and South Korean interests in addressing the security challenges posed by North Korea.

Peace would raise the legal bar for using force on the Korean Peninsula. The legal effect of a peace treaty is to end a state of war between its parties, meaning they may not refer to matters settled by the treaty to justify any further use of force against each other.[2] By contrast, an armistice is traditionally understood as a temporary ceasefire agreement that does not end the state of war.[3] An armistice is only a weak safeguard, because the main consequence of serious violations is to give the other side a right to denounce it and to resume hostilities in due course.[4] The Korean War Armistice Agreement (KWAA) fits the traditional definition of armistices better than modern theories interpreting them as final settlements, as it was clearly not intended as conclusive.[5] The KWAA’s own provisions call for its replacement with a political settlement for peace;[6] in addition, it was never formally ratified,[7] was continuously violated by both sides[8] and was repeatedly denounced by Pyongyang.[9] Moreover, several UN organs have called for the KWAA’s replacement, including the General Assembly, the President of the Security Council, the Secretary-General and even the Commission of Inquiry on Human Rights in the DPRK.[10] That said, peace would not leave the ROK defenseless, as it does not prejudice the right of parties to resort to force again if legally justified by new instances of self-defense or Security Council authorization.[11]

Peace would nevertheless imply the dissolution of the so-called “United Nations Command” (UNC), as its sole remaining duty is the enforcement of the KWAA.[12] The UNC arguably fulfilled its original Security Council mandate by September 1950, when forces under the “unified command” of the United States repelled North Korean troops beyond the 38th parallel.[13] The UNC lingered on because its subsequent “rollback” invasion of the North ultimately implicated it in signing and monitoring the KWAA.[14] Nearly all UN Member troops left over the years, and the General Assembly already suggested the UNC’s dissolution as early as the 1970s.[15] Dissolution would not significantly affect combat capabilities of the US-ROK alliance, because the UNC’s operational control (OPCON) over US Forces Korea and ROK troops was overtaken in 1978 by the US-ROK Combined Forces Command (CFC).[16]

All belligerents to the Korean War are capable of concluding a peace treaty, but a treaty need not include all belligerents: it can end the state of war as between only some of them.[17] There is, therefore, a political element in determining which parties are the most relevant for meaningfully reducing tensions and helping resolve the Korean Question. The states that were most clearly belligerents are the DPRK, the ROK and the United States as the commanding authority of the UNC forces.[18] The other UN members that contributed troops were also belligerents,[19] but not the UN itself since it “did not at any time have any role in the command of the forces that operated in Korea under the Unified Command between 1950 and 1953.”[20] China is generally considered a belligerent, despite the artifice of a “volunteer army,” but has already normalized relations with the United States and ROK, suggesting an implicit end to the war as between these parties.[21] It is also important to note that an armistice and a peace treaty are legally distinct instruments: participation in the former is not a precondition to participation in the latter. It is irrelevant here that former ROK president Syngman Rhee refused to sign the KWAA, and neither the DPRK’s refusal to recognize the ROK as party nor the DPRK’s own denunciation of the KWAA precludes an ROK-DPRK peace agreement.[22] It is, therefore, possible to end the Korean War in substance by concluding in parallel a US-DPRK peace treaty and a ROK-DPRK peace agreement. 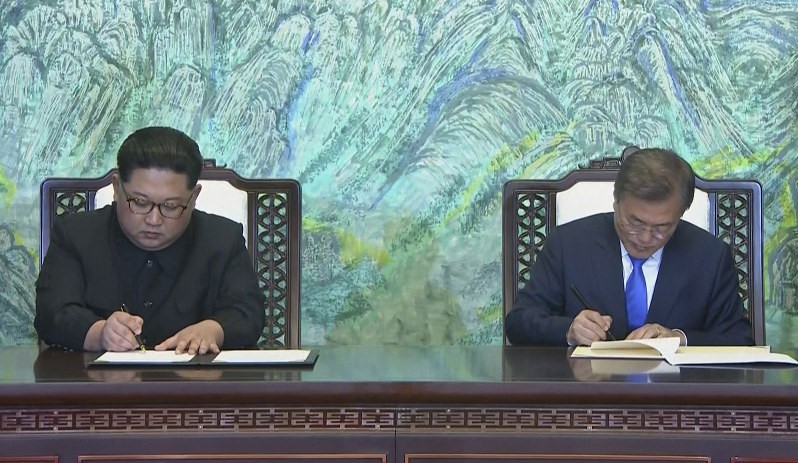 North Korean leader Kim Jong Un and South Korean President Moon Jae-in sign the Panmunjom Peace Declaration in Panmunjom, DPRK, April 27, 2018. (Photo: Inter-Korean Summit Press Corps)The Koreas can conclude a binding peace agreement even while mutually denying their sovereignty. Although a “treaty” can strictly speaking only be concluded between states, international law can also recognize as binding agreements concluded between subjects other than states, especially peace agreements.[23] While the Koreas can be characterized as two states—they are recognized as such at the United Nations—their insistence on seeing each other as one state with two authorities competing for legitimacy could detract from the full application of the law of treaties.[24] The Koreas have nevertheless already concluded several inter-Korean agreements which have been ratified following the constitutional procedure for treaties, formally expressing intent to be bound.[25] Note that the Panmunjom Declaration of April 27, 2018 would fall short of a peace agreement even if it were ratified, as it calls itself for follow-up meetings “with a view to declaring an end to the War and establishing a permanent and solid peace regime.”[26] Note also that a peace agreement cannot force the Koreas into a reunification model against their will; Seoul and Pyongyang only have a constitutional mandate to seek a particular type of reunification and thus can block any project that doesn’t fit this mandate.[27]

Distinguishing Peace and the US-ROK Alliance

Peace does not legally imply the dissolution of the US-ROK alliance or force Seoul to withdraw its invitation of US troops, as these are bilateral matters to be decided between Seoul and Washington.[28] States may as a sovereign prerogative invite foreign troops on their territory, within the limits of the principle of non-intervention, and the widespread state practice of maintaining foreign military bases in peacetime indicates that consent may be given independently of the existence of an active military threat.[29] Peace would have diminished Seoul’s original justification for the presence of the United States and other UN Members, namely the 1950 invitation to repel the DPRK invasion.[30] The conclusion of the US-ROK Mutual Defense Treaty in 1953 nevertheless provided an alternate basis to justify the continued invitation of US troops, one that was not tied to the existence of an active military threat from the DPRK.[31] Peace would not legally undermine the alliance treaty as it is drafted to remain in force indefinitely until either side decides to terminate it with one year notice.[32]

Peace could nevertheless legally affect the maintenance of the US-ROK CFC’s “wartime OPCON” over ROK troops, given the reduction of military needs that justify this arrangement. OPCON stands for the delegated authority to direct the operation, training and organization of forces.[33] Seoul delegated OPCON over its armed forces to the UNC from 1954 to 1978, and to the CFC since 1978.[34] From 1994 onward, Seoul has reduced the delegation to the point where it now retains OPCON over its armed forces by default and only delegates it to the CFC in “wartime,” i.e. if hostilities break out.[35] Peace would at least partially fulfill the stated conditions for ending the delegation: “the ROK will assume wartime OPCON when critical ROK and Alliance military capabilities are secured and the security environment on the Korean Peninsula and in the region is conducive to a stable OPCON transition.”[36] 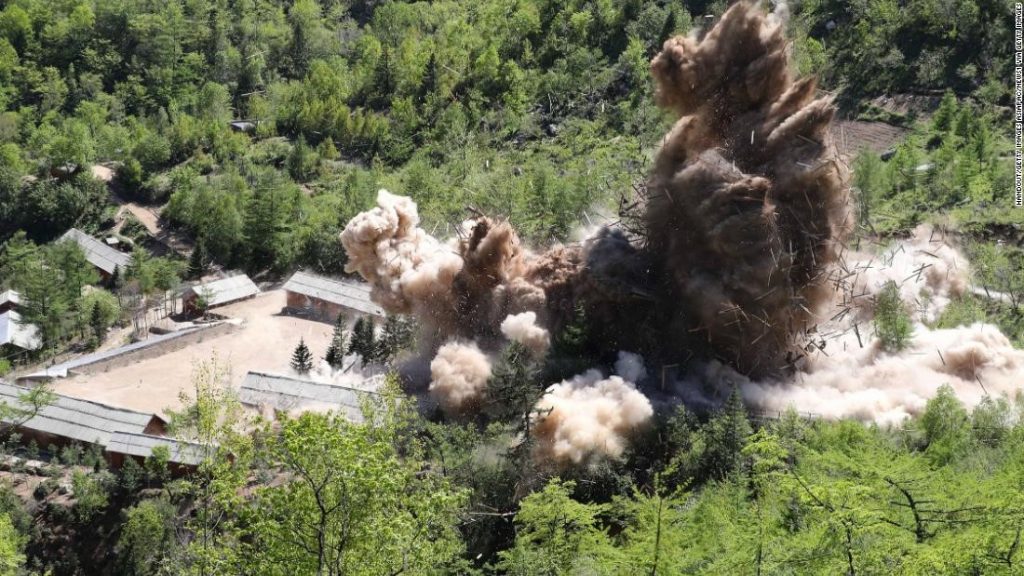 Demolition operation at the North Korean nuclear test site in Punggye-ri, DPRK, May 24, 2018. (Photo: Yonhap News Agency)Peace does not legalize North Korean nuclear weapons. Short of a threat or use of force violating article 2(4) of the UN Charter, the DPRK’s mere development or possession of nuclear weapons does not violate customary international law, as the law does not include any rules “whereby the level of armaments of a sovereign state can be limited,” or “any comprehensive and universal prohibition of the threat or use of nuclear weapons as such.”[37] Development and possession of nuclear weapons would violate the Nonproliferation Treaty (NPT), but the DPRK declared withdrawal in 2003 by invoking the art. X right of each party “to withdraw if it decides that extraordinary events… have jeopardized the supreme interests of its country.”[38] Even if it were still a party, the DPRK could not be recognized as an authorized “nuclear weapons state” under the NPT because it has not “manufactured and exploded a nuclear weapon… prior to 1 January 1967.”[39]

Peace does not legally imply lifting UNSC sanctions: they are not legally based on a violation of the NPT, but on the violation in particular of UNSC resolution 1718, which singles out DPRK nuclear weapons as a particular threat to international peace and security.[40] While the DPRK has argued that these resolutions illegally infringe on its inherent right of self-defense, peace would not affect the debate on whether the UNSC had or had not abused its authority under the Charter when it adopted the sanctions.[41] In this sense, it appears possible to conclude a peace treaty before denuclearization, as a security guarantee, without prejudice to the maintenance of nonproliferation sanctions as leverage to then enforce full denuclearization.[42]

A peace treaty may not be the only way to achieve progress in the resolution of the Korean Question, but it is hard to think of a more straightforward, flexible and impactful instrument in this context. At the same time, it is important to note that purposefully delaying or obstructing peace for leverage on legally distinct matters could violate the UN Charter obligations to settle disputes peacefully and in good faith.[43] States are also bound by the principle of non-intervention in internal and external affairs, which prohibits “coercion”—including but not limited to the threat or use of force—with regard to the sovereign matters of other states, such as “the choice of a political, economic, social and cultural system, and the formulation of foreign policy.”[44] Ultimately, the Korean people, just like all other peoples implicated in this crisis, have a right to peace.[45]