Even the service’s smallest units will soon have the ability to scout ahead and see into hard to reach spaces from behind cover.

After more than four years of experimentation and evaluation, the U.S. Army is beginning to send out FLIR Systems’ tiny Black Hornet nano drones to operational units, which will fundamentally change how the service conducts itself on the battlefield. The miniature unmanned helicopter will give the elements as small as infantry squads a significant boost in situational awareness and allow them to scout ahead without having to automatically put soldiers at risk.

On Jan. 9, 2019, the Army revealed that the Soldier Sensors and Lasers (SSL) division of Rock Island Arsenal’s Joint Manufacturing and Technology Center (RIA-JMTC) had delivered the first 60 complete Black Hornet systems to unspecified units. Then, on Jan. 24, 2019, FLIR Systems announced it had received a contract worth up to $39.6 million to deliver thousands more of the drones to the service, along with associated equipment, in the coming years.

“The equipment is getting smaller and the reason it’s getting smaller is so the Soldier can be equipped with this,” Sunny Koshal, the chief of the Soldier Support Branch at RIA-JMTC said in an official interview in January 2019. “This thing, you can really pocket it and just carry it.”

The latest Black Hornet 3, which FLIR Systems also calls the Personal Reconnaissance System (PRS), weighs less than a tenth of a pound and is just under seven inches long. The complete system comes with a docking station for two drones that keeps them protected when not in use, as well as a hand-held touchscreen device and a controller.

All of this, along with a number of other more minor parts, as well as the user’s manual, comes inside a foam-lined, ruggedized container. But the basic components necessary to use the Black Hornet in the field could easily fit inside a soldier’s backpack.

For its compact size and weight, the system, which the Army officially calls the Soldier Borne Sensor (SBS), offers impressive capabilities. Each Black Hornet has two daytime video cameras, as well as a thermal imager. All of these systems can capture still images for further analysis, too.

During nighttime operations, the drone fuses the feeds from both its electro-optical the thermal imaging system to create higher fidelity imagery. This makes it easier for the operator to positively identify individuals as hostile, rather than just innocent bystanders, or otherwise examine other objects of interest in the dark. 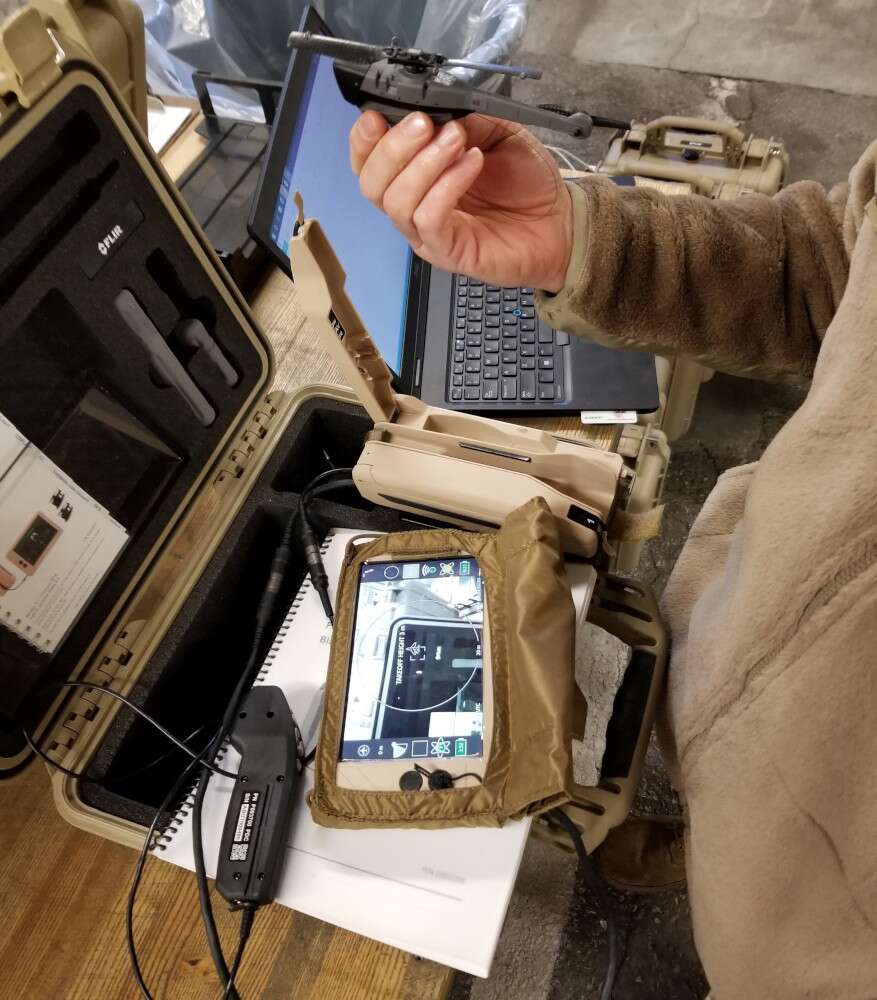 A good look at the contents of each complete Soldier Borne Sensor system package.

It can stay aloft for up to 25 minutes and has a maximum range of 1.24 miles, allowing the operator to send it well ahead of their position to look for threats and other items of interest. It’s very quiet, too, allowing troops to use it regularly, day or night, without being worried that it might give their position away.

Black Hornet has a line-of-sight link, as well as a GPS-enabled beyond-line-of-sight navigation capability. The operator can use the controller to pilot the unmanned helicopter manually, observing its activity through the cameras in its nose via the touchscreen display. The drone is also capable semi-autonomous operation, following preset waypoints, and can return to the user as programmed or on demand.

It also has a feature that will send it back in the direction of the operator’s position if it gets jammed or the encrypted control link otherwise ends up broken. FLIR Systems offers a Vision-Based Navigation capability for GPS denied environments and for operating indoors, where the control signal could easily get blocked, but it’s not clear if the Army has purchased Black Hornets with this specific capability. Vision-based navigation is an autonomous mode where the drone uses the feeds from its cameras, coupled with a computer algorithm, to determine its relative position and avoid obstacles. 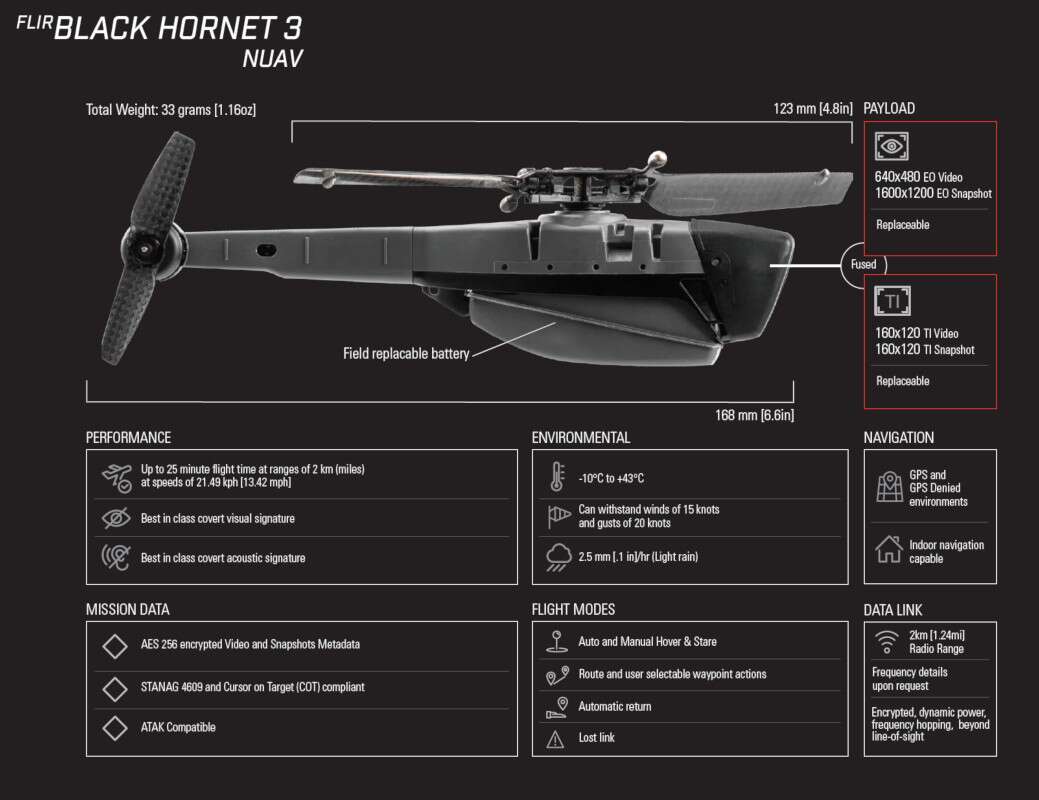 A closer look at the Black Hornet and its features.

It would certainly be a valuable feature given the growing threat of enemy electronic warfare systems, as well as the U.S. military’s increasing interest in being prepared to fight in dense, built-up areas. The Army, among others, is also preparing for the possibility that subterranean warfare, involving fighting through caverns and underground complexes of various types, could be another significant component of future warfighting.

“The main purpose of this mission is to provide security, safety, and alertness to the Soldiers where the enemy is at all times,” Koshal, the branch chief at Rock Island Arsenal said. “Bottom line is it will keep the Soldier safe.”

Even just in day-to-day operations, Black Hornet will give Army soldiers an impressive boost in awareness about their surroundings, allowing them to make better-informed movements and out-maneuver opponents. It also offers a new way to reduce vulnerability to a host of threats, including ambushes, improvised explosive devices, or just what might be hiding on top of a roof or the other side of a wall. It could also help small units to more quickly and accurately assess the impact of artillery or air strikes and determine whether more fire support is needed and where.

It’s a relatively cost-effective way to upgrade the capability of small units, too, with a unit price per complete system of between $15,000 and $20,000, according to the Army’s budget request for the 2019 Fiscal Year. The service’s hand-launched RQ-11 Ravens, among the service’s most common small drones in widespread service now, cost around ten times more each and are exponentially larger than the Black Hornet.

It’s a capability that’s been some time in the making, too. The Army’s Natick Soldier Research Center first began experimenting with what was then known as the Prox Dynamics’ PD-100 Black Hornet in 2014 as part of the Cargo Pocket Intelligence, Surveillance, and Reconnaissance (CP-ISR) program. 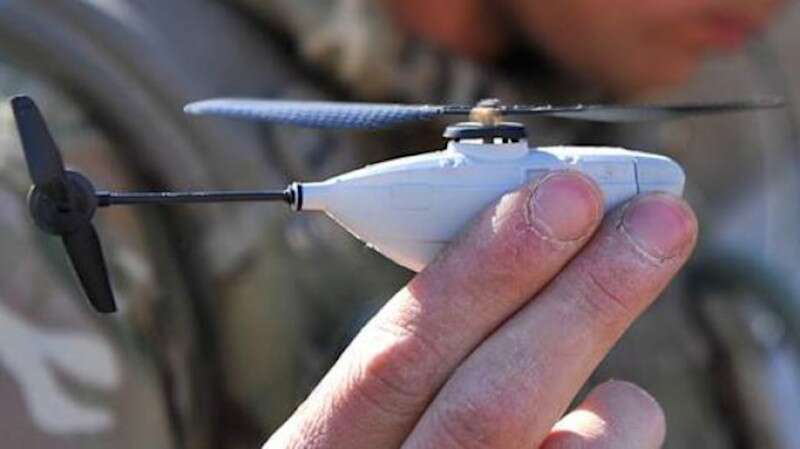 Two years earlier, the U.K. Armed Forces began using the very early versions of the Black Hornet in Afghanistan. The U.K. Ministry of Defense said that the system had been withdrawn from use sometime between 2016 and 2017 in favor of larger hand-launched drones, such as the Lockheed Martin Desert Hawk III, that offer significantly greater capability over the first generation PD-100s. As of 2016, the Black Hornet was reportedly in service or under evaluation in nearly 20 different countries.

FLIR Systems also bought Prox Dynamics in 2016 and has been continuing development of the drone since then. The latest Black Hornet is a far cry from the original PD-100, featuring a significantly more robust design and improved performance.

Since then, U.S. special operations forces and the U.S. Marines have also evaluated the Black Hornet as part of similar efforts to improve the situational awareness of small units in the field. For special operations forces, which might be operating well away from friendly lines and larger conventional forces, having a good, real-time picture of their surroundings could be essential. It could also increase their ability to conduct special reconnaissance operations, potentially deep in denied areas, but allow for a greater standoff distance to the actual target, reducing the risk of the mission getting compromised.

In 2018, FLIR Systems also unveiled a larger dock/launcher for up to eight Black Hornets that a user could mount on a vehicle, as well. Armored vehicles, in particular, typically offer poor visibility when the crew is “buttoned up” inside, which can increase their vulnerability to dismounted infantry attacking from the sides or the rear, especially in confined spaces, such as urban environments. Known as the Vehicle Reconnaissance System (VRS), FLIR’s vehicle-mounted system could help reduce the risk of hostile forces getting the jump on an individual vehicle, or a larger convoy, especially while fighting through a congested cityscape.

The Army is now considering adding a small unmanned aircraft capability to whatever armored vehicle design it chooses to replace the Bradley Fighting Vehicle. The existing purchases of Black Hornets for dismounted units could make it an attractive option for this requirement, as well.

With the service now buying large amounts of them for widespread distribution among regular units, other branches of the U.S. military, as well as American allies and partners, may be quick to follow suit. Regardless, nano drones are now literally on the way to becoming a standard piece of infantry equipment across the Army, which will have a dramatic impact on the way it conducts even the most routine operations.