The Botched Niger Mission Was A Leadership Failure. I’ve Seen It Happen Before.

The Botched Niger Mission Was a Leadership Failure. I’ve Seen It Happen Before. 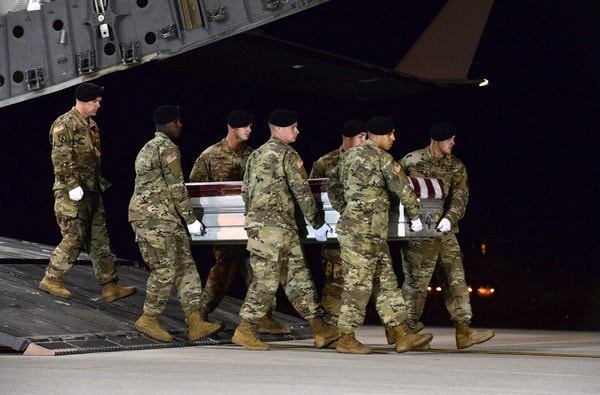 In a photograph released by the military, the remains of Staff Sgt. Dustin M. Wright were returned to Dover, Del., in October 2017 after he and three others were killed in an ambush in Niger.CreditAaron J. Jenne/U.S. Air Force

A few months ago, I sat at a friend’s kitchen counter drinking whiskey and sharing deployment stories. He asked me if there was one I’d never told anyone. I realized it had been a year since the Niger mission that left four American service members dead and sparked questions about the United States’ role in the region. So I told him about Oaken Sonnet, a similarly botched mission that took place in 2013, and about why it still haunts me.

The week before Christmas in 2013, I was one of two intelligence officers who took the initial report of an attack on American forces in South Sudan that the American public has not heard enough about. If it had — and if the American military had studied the mistakes made in the mission’s planning and learned from them — the loss of those four soldiers in Niger in 2017 might have been avoided.

[For more articles about the experiences and costs of war, sign up for the weekly At War newsletter.]

I was part of a Special Operations detachment stationed in the Arabian Peninsula. A few of my teammates were on loan to a Special Operations unit based at Camp Lemonnier, a large military installation in Djibouti. They had been assigned to evacuate American citizens from a United Nations compound in Bor, South Sudan, the center of violence in a civil war that had broken out days before. Because my teammates fell under the operational control of United States Africa Command, our own commanding officer had no say in their employment, and our unit could not be involved in mission planning, including intelligence support. Their mission, which was ultimately overseen from Stuttgart, Germany, was briefed by intelligence teams based in Djibouti and Stuttgart as being in a “permissive environment,” meaning it was supposed to be low-risk.

On Dec. 21, three CV-22 Ospreys carrying my teammates, and their flight crews from the Air Force’s Eighth Special Operations Squadron, came under hostile fire from a South Sudanese armed group outside the compound. Four people on board were injured by gunfire, and one of them from my team was catastrophically wounded. He survived, but he ended up losing a leg.

After they evacuated to safety, the team leader called to make a report. Another teammate and I, responsible for collecting information and reporting on threats, sat in a hangar and listened as he calmly described what he had seen and heard. We followed our training: listening dispassionately and asking follow-up questions to gather as many details as possible, then writing our report in an expedient manner for circulation to the intelligence community.

The three aircraft never landed in South Sudan. As soon as the four service members were shot, they turned around and used aerial refueling to fly 500 miles to land in relative safety in Entebbe, Uganda. There, a cargo aircraft eventually evacuated the wounded to Kenya and, later, Germany. The American citizens they had been sent to extract were successfully evacuated the following day to Juba in United Nations and civilian aircraft.

Once I submitted the initial report, I felt the rush of emotions I had suppressed for the previous hours. I grieved from the knowledge that my teammates had been compromised by poor planning. I wandered our compound — relatively safe and out of harm’s way — in a daze. The intelligence briefing they had received did not prepare them for resistance from armed groups on the ground. There had been an insufficient medical-evacuation plan.

Eventually Oaken Sonnet made the news — damaged American military aircraft turning up unexpectedly at an airport in Uganda probably helped. But it received little examination in terms of what went wrong. There was no public call for the ambush to be investigated. A batch of stories eventually emerged that focused on the heroism of the aircrews, and how they managed to fly partially disabled Ospreys to safety. No coverage focused on the poor planning that preceded the mission. As far as I know, Congress never took an interest in what happened.

Almost four years later, a similar failure of leadership and mission planning happened to a Special Forces team in Niger, except this time people died — a result that prompted inquiry at the highest levels of military leadership, in Congress and by the media. According to the military’s investigation, the leader of the special forces team pushed back on the mission, citing insufficient equipment and intelligence, but his concerns were ignored by officers up the chain of command, and his team was forced into a situation they weren’t prepared for. They were ambushed by local fighters with links to the Islamic State group and four American service members, four Nigerien soldiers and an interpreter ended up dead.

The failures of Oaken Sonnet and later in Niger defied core military principles: that commanders who send troops on dangerous missions must thoughtfully evaluate the risks and be fully prepared to support their forces on the ground. These tenets are sacrosanct and are part of the reason that service members confidently volunteer to go into harm’s way. If there had been more accountability in 2013, perhaps we would have had a higher standard for planning and executing high-risk missions in 2017.

After the Pentagon announced the deaths in Niger, my phone buzzed with a text message from the other intelligence officer who took the South Sudan intelligence report with me. Her message contained two words: “Oaken Sonnet.” She was thinking the same thing I was. We commiserated with a shared sense of powerlessness over Niger, just as we had back in 2013. I cried for the first time for people I didn’t know: Bryan Black, Jeremiah Johnson, La David Johnson and Dustin Wright, the four noncommissioned officers killed in Niger. I know they lived for their country, died serving it and may have been betrayed by inadequate planning, incomplete intel, and lapses in leadership, long before the first shot was fired at their patrol in late 2017.

Andrea N. Goldstein is a United States Navy veteran. She is a Pat Tillman Scholar and a member of the Truman National Security Project’s Defense Council. She lives in upstate New York. Follow her on Twitter: @AN_Goldstein.

Get the weekly At War newsletter delivered to your inbox. Sign up here.

← K2 Not Named The ‘Killer Mountain,’ For Nothing: British Climber Who’s Mother Died On K2 Goes Missing On Pakistan’s ‘Killer Mountain’
Britain’s Economy Set To Soar….Because Of Brexit; The EU Is Quietly Seizing Control Of Its Members’ Finances →