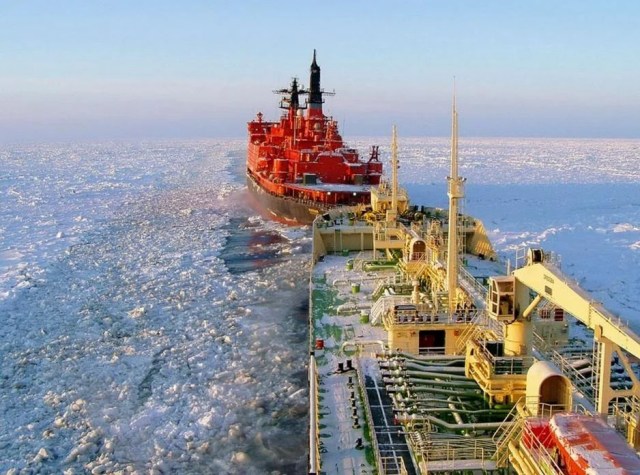 The steady and costly buildup of military might in the Arctic has apparently reached a level sufficient for Russia to claim sovereign rights over international waters along the entire length of the Northern Sea Route (known in Russian as Sevmorput), from the Barents Sea in the west to Alaska and the Bering Strait in the east. Deputy Prime Minister Yury Borisov told journalists, “This territory [the Arctic] is within the sphere of Russian interests. We will not give it away or let it slip away,” despite Washington’s claims that these are international waters (Militarynews.ru, March 3). According to the pro-Kremlin daily Izvestia, the Russian government has approved a draft document requiring “foreign navies [to] post a request with Russian authorities to pass through the Sevmorput 45 days in advance, providing detailed technical information about the ship, its crew and destination.” Moscow may allow or ban any such request, as it sees fit; and Russian maritime pilots must be present aboard foreign naval ships while they are within Sevmorput waters. Russia reserves the right to use military force to defend its sovereign rights, to arrest intruder ships, or to sink and destroy them. Long-range missile-carrying naval ships potentially threaten vital Russian strategic targets while in the Sevmorput and may also cause ecological damage. The fact that Sevmorput waters partially lie outside Russia’s 12-nautical-mile territorial waters limit is seen by Moscow as insignificant. The Sevmorput is a Russian national treasure that must be protected (Izvestia, March 6).

The chair of the Duma (lower chamber of the Russian parliament) defense committee and a former commander of the Airborne Troops (Vozdushno-Desantnye Voyska—VDV), Colonel General (ret.) Vladimir Shamanov, confirmed the government is drafting navigation rules for the Sevmorput. He added that the Duma may make these rules more stringent to prevent foreign military activity is the Arctic: “We will not stand idly by while they [the United States and the North Atlantic Treaty Organization, NATO] flex their muscles close to our shores.” The Duma may demand that armed Russian Federal Security Service (FSB) border guards board foreign naval ships in the Sevmorput in addition to maritime pilots; and “other measures may be taken to deny foreign naval activities.” According to Shamanov, the Kerch Strait incident on November 25, 2018, when Russian naval ships and aircraft used violent force to attack and capture Ukrainian gunboats to deny them passage into the Sea of Azov, “has taught us [Russia] an important lesson.” Russia claims the Kerch Strait as its internal waterway in which the international law of the sea does not apply. The Sea of Azov and the strategically important Sea of Okhotsk in the eastern Pacific are also claimed as internal waters in which free foreign passage must be denied by force if necessary (Interfax, March 11).

Apparently, the Kremlin’s plan is to officially enact the new rules claiming sovereign rights over Arctic waterways by summer 2019, before the floating pack ice begins to melt and the annual navigation season begins. The timing of Russia’s official claim of control over Arctic waters is important—it was evidently planned to coincide with the opening of multiple Russian military bases in the Arctic. Russia first developed and deployed the means to “defend the Arctic” and take “emergency measures,” according to Shamanov, to be able to attack and sink any trespassers if they do not comply. Thus, Russia has only pushed forward its legal claims after acquiring superior military capabilities in the region.

New or renovated airbases have been built on Novaya Zemlya, Franz Josef Land and the New Siberian Islands. The Russian military claims these bases will soon be operational year-round—that is, including during the polar night (Militarynews.ru, March 11). In 2014, Russia’s Northern Fleet was transformed into a separate strategic inter-service command, with air force and army armored units—equivalent in status to a military district. According to the present Northern Fleet commander, Admiral Nikolai Evmenov, his forces have been reinforced with new ships, submarines, aircraft and Т-80BVM tanks specifically designed to fight in the Arctic. During the strategic Vostok 2018 war games, a naval task force sailed from its main base in the Kola Peninsula to the Bering Strait and back again—the first time it had accomplished such a feat within one navigation season—and it took part in military exercises along the way. Cold War–era Soviet airbases in the Arctic have been renovated and reactivated. In addition, new anti-aircraft and missile bases have been built. An air-defense base is being constructed in the port of Tiksi (Sakha Republic), on the Arctic shore of the Laptev Sea, southeast of the Lena River delta. On Kotelny Island (part of the New Siberian Islands archipelago), a Soviet airbase has been renovated and a long-range Bastion anti-ship missile battery deployed there; it was test fired in 2018 (Redstar.ru, March 11).

Because of climate change, the floating pack ice is melting. In August–September, the waters are now often clear for ship passage—something that was never possible during the 20th century. But still, Russia is building a massive fleet of nuclear-powered icebreaker ships to guarantee that the Sevmorputremains open to ship traffic. The disappearing ice is seen as an opportunity to develop oil, natural gas and other natural resources of the Russian Arctic, but the clear waters could also invite foreign trespassing. The K-300P Bastion-Ps, armed with Oniks P-800 anti-ship missiles and deployed on Kotelny Island, have a range of 600 kilometers; yet, they are located over 2,000 kilometers from Alaska, in the in Laptev Sea, where no one has ever before observed a foreign ship. Admiral James Foggo, the commander of the US Naval Forces Europe and Africa and Joint Forces Command Naples, has denounced Russian claims to control the Arctic: “It’s nobody’s lake.” Russian officials and commentators in turn have ridiculed Foggo, insisting the US does not have the equipment or icebreakers to operate in the Arctic and should refrain from such comments (Rossyiskaya Gazeta, February 22, 23). The scene thus looks set for a potential clash sometime in late summer, when the ice again recedes.