March 27, 2019 · by Support CMShelplive · in China, CIA, Department Of Defense, DIA, espionage, spying, Intelligence Community, military history, national security, North Korea, South Korea, Spain · Leave a comment
David Maxwell Comment:  “I can say with some certainty that Adrian Hong and his “team” were not trained or advised by professionals in the intelligence or special operations communities.  No one would have advised them to use “fake weapons” in a raid on a north Korean embassy.  If this group did conduct this action It was likely on their own.  I still think it is possible that it was done by the north Korean security services though i suppose the Spanish extradition petition seems to make a good case of Adrian Hong and his Free Joseon organization.” 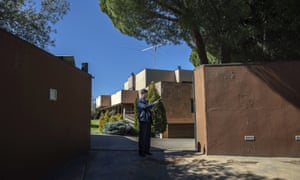 National court judge Jose de la Mata has lifted a secrecy order, announcing it had found evidence of various crimes, including trespassing, injuries, threats and burglary committed by ‘a criminal organisation’. Photograph: Bernat Armangué/APA secretive dissident group seeking to overthrow the regime in North Korea has claimed responsibility for last month’s raid on the country’s embassy in Madrid, as a court in Spain prepared to seek the intruders’ extradition.

Cheollima Civil Defence said in statement posted on its website that the 22 February raid on the embassy was “not an attack” and claimed that its members had been responding to an “urgent situation” inside the embassy. The intruders fled with computers, hard disks and other items after a failed attempt to persuade an embassy official to defect.

The raid took place less than a week before the North Korean leader, Kim Jong-un, met Donald Trump in Hanoi for denuclearisation talks, prompting speculation that the group was attempting to obtain information about North Korea’s former ambassador to Spain, Kim Hyok-chol.

Kim, who was expelled from Spain in September 2017 after the North conducted its sixth nuclear test and launched ballistic missiles over northern Japan, now serves as the regime’s top nuclear negotiator with the US.

The group denied it was working with the FBI or any other foreign organisation.

“The Hanoi summit had no relation to this operation. We recognise and apologize for any inconveniences caused to the authorities of Spain, who have been caught in the middle of a difficult situation,” the statement said.

But it appeared to confirm reports that one of its members had contacted the FBI days after the raid, saying it had “shared certain information of enormous potential value” with the bureau “under mutually agreed terms of confidentiality.”

It added: “This information was shared voluntarily and on their request, not our own. Those terms appear to have been broken.”

The group denied its members had been carrying weapons or had used force during the raid.

“We were invited into the embassy, and contrary to reports, no one was gagged or beaten,” the statement said. “Out of respect for the host nation of Spain, no weapons were used. All occupants in the embassy were treated with dignity and necessary caution.”

The statement said the North Korean regime was “simply a giant criminal enterprise”.

“The regime’s embassies and offices are hubs of illicit narcotic and arms trafficking… they are launchpads for global cyber attacks and thefts, assassinations, kidnapping and hostage-taking.”

The US government denied any involvement in the raid, shortly after reports that Spanish high court judge José de la Mata planned to request the extradition from the US of members of the group, which also uses the name Free Joseon.

Spanish high Court documents have identified three members of the group: Adrian Hong Chang, a Mexican citizen who lives in the US and who is believed to have led the 10 intruders, a US citizen and a South Korean.

De la Mata’s 14-page summary described in detail how members of the gang spent days preparing for the raid.

When Spanish police arrived at the embassy in the middle of the raid, Hong Chang managed to ward them off by pretending to be a diplomat, the Spanish newspaper El País reported. 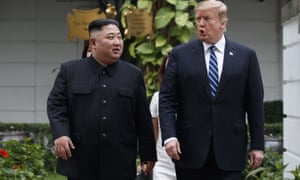 The raid came a week before Kim Jong-un and Donald Trump met for their second summit in Hanoi Photograph: Evan Vucci/APDonning a traditional jacket with a Kim Jong-un lapel badge, he persuaded officers he was a senior North Korean diplomat and that everything was normal inside the compound. Hours later, he was on his way to Lisbon, where he caught a flight to New York and five days later sought out FBI officials.

Reuters quoted a judicial source as saying that de la Mata believes all of the identified suspects fled to the US after the raid, adding that he would request their extradition to Spain. The suspects face up to 28 years in prison.

According to the high court documents, the dissidents, armed with knives and fake guns, forced their way into the embassy and made off with a mobile phone, computers, hard disks and USB pen drives.

Three of the intruders, identifying themselves as members of a human rights group seeking the liberation of North Korea, took the embassy’s commercial attaché, So Yun-sok, into the basement and encouraged him to defect. When he refused, the men tied him up and left him in the room, the documents said.

← An ‘Iran/Syria Belt & Road’: A Far-Reaching Geopolitical Strategy Unfolds
‘How Is Yoda?’: An Appreciation Of Andy Marshall →