Potential Consequences Of Spying On The Trump Campaign

Potential Consequences of Spying on the Trump Campaign 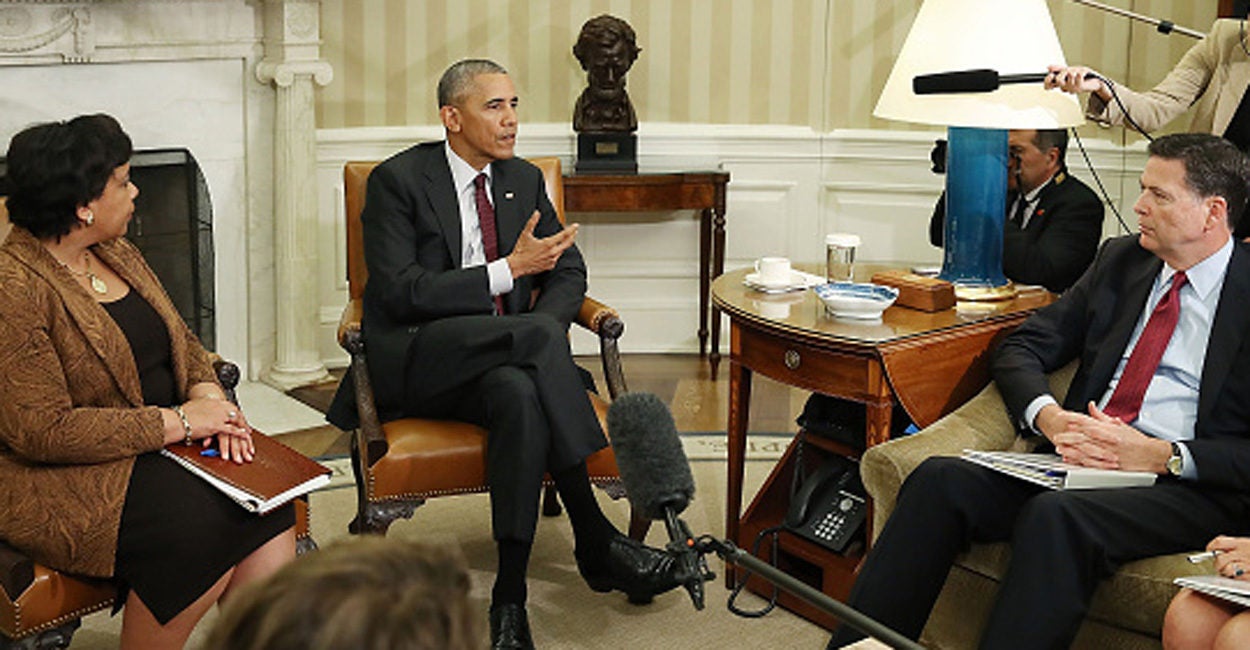 President Barack Obama , flanked by Attorney General Loretta Lynch and FBI Director James Comey, speaks to reporters after meeting with them in the Oval Office at the White House on July 19, 2016. (Photo: Mark Wilson/Getty Images)

Actions by Justice Department officials in spying on a Donald Trump campaign adviser in 2016 could be a crime or merely an administrative offense, legal experts say.

Crimes could include perjury or misleading a court, they say, while disciplinary action for an administrative offense could mean being fired or losing a law license.

Barr also indicated that he planned a further review of  government “spying” on the Trump campaign.

The liberal Left continue to push their radical agenda against American values. The good news is there is a solution. Find out more >>

What’s known is that the Obama administration’s Justice Department obtained a warrant under the Foreign Intelligence Surveillance Act, or FISA, to conduct electronic surveillance on Page in October 2016.

The inspector general’s review is looking at whether Justice Department or FBI officials did anything improper in obtaining the warrant approved by a federal judge.

“Before looking at the legality, the department should examine the process behind getting a FISA warrant against a presidential campaign. That’s something that should be approved by the attorney general first,” John Yoo, a former assistant U.S. attorney general under President George W. Bush, told The Daily Signal.

Domestic spying on political opponents was a big part of what prompted the FISA law in the 1970s after President Richard Nixon’s administration, the goal being to put a check in place.

“The whole point of FISA was because Nixon was spying on political opponents,” said Yoo, now a law professor at the University of California at Berkeley. “This seems to have violated the purpose of FISA, which is to make sure surveillance is always merited [and] is not political.”

After the Watergate scandal, which led to Nixon’s resignation, Congress was concerned about how the Nixon administration used the FBI and the CIA to target political opponents.

Sen. Frank Church, D-Idaho, chaired a select Senate committee that investigated intelligence gathering. The 1978 FISA law was an outgrowth of what was called the Church Committee.

Prosecutable crimes might have been committee by Justice Department personnel, said Robert Ray, who as an independent counsel completed the investigation of President Bill Clinton.

“The FISA court is in place to ensure the careful use of tools in the tool box, and to have oversight of the potential collision with the political process,” Ray told The Daily Signal. “This is always a big deal when you mix politics and prosecutions and is always dangerous.”

Ray said the potential criminal charge that came to mind was perjury, if Justice Department lawyers seeking the FISA warrant were dishonest in making the application to the judge.

“Intentionally misleading a court in a document that is sworn to under oath would be perjury,” Ray said. “But you would have to prove the person knowingly provided false information. Misleading might not be enough.”

Ray said the Justice Department’s Office of Professional Responsibility might look at the matter, to determine whether an official committed an act that requires discipline or dismissal. The matter could be referred to the state bar of any practicing lawyer who is accused of providing misleading information.

“If this matter has the attorney general’s attention, then it is all on the table,” Ray said. “It could examine sending this to the OPR, whether there was commission of a crime, any and all of the above.”

It doesn’t seem likely that the FISA application was misleading, though, said Charles Stimson, a former federal prosecutor and former military judge.

Stimson noted that a page in the FISA application for a warrant explained that the information was based on an opposition research dossier compiled by a former British intelligence agent, Christopher Steele.

Although the application did not say it was paid for by Hillary Clinton’s presidential campaign and the Democratic National Committee, Stimson said, the application letter was clear that the document was opposition research directed against Trump.

“From a pure legal standpoint, it was accurate,” Stimson, now manager of the national security law program at The Heritage Foundation, told The Daily Signal.

“It arguably wasn’t completely forthcoming,” he said. “But the fact is, a federal district court judge had the information and ruled on it and reauthorized surveillance. … There is a gray zone. It didn’t say Hillary Clinton paid for it and that it wasn’t verified.”

However, Stimson noted that a court could require Justice Department lawyers to explain why their lack of information in the application wasn’t a case of trying to defraud the court. He also said a bar complaint could lead to the loss of a law license.

But department lawyers have a reason to be forthcoming with FISA court judges, Stimson added.

“There is an ongoing relationship with the Department of Justice and those lawyers,” Stimson said. “The last thing these lawyers want to do is burn their credibility.”

David Kris, an assistant attorney general during the Obama administration, argues that although special counsel Robert Mueller found no conspiracy between the Trump campaign and Russia to give Trump an edge in the 2016 election, the larger Russia investigation itself—as well as the FISA warrant on Page—was still legitimate.

Kris wrote in the Lawfare blog:

[T]here is the Steele dossier, which was first publicly revealed in January 2017, but was in the FBI’s hands before then. People argue about the extent to which the Steele dossier has held up; the best and most recent assessment that I have seen, here, is that it has held up quite well.

But in any event, the document was properly taken seriously then given Steele’s history as a former British MI-6 officer and reliable informant (as documented in the Carter Page FISA applications). … There was a lot of justifiable investigative activity into the campaign and campaign officials and their relationship with Russia and the Russian government.

However, Stimson contends that Barr has legitimate reasons for wanting to review the matter that go beyond the FISA warrant.

“The attorney general of the United States should want to know how a counterintelligence investigation against a leading presidential candidate began,” Stimson said. “He will want to look at the entire matter. How did it get to the point of a FISA warrant? Maybe it was predicated entirely on the dossier. Maybe there was some there there.”

Just two short years after the end of the Obama administration’s disastrous policies, America is once again thriving due to conservative solutions that have produced a historic surge in economic growth.

The Trump administration has embraced over 60 percent of The Heritage Foundation’s policy recommendations since his inauguration. But with the House now firmly within the grips of the progressive left, the victories may come to a screeching halt.

Why? Because they are determined more than ever to give the government more control over your lives. Restoring your liberty and embracing freedom is the best thing for you and the country.

President Donald Trump needs all of the allies he can find to push through the stone wall he now faces within this divided government. And the best way you can partner with him is by becoming a member of his greatest ally in Washington: The Heritage Foundation.

← China’s Next Naval Target Is The Internet’s Underwater Cables; And, What We Should Do To Address The Issue
Asia Times | Why Extradite The Madrid Embassy Raiders? →