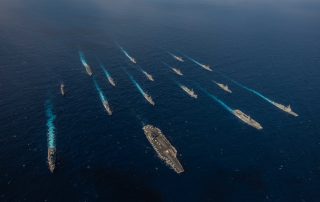 KUALA LUMPUR — The Pentagon will unveil a new Indo-Pacific strategy at the Shangri-La Dialogue this May, Assistant Secretary of Defense for Indo-Pacific Security Affairs Randall Schriver told a media roundtable in Kuala Lumpur, Malaysia, last week.

Acting Secretary of Defense Patrick Shanahan’s speech at the Singapore event will focus on the new Indo-Pacific Strategy Report and articulation of the new U.S. Indo-Pacific strategy, Schriver said.

“Our National Defense Strategy and National Security Strategy identify the Indo-Pacific as the priority theater, and I think Secretary Shanahan will talk about that at Shangri-La and what it means to be a priority theater. And over time you will see that show up in resources and presence, though I’m not in a position to talk on the specifics of that,” he said.

In reply to a USNI News question on the effects of Freedom of Navigation Operations (FONOPs) in the region and their impact in discouraging China’s militarization of its artificial islands, Schriver stated that FONOPs were designed to demonstrate that the United States will continue to fly, sail and operate where law allows.

“There’s not necessarily an expectation that they roll back the land reclamation – what they’ve done on the island-building is done. They’ve changed some facts on the ground. We hope that they will not deploy additional military systems and in fact remove the military systems on these outposts,” he said. The United States disinvited China from the 2018 Rim of the Pacific exercise in response to China militarizing the South China Sea and in direct contradiction to what Chinese President Xi Jinping pledged in 2015 in the Rose Garden of the White House.

Schriver added, “beyond what they’ve done on these outpost, it’s our intent to make sure that no one country can change international law or the status of the South China Sea, so that’s why we conduct the Freedom of Navigation Operations and the other presence operations in the South China Sea.”

He noted that the United States is increasingly joined by other countries in conducting FONOPs and cited the example of the recent French transit of the Taiwan Straits as an example.

“We’re joined by a lot of countries who see the potential erosion of international law as a problem not only in the South China Sea but has broader implications.”

When asked by USNI if the French transit through the Taiwan Straits was done in consultation with the U.S., he replied, “we talked to the French about our respective Indo-Pacific strategies and our respective concerns about the erosion of international law and norms, and I’ll leave it at that.”

In regard to the Maritime Security Initiative, Schriver stated that the U.S. hopes to see its partner nations have the capability to see and sense activities in their territorial waters and exclusive economic zones and ultimately to have partners, if they wished, to share and network with other regional countries to have a broader common operating picture.

“We’re providing the building blocks for that such as maritime surveillance capabilities in some countries. In the cases of some countries that’s maritime patrol aircraft; in other countries that’s coastal radars or [unmanned aerial vehicles] that are equipped for maritime domain awareness. Ultimately it’s not only seeing or sensing, it’s the opportunity to share and contribute to maritime security,” he said. 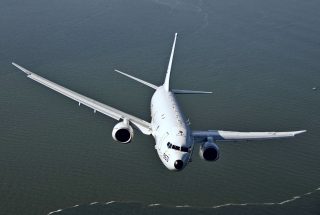 A P-8A Poseidon assigned to Air Test and Evaluation Squadron (VX) 20 flies over the Chesapeake Bay. US Navy Photo

Among the known programs under the Maritime Security Initiative are the U.S-funded provision of ScanEagle 2 Unmanned Air Systems to several nations in the region. The Philippines received six ScanEagle 2 UAS in 2018, while Malaysia will receive six ScanEagle 2 UAS in September 2019. Indonesia will get a similar amount by 2022. Schriver stated there was potential to transfer to partner nations the Navy’s old P-3 Orion maritime surveillance aircraft as the U.S. transitions to the P-8A Poseidon, but those aircraft transfers would depend on individual country requirements.

In regard to U.S. law that restricts arms sales to countries that do business with Russia in defense procurement, Schriver said that the Countering America’s Adversaries Through Sanctions Act (CAATSA) legislation was passed due to congressional concern on Russian actions.

“It’s aimed at Russia, it’s not aimed at our allies and partners, particularly our emerging partners. And we understand that there are legacy relationships; many of our emerging partners have Russian systems, and we understand the need to maintain them. What we are most interested in is how can we be the preferred partner and the partner of choice when it comes to security assistance. We think we match up quite well. Our systems are very good, but our approach to security assistance is open, transparent, corruption-free, scandal-free. Our focus at the Department of Defense is less what our partners shouldn’t be doing but more how we can promote ourselves as a preferred partner, so hopefully we’ll see a trajectory change over time,” he said.

He pointed out that only an actual purchase triggers a review under CAATSA and that the DoD does not give a pre-waiver before a purchase. The legislation, he said, lays the criteria on what could lead the U.S to make a decision to issue a waiver, which he credits former Secretary of Defense James Mattis for ensuring that a waiver process was in the legislation.

“Our greater concern is Russia and their behavior and the need to impose cost on them. Unfortunately, it puts us in a position where we have to have these discussions with emerging partners and explain this is not an impediment to what we are trying to do.”

Schriver was on a stopover in Malaysia after a visit to India, meeting with officials from the Defence and Foreign Ministries and Malaysian Armed Forces officers to discuss Malaysia-U.S cooperation. Malaysia is his only stop in Southeast Asia for this trip, and it is his second visit to Malaysia following last year’s visit on Aug. 14.