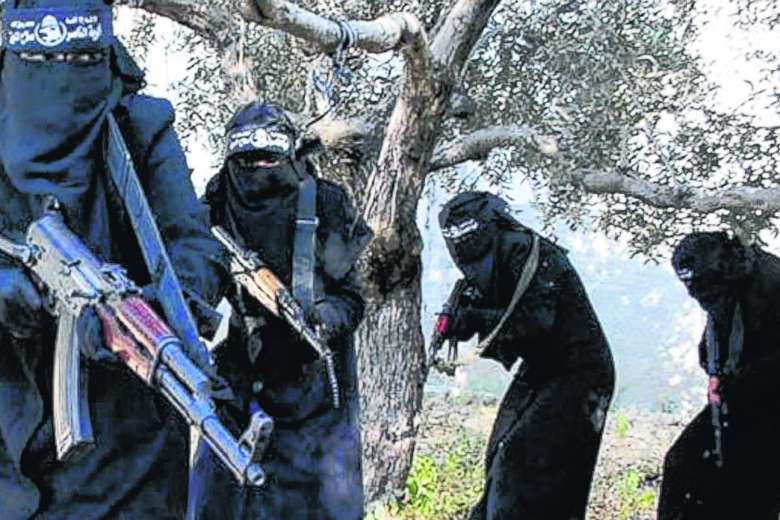 In December, the U.S. announced that it would withdraw its troops from Syria, to which Syrian rebel groups responded by threatening to release thousands of captured Western European and American foreign fighters (FFs) and family members if allies would not take them back.[i] The question of what to do with FFs has become a critical concern for Western European countries. Most of the discussion has focused around male FFs, neglecting the threat posed by women FFs. This is due to prevailing gender norms, which portray women as inherently nonviolent. But these deficient gender paradigms lead officials to overlook the potential dangers of female FFs, resulting in flawed counterrorism policies.

The existence of FFs and transnational insurgents is not a new phenomenon in Europe.[ii] However, the current FF wave differs from previous ones as it is larger, more global, and more diverse in terms of age, gender, and experience in war zones.[iii] The United Nations and the Hague-based International Centre for Counter-Terrorism estimate that 30,000-42,000 FFs (5,718 of whom originate from Western Europe) joined violent non-state groups in the Middle East since 2011.[iv] The number of Western European women who have joined the Islamic State’s caliphate has increased significantly since June 2014, up to 1,000 by July 2018.[v]

With ISIS experiencing significant territorial losses since 2015, there is a large number of FFs at risk of fleeing to neighboring states or returning to their home countries. In response, many Western European nations developed legal frameworks and reintegration programs to criminalize, de-radicalize, and rehabilitate FFs. Yet these governments have struggled to determine which returning FFs pose a security threat. This is especially true in regard to female FFs. Government and media reports reveal a gendered typology and attitude that affects how female FFs are defined and dealt with. Both popular and scholarly literature label women FFs as “jihadi wives” and “followers,” arguing that they play passive and supporting roles within terrorist organizations.[vi] Scholars such as Ester Strømmen note that female FFs are presented as being “misled, lured, and tricked”[vii] into joining ISIS, and are depicted as “delusional, emotionally unstable, and naïve jihadi brides in search of a husband.”[viii] Furthermore, when women are recognized as fighters, their participation is still distinguished from men’s activities; while men are labelled as “soldiers,” “terrorists,” and “combatants,” women are identified as female soldiers, female terrorists, and female combatants.[ix] Female FFs are marginalized due to a difficulty of reconciling their involvement in violent acts with societal stereotypes of women as intrinsically peaceful.[x] Moreover, scholars and reporters vilify women engaged in terrorism with feminized language, such as failed mothers, sexual deviants, and emotionally unstable.[xi]

The overarching narrative on female FFs as jihadi wives both ignores women’s agency and overlooks them as a potential security threat. Female FFs are depicted as merely wives, sisters, and mothers, and their participation in terrorist acts are treated as anomalies.[xii] Yet women play important roles as radicalizers, logisticians, and recruiters.[xiii] For instance, ISIS created an all-female al-Khansaa brigade, a morality police, to ensure women in the caliphate adhere to Islamic norms.[xiv] The hundreds of members of this brigade are trained and armed, and can detain and torture transgressors.[xv]

Though ISIS maintained a ban on female fighters during its early years, the group has employed women on an as-needed basis, regardless of the ideological permissibility.[xvi] ISIS propaganda has featured women in combat capacities. For example, in October 2017, ISIS’s newsletter al-Naba endorsed women in military roles under specific conditions.[xvii] A rise in the number of female suicide bombers among al-Qaeda and ISIS in the past ten years, along with instances of women joining the front lines and handling intelligence functions, shows how women’s roles have evolved within these terrorist groups.[xviii]

Western European governments routinely underestimate the threat posed by female FFs.[xix] These countries have not cracked down nearly as aggressively on female fighters compared to their male counterparts.[xx] The vast majority of women returning from Syria and Iraq have been found guilty of relatively minor offenses, such as financing, organizing, and facilitating terrorism-related acts; consequently, they have generally received lenient punishments, such as the confiscation of their passports.[xxi] In most cases, defense attorneys argued that female FFs were naïve and and not fully aware of their own acts.[xxii]

Current counterterrorism policies in Western Europe overlook the complexity of women’s role in terrorist organizations. Governments continue to largely view female FFs as victims, rather than as threats. This gender bias produces problematic counterterrorism priorities, with female fighters receiving less scrutiny than men due to the institutionalized assumption that women are inherently less dangerous.[xxiii] Ultimately, policymakers underestimate female FFs at their own peril.

[i] Tanya Mehra and Christophe Paulussen, “The Repatriation of Foreign Fighters and their Families: Options, Obligations, Morality, and long-term thinking,” International Centree for Counter-Terrorism – the Hague, March 6, 2019, https://icct.nl/publication/the-repatriation-of-foreign-fighters-and-their-families-options-obligations-morality-and-long-term-thinking/; David Malet, “Is it more dangerous to let ISIS foreign fighters from the West return or prevent them from coming back?” PRI, March 1, 2019, https://www.pri.org/stories/2019-03-01/it-more-dangerous-let-isis-foreign-fighters-west-return-or-prevent-them-coming.

[vi] Alissa J. Rubin, “She Left France to Fight in Syria. Now She Wants to Return. But Can She?” New York Times, January 12, 2018, https://www.nytimes.com/2018/01/11/world/europe/emilie-konig-france-islamic-state.html; Laura Huey and Eric Witmer, “IS_Fangirl: Exploring a New Role for Women in Terrorism,” Journal of Terrorism Research, Volume 7, Issue 1, January 2016.; and Beverley Milton-Edwards and Sumaya Attia, “Female Terrorists and Their Role in Jihadi Groups,” Brookings, May 9, 2017, https://www.brookings.edu/opinions/female-terrorists-and-their-role-in-jihadi-groups/.

[xv] Richard Barrett, “Beyond the Caliphate: Foreign Fighters and the Threat of Returnees,” The Soufan Center, October 2017, https://thesoufancenter.org/wp-content/uploads/2017/11/Beyond-the-Caliphate-Foreign-Fighters-and-the-Threat-of-Returnees-TSC-Report-October-2017-v3.pdf.

[xix] Anne Speckhard, Ardian Shajkovci, and Ahmet Yayla, “Following a Military Defeat of ISIS in Syria and Iraq: What Happens Next after the Military Victory and the Return of Foreign Fighters?” Contemporary Voices: St Andrews Journal of International Relations, 8, No. 1, February 8, 2017: 81–89.