Upgrade to the Sinpo-class sub, which was a copy, variant, or upgrade of the Golf-class Soviet submarine.  Likely capable of getting close enough to Hawaii or Guam to launch a nuclear tipped SLBM from underwater.  This is a big deal.  It expands the threat with a legitimate platform for nuclear weapons that can hit American sovereign territory. 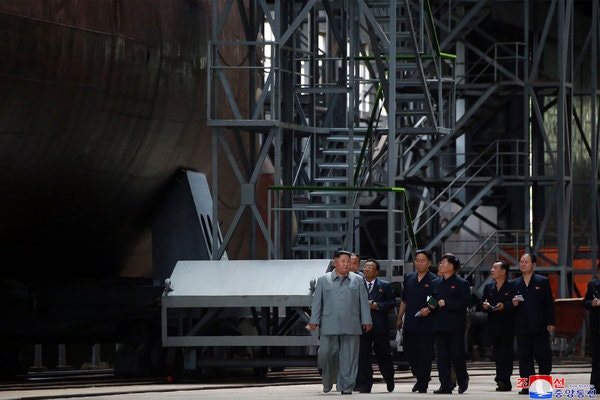 The North’s official Korean Central News Agency said the country planned to deploy the new submarine soon in waters off its east coast.

The report included three photographs of Mr. Kim visiting a shipyard where the submarine was built. The photos showed part of the submarine, but the article revealed no technical details on the submarine. It also did not specify when Mr. Kim made the visit.

North Korea has been known to be building a new submarine in its naval base in Sinpo, on its east coast. It has also tested at least one submarine-launched ballistic missile, known as Pukguksong-1, and is believed to be developing a new and more powerful submarine-launched missile.

On his visit to the shipyard, Mr. Kim was accompanied by top officials responsible for the North’s nuclear, missile and other military procurement programs. Mr. Kim instructed them to strengthen the country’s naval power, including submarines, the North Korean news agency said.

Mr. Kim “expressed great satisfaction over the fact that the submarine was designed and built to be capable of fully implementing the military strategic intention of the party under various circumstances,” the news agency said.

North Korea revealed the news of its new submarine on the same day that John R. Bolton, the White House’s national security adviser, was to arrive in Seoul, the South Korean capital, to discuss North Korea and a festering trade disputebetween South Korea and Japan, both American allies. Mr. Bolton met with Japanese officials in Tokyo on Monday.

President Trump and Mr. Kim met on the border that divides the two Koreas on last month and agreed to resume staff-level talks between the two countries, months after the leaders’ second summit meeting in Hanoi, Vietnam, ended with no agreement on ending the North’s nuclear program. But such lower-level talks have yet to take place.

On Monday, Mr. Trump said his administration had had very positive correspondence recently with North Korea, but that the two sides had yet to set a timetable to restart talks. 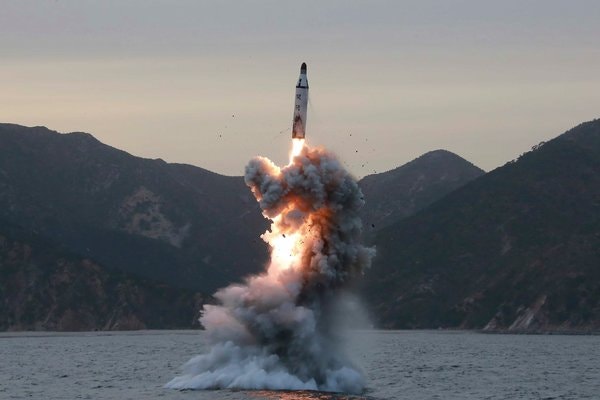 North Korea warned last week that if the United States pressed ahead with joint military exercises with South Korea planned for next month, it could jeopardize future nuclear talks and prompt it to resume nuclear and long-range missile testing, which were last conducted in late 2017.

North Korea said in 2016 that it had successfully tested the Pukguksong-1, its first submarine-launched ballistic missile. The two-stage, solid-fuel missile was designed to be carried on North Korea’s single Sinpo-class submarine. But that submarine only had one missile tube. That left outside military analysts to suspect that North Korea would try to build more such submarines or a new submarine with multiple tubes.

In recent months, South Korean military officials have said North Korea was building a modified version of the Sinpo-class submarine, which it has used for its Pukguksong-1 testing.

In a report posted last month on 38 North, a website dedicated to studying North Korea, Jack Liu and Peter Makowsky, experts on the North Korean military, said the North appeared to be building another Sinpo-class ballistic missile submarine. They based their report on analysis of satellite imagery of the Sinpo naval shipyard.

After its intercontinental ballistic missile test in November 2017, North Korea boasted of an ability to strike the continental United States with nuclear missiles. But the North has no large, stealthy and long-range submarine to carry and launch such long-range missiles.

Nor does it have submarines advanced enough to travel long distances without detection to attack distant targets across the Pacific. Even the new submarine that the North has been building, which has a diesel engine, will not be enough to make a round trip across the Pacific without surfacing and exposing itself for detection, South Korean defense officials said.

Nevertheless, North Korea’s growing submarine and submarine-launched missile programs have alarmed leaders of the region, as they demonstrate the advances the secretive country has made in its efforts to significantly enhance the range and stealth of its missiles.

The North’s submarine-launched Pukguksong-1 has a range of more than 900 miles, South Korean defense officials said. Photos carried in a state-run North Korean newspaper in 2017 indicated that North Korea was developing a new longer-range version known as a Pukguksong-3. A longer-range version of such a missile would give the North considerably more strategic leverage, military experts said.

Some analysts in South Korea said the Pukguksong-3 also appeared to be designed to carry a nuclear warhead.

Until now, North Korea has an outdated fleet of 70 submarines, most of them small vessels unfit for operations beyond coastal waters.