Passing The Paramilitary Torch From The CIA To Special Operations Command

September 2, 2019 · by Support CMShelplive · in Afghanistan, Al Qaeda, CIA, Department Of Defense, military history, national security, Special Operations, Taliban, terrorism · Leave a comment
David Maxwell comment:  “A timely think piece given today’s NY Time article on the CIA in Afghanistan (https://www.nytimes.com/2019/09/02/us/politics/trump-cia-afghanistan.html)  This will be very controversial and I imagine will generate strong pushback from the CIA.  Truth in advertising, Doug was a student in my Unconventional Warfare and Special Operations for Policy Makers and Strategists course at Georgetown.”

Passing the Paramilitary Torch from the CIA to Special Operations Command 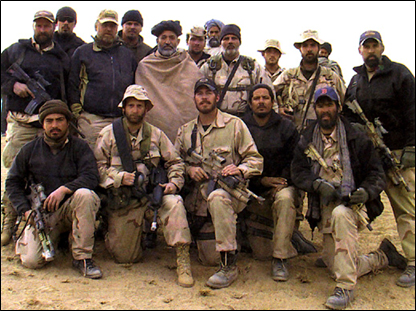 In the shadowy realm of international competition that falls below the threshold of traditional conflict, the United States continues to struggle to match near-peer competitors like Russia and China. The Russian-led paramilitary invasion of eastern Ukraine that began in mid-2014 has thus far prevented successive U.S.-backed Ukrainian governments from fully consolidating power or joining the North Atlantic Treaty Organization. In Syria, Russian private paramilitary companies have been crucial in propping up the regime of Bashar al-Assad. Over the last decade, China has built artificial islands and deployed paramilitary naval units to secure its illegal claim to the international waterways of the South China Sea – all without firing a single shot. These examples involved the use of paramilitary activities by America’s adversaries, a form of conflict to which the U.S. government has historically responded with the CIA. In this context, paramilitary activities involve the use of non-conventional or proxy forces to conduct sabotage, ambushes, or other low-visibility combat operations to undermine and contribute to the defeat of an adversary.

The CIA’s primacy in matters of paramilitary activities is well-established through existing Congressional legislation and presidential executive orders. However, today the United States faces serious threats from near-peer state adversaries, terrorist groups, and other sub-state actors that should lead its leaders to rethink its organizational and operational approaches to paramilitary activities to optimize both its capabilities and capacity to meet these threats. The U.S. Defense Department, specifically its subordinate U.S. Special Operations Command, is the organization best prepared to assume leadership of the U.S. government’s paramilitary efforts that are critical to supporting its national interests.

One of the major recommendations of the 9/11 Commission Report, delivered in 2004, was that the Defense Department should assume primary responsibility for U.S. government paramilitary activities from the CIA. That commission found that the CIA “relied on operatives without the requisite military training,” resulting in unsatisfactory results. Additionally, the report advised that the United States “cannot afford to build two separate capabilities for carrying out secret military operations, secretly operating standoff missiles, and secretly training foreign military or paramilitary forces.” In response, the Defense Department contracted a study that ultimately determined in 2005 that assuming control of paramilitary operations was inadvisable at that time given the Defense Department’s lack of internal capability, discomfort with existing legal strictures on Title 50 authorities, and concern over potentially increased Congressional oversight that would come with responsibility for paramilitary activities. In the twelve years since that study delivered its findings and recommendations, the Defense Department has developed its own clandestine intelligence and operational paramilitary capabilities. It is now the appropriate time to reassess and appropriately re-task the Department of Defense’s own U.S. Special Operations Command with primary responsibility for paramilitary activities. Historically, the CIA has a very poor track record of success in organizing and leading paramilitary campaigns, often relying on military special operations support. Other forms of covert action include propaganda to undermine confidence in or adherence to hostile governments and political action designed to support domestic parties in opposition to U.S. adversaries. Only a small number of the declassified CIA-led paramilitary campaigns between 1948 and 2001 were deemed “successful”, though propaganda and political covert actions fared better. While the bravery of CIA paramilitary operatives should be lauded and honored, the American people must be ensured that their paramilitary capabilities are better organized to best defend their interests in the future.

To many even within the U.S. government, most of U.S. Special Operations Command’s Operational Preparation of the Environment activities are already virtually indistinguishable from the CIA’s paramilitary activities, as they employ many of the same methodologies to establish and manage human and physical infrastructure in semi-permissive and denied areas to support U.S. strategic objectives. Further highlighting this confused perception, the House Permanent Select Committee on Intelligence has previously argued that, “in categorizing its clandestine activities, the Defense Department frequently labels them as ‘Operational Preparation of the Environment’ to distinguish particular operations as traditional military activities and not as intelligence functions. The committee observes, though, that overuse of the term has made the distinction all but meaningless.” Shifting primacy of responsibility for paramilitary activities from the CIA to U.S. Special Operations Command and consolidating it with the existing Operational Preparation of the Environment mission would serve the dual purpose of maximizing the effectiveness of paramilitary capabilities while also potentially addressing the growing tensions related to the oversight disparity between paramilitary and clandestine activities.

Many naysayers of this proposal will argue that only the CIA has the means to safeguard the secrecy of such paramilitary activity and accomplish the mission with discrete U.S. government presence. This argument is less compelling given the CIA’s demonstrably poor track record in keeping U.S. government participation in paramilitary operations discrete, from the “Bay of Pigs” invasion of Cuba in 1961 to the recent paramilitary operation revealed in the Middle East. By comparison, U.S. Special Operations Command already has forces deployed around the world, accomplishing sensitive missions that largely go unnoticed. Additionally, the Defense Department already executes Special Access Programs that are waived and unacknowledged. Much like CIA paramilitary operations conducted under Presidential Findings, waived and unacknowledged Special Access Programs are “considered to be so sensitive that they are exempt from standard reporting requirements to the Congress” and are only briefed to highly-cleared members of the relevant Congressional committees. The Defense Department already has a well-established track record of ensuring the confidentiality of incredibly sensitive programs, requirements with which the CIA has shown some difficulty.

Not surprisingly, the CIA has always relied extensively on Defense Department special operations forces to support its paramilitary activities ever since the National Security Act of 1947 first created the CIA. Every paramilitary operation from Tibet (1953-1972) to the modern era saw large numbers of the Defense Department special operations service members employed by the CIA using its authorities to execute the mission. While the CIA’s actual end strength of paramilitary skills officers is classified, most open-source estimates place its numbers at no more than a couple hundred exemplary Americans whose attentions are split between overseas assignments and headquarters duty at Langley. By comparison, U.S. Special Operations Command has nearly 70,000 total personnel assigned, of which the command already has 13,000 deployed around the world at any given time. As previously discussed, the Office of Special Warfare coordinates the unconventional warfare capabilities of five battalions’ (over 2,000 soldiers) worth of the U.S.’s finest practitioners of the paramilitary arts in support of every geographic combatant command (Africa, Europe, Central and South America, North America, Middle East, and Pacific). These numbers do not account for the tens of thousands of special operations members in other units trained in unconventional warfare. By outright assuming responsibility for all U.S. paramilitary operations, U.S. Special Operations Command will be able to leverage its full capacity to conduct the preparatory undertakings for and execution of successful paramilitary activities, thereby increasing options for U.S. policymakers.  Clearly, U.S. Special Operations Command now has a much greater capacity to fulfill current and future paramilitary requirements that will only continue to grow in scale.

Next, the appropriations committees should explore additional funding lines to allow U.S. Special Operations Command to assume its new paramilitary activities leadership role and draft required legislative language into the next NDAA. An amendment to Section 1202 of the FY18 NDAA, which authorized funding for “the irregular warfare tools and resources required to impede the progress of near peer advances in the competitive space short of war”, would provide a good starting point from which to expand U.S. Special Operations Command’s paramilitary capabilities. Unfortunately, this line of effort was only funded for $10 million dollars in the FY18 NDAA, far beneath the amount needed given the scale of the challenge posed by these competitors. A considerable increase in funding under Section 1202 would enable U.S. Special Operations Command personnel, who are already on the front lines alongside our international allies and partners in the “shadow war” against China, Russia, and Iran, to better counter these competitors’ destabilizing activities in the South China Sea, Eastern Europe, and the Middle East.

The American people deserve the most effective, efficient, and robust paramilitary capabilities that the nation can muster, and the U.S. government should compel the CIA and Defense Department to execute this recommended restructuring. Close collaboration, coordination, and synchronization of efforts will reinforce the importance of interagency integration and demonstrate the wisdom of this undertaking. This logical effort will, ultimately, better enable the U.S. government to fulfill its most sacred duty to the American people – protecting their vital national interests and way of life from those adversaries and competitors who would endeavor to do them harm.

Doug Livermore works as a contracted government advisor in the Office of the Secretary of Defense, while also serving as a Special Forces officer in the U.S. Army National Guard. In addition to multiple combat deployments to both Iraq and Afghanistan, Doug led special operations elements during contingency operations around the world. He holds a master’s degree from Georgetown University’s Security Studies Program and a bachelor’s degree from the U.S. Military Academy at West Point. The views expressed in his articles are those of the author and do not reflect the official policy or position of the Department of Defense or the U.S. government.