Hollowed-Out Pentagon Begins To Staff Up

Hollowed-Out Pentagon Begins to Staff Up 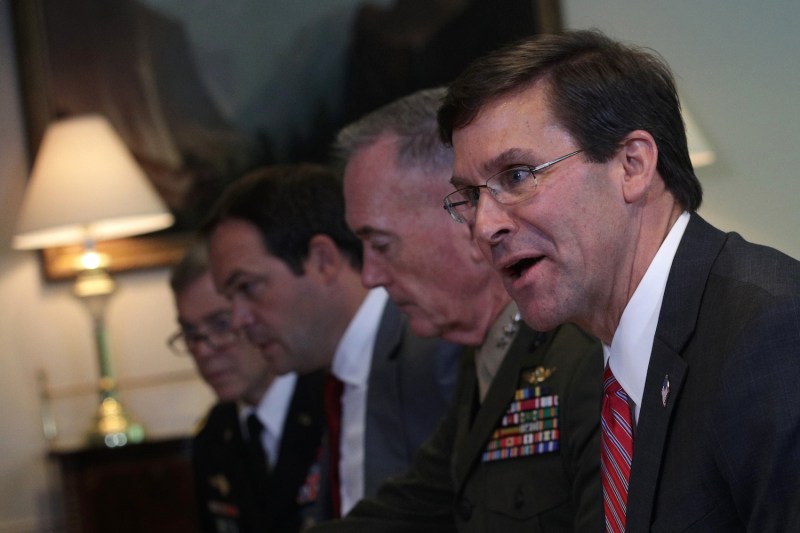 After more than seven months without a confirmed leader, the Pentagon is slowly but surely beginning to rebuild its senior ranks under new Defense Secretary Mark Esper, but persistent gaps in staffing at lower levels of the department could continue to hamper policymaking.

In July, 19 of the most senior Pentagon roles, including the top three positions, were vacant or filled by temporary officials. As of Sept. 5, officials confirm to Foreign Policy that the number of vacant Senate-confirmed positions is down to 14, and Esper is pushing to close the remaining gap in the next few months.

The progress on key nominations will go a long way toward rebuilding morale at the Office of the Secretary of Defense (OSD), the Pentagon’s civilian arm, where officials have long felt their influence eroding. Current and former officials, as well as outside observers, have expressed concern that the shallow bench at the OSD, particularly at the deputy level, is undermining civilian oversight of the military, a legal requirement that dates back to the United States’ earliest days, when the Founding Fathers wrote it into the Constitution.

“Since [he came] in as secretary of defense I think we’ve seen a lot of energy and enthusiasm by Mark Esper to try to really sink his teeth into the position,” said Mara Karlin, a nonresident senior fellow at the Brookings Institution and a former Pentagon official. “He is showing a willingness to start taking on some really difficult problems. Perhaps the most difficult, though, will be the personnel challenges.”

The nominees for Air Force secretary, Army secretary, and the chief management officer are expected to have their confirmation hearings in the coming weeks, a senior defense official told Foreign Policy. In addition, the Pentagon expects to soon nominate Elaine McCusker, who is currently serving as the acting comptroller, for the permanent job, the official said. Once the current budget planning cycle is complete, the department will also nominate John Whitley, who is currently serving as the acting director of cost assessment and program evaluation, to the permanent position.

In total, Esper expects five nominees will have their confirmation hearings in the next few weeks, and another eight are currently undergoing White House vetting, he told reporters in an Aug. 28 press briefing. The only empty Senate-confirmed post that is not yet in the process of being filled is Whitley’s position, according to the official.

“Secretary Esper has sent a very clear signal that openings need to be filled,” the official said.

The Pentagon has also hired a new White House liaison, Ben Schramm, according to the official. Schramm, who started the new job in August, replaces James O’Beirne, who held the position for two years.

Esper’s confirmation, as well as the arrival of a new chairman of the joint chiefs, Gen. Mark Milley, this fall, is a chance to right the ship, said Jim Townsend, another former Pentagon official.

“There is an opportunity now with a new secretary and a new chairman to try to rebalance things,” Townsend said, noting that Esper himself worked on OSD policy as a deputy assistant secretary of defense (DASD) during the George W. Bush administration. “He knows the role and the importance of staffing OSD policy, and that’s a big difference.”

But at the department’s lower levels, continuing turnover has left significant gaps. Colin Jackson, the DASD for Afghanistan and Pakistan, departed in July, a Pentagon spokesperson confirmed. No successor has been named, even as U.S. diplomats appear to be on the verge of a historic peace deal with the Taliban to begin withdrawing thousands of troops from Afghanistan. Jackson did not respond to a request for comment.

Meanwhile, Michael Mulroy, DASD for the Middle East, also plans to leave the department on Dec. 1, a defense official confirmed. Mulroy, who spent most of his career as a CIA paramilitary operations officer in conflict zones, always planned to stay for two years and then move back to Montana to work on the consulting group he co-founded, the Lobo Institute.

Mulroy took the job in 2017 because then Defense Secretary James Mattis was looking for “nonpartisan and apolitical individuals” who spent time in conflict areas to fill his office, he has said.

These departures are just the latest from an OSD policy shop that has seen a significant amount of turnover over the past year. Most recently, the No. 2 official, John Trachtenberg, whose official title was deputy under secretary of defense for policy, departed his post.

None of those positions have been filled permanently. Overall at the OSD’s policy department, three out of five positions for assistant secretary of defense are currently filled on a temporary basis.

Townsend and other observers are concerned about the lack of manpower at the DASD level in particular, where policy deputies are responsible for the blocking-and-tackling work of policy initiatives.

“They need lieutenants down there to help push policy initiatives,” Townsend said. Without DASDs, “the deck is stacked against Esper and his crew.”

But experts worry that the Pentagon will have trouble filling these positions, particularly as the end of the president’s term approaches. Without the guarantee of a job after the election, many officials who might otherwise consider taking a DASD job might hold off.

Townsend noted that taking a DASD position is not the most attractive option for experts in the field in the best of times. Generally taking such a job requires divesting stocks, taking a pay cut, and committing to grueling hours and time away from family for at least two years.

“When you get later and later in an administration … you are getting slim pickings,” Karlin noted.

Here is the full list of Senate-confirmed DoD positions that are vacant or filled by a temporary official:

Under secretary of defense for personnel and readiness

Deputy under secretary of defense for personnel and readiness

Inspector general of the DoD

Assistant secretary of defense for manpower and reserve affairs

Assistant secretary of defense for special operations and low-intensity conflict

Assistant secretary of the Navy for energy, installations, and environment

General counsel of the Department of the Navy