Spokesman says Tehran has ability to go beyond 20% enrichment of uranium, which analysts say is short technical step away from weapons-grade; UN inspectors to monitor program

By Nasser Karimi and Jon GambrellToday, 10:19 am 3
The Times Of Israel 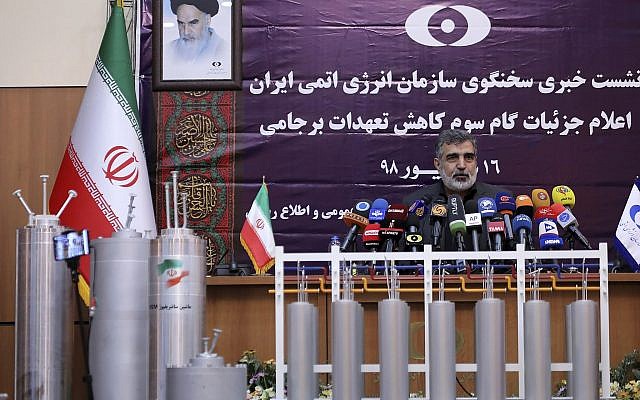 Behrouz Kamalvandi of the Atomic Energy Organization of Iran made the remarks in a news conference carried on live television. He spoke from a podium with advanced centrifuges standing next to him.

Iran already has breached the stockpile and enrichment level limits set by the deal, while stressing it could quickly revert back to the terms of the accord, if Europe delivers the sanctions relief promised in return for curbing Tehran’s nuclear program.

Kamalvandi warned that Europe had little time left to save the deal. US President Donald Trump withdrew America from the accord over a year ago before imposing crippling trade sanctions on Iran. 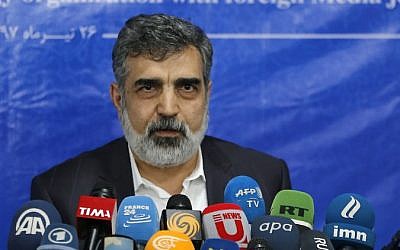 “As far as the other side does not implement their commitments, they should not expect Iran to fulfill its commitments,” Kamalvandi said.

Kamalvandi said Iran had the ability to go beyond 20 percent enrichment of uranium. Analysts say 20% is just a short technical step away from 90% enrichment, which is weapons-grade level.

Kamalvandi warned several times in his comments that Iran was rapidly approaching a point that would mean a full withdrawal from the deal.

“Our stockpile is quickly increasing; we hope they will come to their senses,” he said. 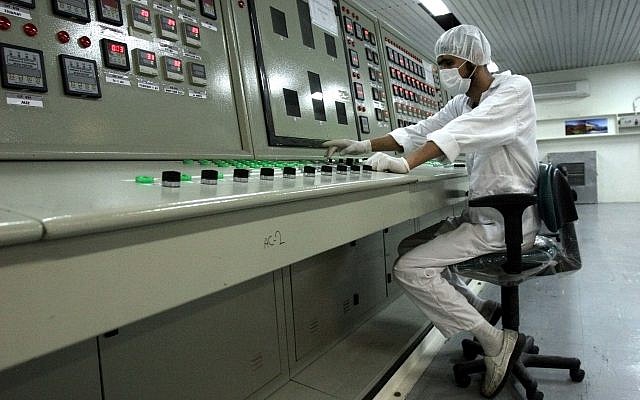 A technician at the Uranium Conversion Facility just outside the city of Isfahan, Iran, 255 miles (410 kilometers) south of the capital Tehran, February 3, 2007. (AP/Vahid Salemi/File)

However, he stressed that Iran would allow UN inspectors to continue to monitor sites in the country. A top official from the UN’s International Atomic Energy Agency was expected to meet with Iranian officials in Tehran on Sunday. 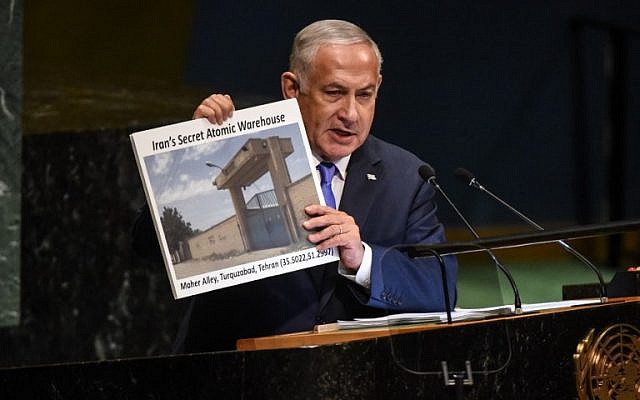 Iran denies that it seeks nuclear weapons. Israel’s Prime Minister Benjamin Netanyahu, who opposed the 2015 deal, insists that Tehran is seeking a nuclear arsenal, and is hiding parts of its program. A New York Times report this week quoted Netanyahu saying he came very close to striking Iran in 2012 to try to halt its rogue nuclear program. The same report said Israel was now again considering a strike on Iran.

Tensions between Iran and the US have risen in recent months that have seen mysterious attacks on oil tankers near the Strait of Hormuz, Iran shooting down a US military surveillance drone and other incidents across the wider Middle East.

Also on Saturday, satellite images showed that a once-detained Iranian oil tanker pursued by the US appears to be off the coast of Syria, where Tehran reportedly promised the vessel would not go when authorities in Gibraltar agreed to release it several weeks ago. 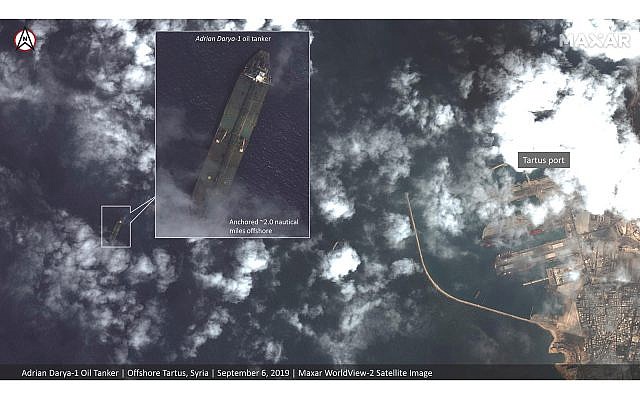 The tanker Adrian Darya-1, formerly known as the Grace-1, turned off its Automatic Identification System late Monday, leading to speculation it would be heading to Syria. Other Iranian oil tankers have similarly turned off their tracking beacons in the area, with analysts saying they believe crude oil ends up in Syria in support of embattled President Bashar Assad’s government.

Images obtained by The Associated Press early Saturday from Maxar Technologies appeared to show the vessel off Syria’s coast, some 2 nautical miles (3.7 kilometers) off shore under intermittent cloud cover.

Iranian and Syrian officials have not acknowledged the vessel’s presence there. There was no immediate report in Iranian state media about the ship, though authorities earlier said the 2.1 million barrels of crude oil onboard had been sold to an unnamed buyer.

The oil on board would be worth about $130 million on the global market, but it remains unclear who would buy the oil as they’d face the threat of US sanctions. 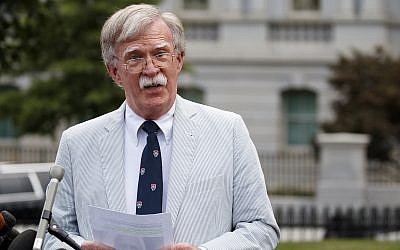 “Anyone who said the Adrian Darya-1 wasn’t headed to #Syria is in denial,” Bolton tweeted. “We can talk, but #Iran’s not getting any sanctions relief until it stops lying and spreading terror!”

US prosecutors in federal court allege the Adrian Darya’s owner is Iran’s Revolutionary Guard, which answers only to Supreme Leader Ayatollah Ali Khamenei. On Wednesday, the US imposed new sanctions on an oil shipping network it alleged had ties to the Guard and offered up to $15 million for anyone with information that disrupts its paramilitary operations.

Brian Hook, the US special envoy for Iran, also has reportedly emailed or texted captains of Iranian oil tankers, trying to scare them into not delivering their cargo.

Meanwhile, the US Transportation Department’s Maritime Administration issued on Saturday a new warning to shippers about a potential threat off the coast of Yemen in the southern Red Sea.

“A maritime threat has been reported in the Red Sea in the vicinity of Yemen,” the warning read. “The nature of the event is potential increased hostilities that threaten maritime security.”

Large areas of war-torn Yemen are held by the country’s Houthi rebels, which are allied to Iran. Shipping in the Red Sea has been targeted previously by rebel attacks. On Wednesday, a warning went out after two small boats followed one ship in the region, but there’s been no other information about a new threat there.

Cmdr. Joshua Frey, a spokesman for the US Navy’s Bahrain-based 5th Fleet, said the Navy remained ready to maintain the safety of shippers in the region. He declined to specifically discuss the warning. The US military’s Central Command did not respond to a request for comment.