In order to scope out the Army’s use of virtual reality training, my editor sent me on a mission to find out if the new tech is the real deal or just fun and games.

The area of operations was the Association of the U.S. Army’s annual conference in Washington, D.C., a “target-rich environment” for a humble defense reporter like me to get my hands on the defense industry’s latest and greatest technology.

My first taste of virtual soldier life wasn’t terribly exciting. I was supposed to embark on a simulated combat assault with the Army Special Forces, but some unexpected tech issues meant I had to “hurry up and wait” for something else. I’ve been told dozens of times by actual troops that flexibility is key, so my photographer, Graeme Jennings, and I mirrored Army values by adapting, improvising, and overcoming our situation.

With some assistance from the Army Special Forces, we reconnoitered a VR shoot-house, complete with a mock M4 rifle, developed by Booz Allen Hamilton’s Digital Soldier program. I was excited to try it out, but was skeptical that one of the world’s largest consulting firms had developed a realistic shooting simulation. 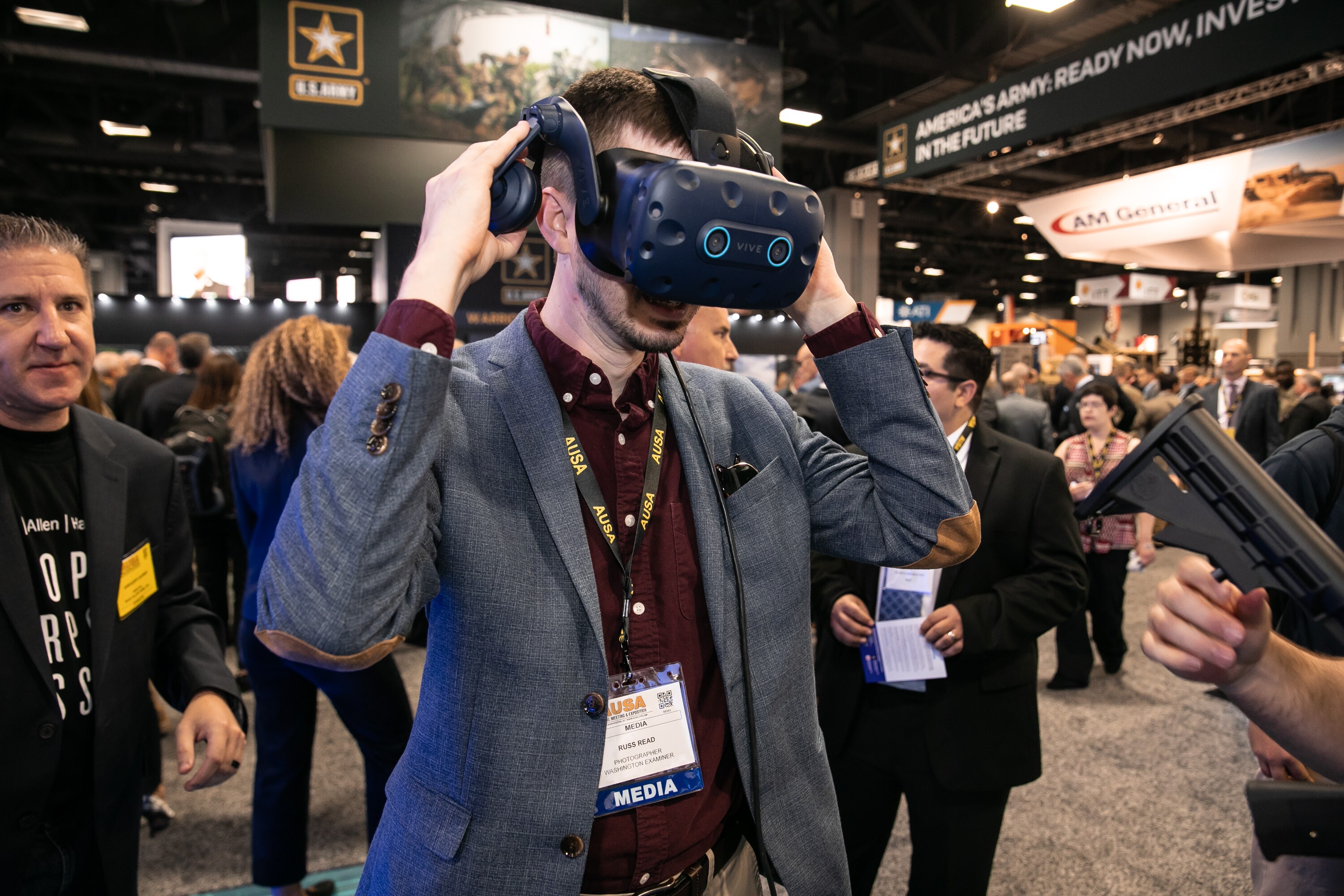 Washington Examiner reporter Russ Read uses a virtual reality interface, at the annual AUSA meeting in Washington. D.C., Tuesday, October 15, 2019. The technology is made by Booz Allen Hamilton, which is used as a virtual training tool for the military.
Graeme Jennings/Graeme Jennings

Putting on the VR headset I immediately was transported to a shooting range with a dusty, desert motif. A program engineer handed me my rifle, which looks and feels like a real M4 with a rail system for accessories, a red dot sight, and a magazine. The rifle is a combination of form and function. An electro-magnetic system replaces the firing mechanism to give the M4 realistic recoil, while a selector switch gives the option between safe, semi-automatic, and automatic fire. The magazine is actually a battery pack that serves as the virtual “ammo,” which must be loaded and unloaded like a real rifle.

Having never served in the military nor used a VR headset, I came into the experience with low expectations. Shouldering the rifle, I started picking off the armed dummies one-by-one, albeit with mixed results. Everything was simulated to mirror the real thing; recoil, physics, and bullet ricochet were were spot on. 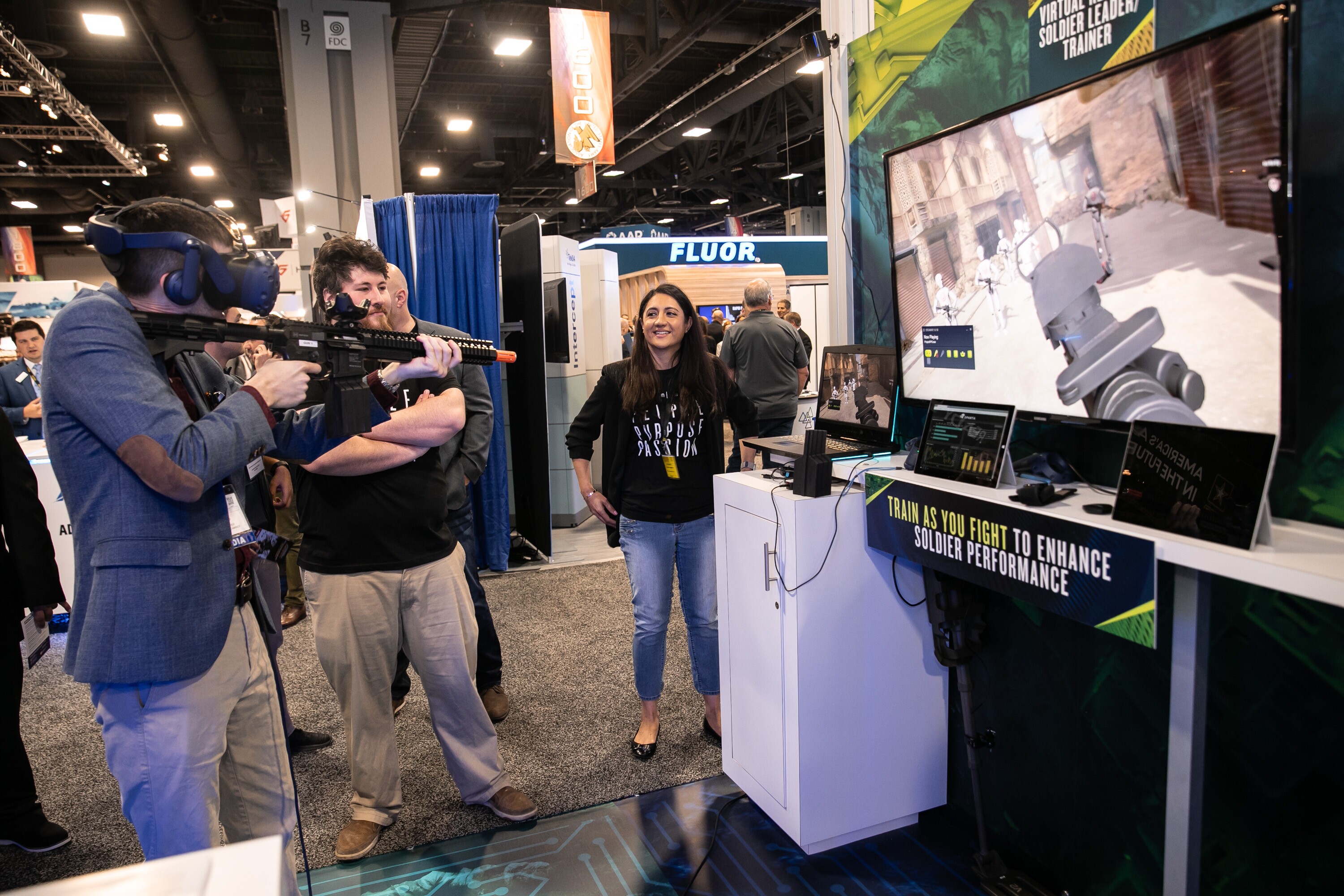 Washington Examiner reporter Russ Read uses a virtual reality interface, at the annual AUSA meeting in Washington. D.C., Tuesday, October 15, 2019. The technology is made by Booz Allen Hamilton, which is used as a virtual training tool for the military.
Graeme Jennings/Graeme Jennings

The experience wasn’t perfect. The red dot sight didn’t operate like the real thing — you had to line up the red dot with the front sight to shoot accurately. Also, I couldn’t go full-auto with the rifle during the simulation itself — kind of a bummer. Additionally, reloading the magazine was an awkward, clunky experience.

The simulator was fun. Lots of folks lined up at the booth to try it out. As a training exercise, though, it’s got its limitations. The mannequins don’t shoot back, so shooting from cover like you would in a combat situation isn’t required. It’s also a solo experience with no chatter or background noise you might expect on an active firing range. Still, it’s definitely more interesting than watching one of the military’s notorious PowerPoint presentations.

Other virtual shoot houses at AUSA took virtual warfare to the next level. The Korean-based Optimus System placed would-be trainees in urban combat, where the enemy fired back. Hits were recorded via sensors on the trainees’ helmets. Four-star Gen. Robert Abrams, who commands U.S. Forces Korea, donned the VR helmet, and shot well. So, too, did a pair of Columbian Army colonels, who afterwards mopped their brows and said, “It’s very realistic.”

Some users can be overwhelmed by the hyper-real experience, said an Israeli artist who is studying VR shoot-houses. “It disorients some people,” the artist told the Washington Examiner.

But the Army is convinced these kinds of VR technologies are the future, and is putting them to use.

As for me, I will return to my comfortable existence as a weekend shooter, taking aim at clay pigeons and paper targets. And will call this, “mission accomplished.”