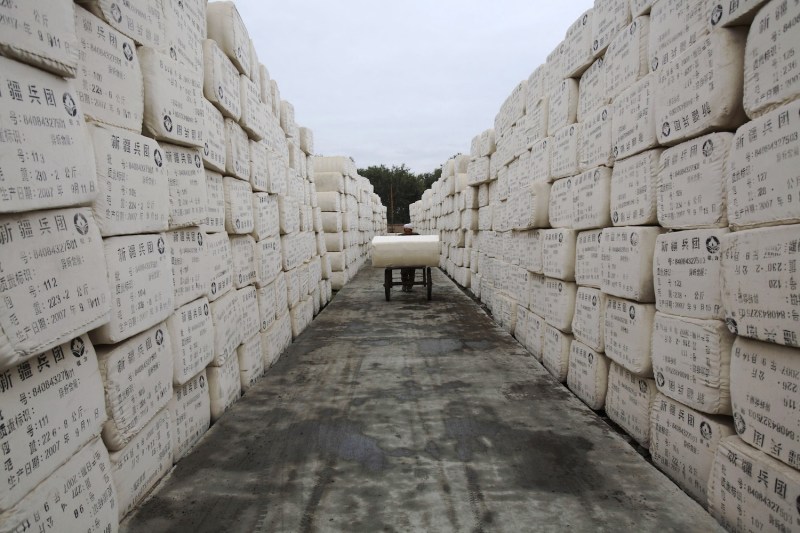 “Employment: Yarkant County satellite factory [for] persons in detention or reeducation.” The spreadsheet, obtained from a cache of local government files, lists the employment status of nearly 2,000 Uighurs—but the 148 entries that carry this particular designation stand out like a sore thumb.

Since spring 2017, the Chinese government has placed vast numbers of Turkic minorities into internment camps, which it refers to as “reeducation camps,” in the northwestern Xinjiang region. This March, it claimed that these supposed students would gradually be released into work placements. Data such as this supports this claim, but not in the way that the government is trying to sell it. Rather, it is part of a rapidly growing set of evidence for how Beijing’s long-term strategy to subdue its northwestern minorities is predicated upon a perverse and intrusive combination of coercive labor, intergenerational separation, and complete social control.

In Xinjiang, state-mandated poverty alleviation goes along with different forms of involuntary labor placements. Under the banner of “industry-driven poverty alleviation,” minorities are being torn away from their own jobs and families. Just as brainwashing is masked as “job training,” forced labor is concealed behind the euphemistic facade of “poverty alleviation.”

The irony of placing interned Uighurs into labor-intensive sweatshops is that many of them were extremely skilled businesspeople, intellectuals, or scientists. Several years ago, flourishing Uighur businesses abroad were severely impacted by seizures of passports, and Uighurs have been progressively forced out of eastern Chinese labor markets. While there are many Uighurs living marginal economic existences, this group are not people who need unskilled labor jobs paid at around 85 cents per hour.

But for Beijing, the real aim is not to improve Uighurs’ lives. It is to achieve so-called social stability in its most extreme form imaginable: the state controlling the educational, work, and care placement of every family member, however old they are.

The first layer of the scheme is the most blatantly coercive. Under the label “vocational education and training plus,” the region is wooing mainland enterprises to train and employ internment camp detainees. Participating companies receive 1,800 RMB per camp detainee they train, and a further 5,000 RMB for each detainee they employ.

Perhaps unaware that this scheme constitutes a major violation of both Chinese and international law, Xinjiang’s regional government website openly admits that this post-internment labor scheme “has attracted a large number of coastal enterprises from the mainland to invest and build factories, which has powerfully expanded employment and promoted increased incomes.”

The spreadsheet from Xinjiang’s Yarkant County tells a very different story: one of shameless exploitation. Of the 148 satellite factory workers who had previously been interned, 43 had their monthly wages listed. Of these, two-thirds only earned 800 RMB per month, about $100, and the average stated wage was 1,228 RMB (about $175) a month—around the level of minimum wage in the region. The oldest person was 74 years old, and nearly half were 40 years or older. Rather than giving young people a strong start into a profitable career, Xinjiang’s internment campaign is tearing middle-aged income earners and even retirees away from their families. The government’s own reports reveal that this practice is causing families to fall below the poverty line.

But the region’s coercive labor scheme is far more encompassing than the internment drive. Hundreds of thousands of so-called rural surplus laborers are also receiving what is termed “centralized” job training in closed facilities. Two thirds of this supposed training typically consists of military drills and political indoctrination. The main difference between this training scheme and the internment camps is that its duration is shorter and fixed. Both are equally involuntary: Minority regions are assigned annual quotas for the numbers of trained surplus laborers that they must produce.

Finally, Xinjiang is setting up so-called satellite factories in every other village in order to literally put every able-bodied adult to work. One propaganda account speaks of a mother of three small children, the youngest only 13 months old. The father works full time outside the village. Since these factories are equipped with nurseries that even care for infants, the mother is now also laboring full time. The goal of all this is not primarily economic. The combination of full-time work and centralized elder care and child care is to ensure family members spend more time in state-controlled settings than with each other, under constant surveillance and control. It’s important to note that it has become effectively impossible for the vast majority of Uighurs to leave Xinjiang and participate in the Chinese labor force elsewhere out of their own initiative; even the appearance of a new Uighur face in a non-Xinjiang city can spark a police investigation.

These schemes operate on a continuum of coercion, and they are becoming heavily intertwined. Collaborations between enterprises, industrial parks, and different types of training institutions—both real vocational schools and vocational internment camps—ensure that former camp detainees end up working alongside other trainees. Differentiating forced internment camp labor from other forms of coercive labor is becoming an impossible task.

The world may not be able to stop the internment, but it must at the very least prevent this oppression from turning into a profitable business scheme. This, however, will require some fundamental rethinking.

The classic method for combating forced labor relies on careful audits of global supply chains. In Xinjiang, this approach runs into a severe limitation: Conducting such audits in the world’s most sophisticated digital police state is impossible. Staff who fail to provide approved answers may face internment. When officials found out that a Uighur worker at Huafu Fashion Co., whose Xinjiang operation is billed as the world’s largest mixed-color cotton yarn mill, had spoken to a Wall Street Journal reporter about her recruitment, they took her to a room in an adjacent restaurant. Afterward, the worker, who had previously been subjected to a government deextremification program, said: “They say it’s secret. Even speaking of it is not allowed.”

Beijing spares neither effort nor money in creating Potemkin schemes for gullible outsiders. According to witnesses, the government paid money to Uighur Muslims to pray in front of foreign visitors in order to showcase religious freedom. It staged elaborate movielike street scenes where Uighurs were forced to play “civilian[s] walking down the street” and had to memorize 50 responses to possible questions.

The Better Cotton Initiative, the world’s largest cotton standard, which aims to promote sustainability and better working conditions, recently stated that “a continued presence and engagement in [Xinjiang] … would continue to benefit local farmers.” Similarly, Volkswagen, which operates a car plant in the region’s capital, defended its presence there as benefiting the Uighur minorities. In other cases, this might be a workable approach. Seeking to retain a presence in challenging political environments can be a laudable strategy, assuming that crucial preconditions are met.

Yet present-day Xinjiang is unlike almost any other challenging political environment on the planet, and the balance of power is all in favor of the state. Whatever good might come from the Better Cotton Initiative or Volkswagen staying in Xinjiang is far outweighed by how their presence is exploited. In the case of Volkswagen, the company has not only failed to condemn the region’s atrocities; a media investigation found that it cooperates with the local People’s Armed Police forces.

The Better Cotton Initiative’s continued involvement means that Chinese companies that benefit from Xinjiang’s labor policies and related subsidies can continue to operate under the initiative’s label. Reaping the benefits of oppression while posing as an ethical supplier both emboldens Beijing’s approach and justifies it to its domestic constituencies.

The cotton organization is well aware of such critiques, but prefers to place the burden of proof on others. It states that there is “no direct evidence that…forced labor is being used on BCI licensed farms in Xinjiang.” After Huafu, which is not only a Better Cotton Initiative partner but sits on its council, came under scrutiny, the initiative responded by noting that Huafu had “commissioned an independent social compliance audit … [which] did not identify any instances of forced labour.” Asking for an “independent social compliance audit” in an environment as controlled as Xinjiang is like asking the fox to check that no hens are missing.

My own research on Huafu comes to far more troubling conclusions. Over 90 percent of its staff are ethnic minorities, mostly “rural surplus laborers.” Huafu’s website states that “a large number of rural surplus laborers are idle at home, which … brings hidden dangers to public security.” Company reports depict hundreds of Uighurs in military uniforms at a staff training event, and a Xinjiang government website reports that Huafu is part of an official training initiative that subjects Uighurs to centralized “military drill, thought transformation … and deextremification.” Once employed, staff are subjected to intensive ongoing political indoctrination, including oath-swearing sessions and mandatory written reports designed to “establish correct values.” State propaganda reports note that entire families live in company dormitories; while the parents work, their children attend the Huafu preschool. Such close collaboration with the state’s sociopolitical goals pays handsome dividends. In 2018 alone, the company received over half a billion RMB, about $70 million, in government subsidies for training and employing minorities.

Similarly, the German company Adidas audited Huafu’s spinning facilities in Aksu and found “no evidence of forced labour, or of government involvement in the hiring of their workforce.” However, a cursory search shows Chinese media outlets citing Peng Xianxiang, Huafu’s staff training and development manager, as openly saying that “the local government sends us workers according to [our] company’s staffing needs.” A report from the Aksu government propaganda bureau confirms that the prefecture trains and then sends Uighur workers to Huafu. Government reports indicate that in that very region, as many as 200 adults from a single village were rounded up by government work teams and “shipped off” to work at textile or other factories.

Is Huafu involved in forced labor? At the very least, it is heavily implicated in a wider scheme of involuntary servitude, which constitutes a form of human trafficking. But the wider point is that traditional approaches of identifying specific instances of forced labor do not work for Xinjiang. In the vast majority of cases, such evidence will never be directly available. The ongoing intertwining of different forms of involuntary training and labor, and the level of control the Communist Party exerts over companies, renders such fact-finding missions even more futile. The only viable solution is to consider the entire region to be thoroughly tainted with different forms of coercive labor. This means that nothing made in whole or in part with products from Xinjiang should have any place in an ethically clean supply chain.

This reality forces a fundamental rethink about business involvement in the region. When South Africa’s apartheid regime was in full swing, the West did not simply continue its involvement in order to somehow improve this thoroughly oppressive context. Rather, it responded with divestment and sanctions. This not only drastically reduced the profits derived from oppression but ultimately helped lead to the end of apartheid.

In contrast, companies such as Muji and Uniqlo openly flaunt “Xinjiang cotton” in their product lines, while companies such as H&M continue to procure yarn from Huafu as long as it does not come from Xinjiang. H&M presumably does not know that 19 provinces and cities in eastern China are mutually paired with minority regions in Xinjiang, and that this involves extensive, state-mandated labor transfers. Government reports state that one county in Xinjiang alone sent 103 rural minority surplus laborers to Huafu’s factory in Anhui province.

Xinjiang is a human rights crisis of global dimensions. Firms have a choice: Be complicit in it, or take a stance. Even if they are not morally motivated to act, they should start thinking about the reputational costs that come with participation in atrocity.

← Turkey’s Erdogan Threatens To Close 2 U.S. Military Bases
Can Russia And The U.S. Agree To Keep A Lid On Their Nuclear Arsenals? →