Facing Up To China’s Military Interests In The Arctic

Facing Up to China’s Military Interests in the Arctic 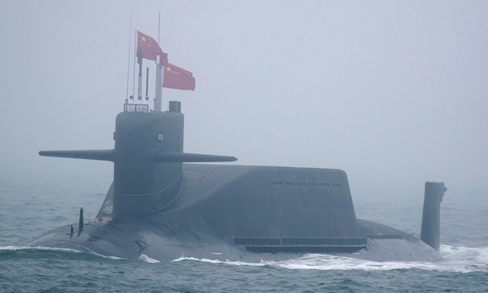 From a nuclear security point of view, the Arctic is China’s vulnerable northern flank. The flight path of U.S. and Russian intercontinental ballistic missiles (ICBMs) targeted at China transit the Arctic. [1] Key components of the U.S. missile defense system are also located in the Arctic.

Chinese submarine-based ballistic missile submarines (SSBNs) operating in the Arctic could restore China’s nuclear deterrence capability (Huanqiu Ribao, October 28, 2013). China currently operates six nuclear-powered attack submarines, four nuclear-powered ballistic missile submarines, and fifty diesel attack submarines, with more under construction. If Chinese nuclear-armed submarines were able to access the Arctic basin undetected, this would be a game-changer for the United States, the NATO states and their partners, and the wider Asia-Pacific (Huanqiu Ribao, April 11, 2012). China would be able to target missiles at the United States and Europe with ease; such ability would strengthen China’s military dominance in Asia and bolster China’s emerging position as a global military power. [2]

Mao Zedong set the goal of getting a Chinese submarine into the Arctic as early as 1959, when the USS Skate surfaced above the Arctic ice and launched the era of continuous nuclear deterrence at sea. The Arctic environment makes antisubmarine warfare challenging: the ambient noise of the Arctic pack ice renders acoustic listening devices less effective, while the opaqueness of the ice defies visual monitoring methods. Mao Zedong asked the Soviet Union to share nuclear submarine technology with China, but Khrushchev declined the request, saying China was protected by Soviet submarines. Mao Zedong is reputed to have declared that China would develop its own nuclear submarines, “Even if it takes ten thousand years!” (Xinhua, July 16, 2009).

China threw its scarce resources at the nuclear submarine project throughout the 1960s, launching its first rudimentary nuclear submarine in 1974. In 1981, China’s then-Minister of Defense Geng Biao authorized a budget of RMB10 billion to build six nuclear submarines—what became China’s Xia-class submarines—with the specific goal of combatting U.S. maritime power. The following year, Geng’s decision was severely criticized as the submarines would be defunct even before they were launched, as “they cannot cruise underwater in the Arctic Ocean without being detected by the other side. Thus, these submarines cannot serve as a deterrent force against any of the powerful nations.” [3] Geng Biao lost his position soon after these comments were made public.

Xi Jinping, the current President of China and Party Secretary of the Chinese Communist Party (CCP), was personal secretary to Geng Biao from 1979-1982. He will be acutely aware of the strategic importance of both the Arctic sea route and the Arctic nuclear missile route to China’s security. Moreover, because of  People’s Liberation Army (PLA) involvement in setting up China’s first Antarctic base during the same time period, Xi will also have long been more conscious than most senior CCP leaders about the strategic importance of Antarctica for China. [4]

In the early 1980s, Minister Geng’s investment in redundant technology was a costly mistake, and one which China could not afford to fix at the time. But China’s rapid economic growth and technological progress over the last two decades have changed that situation. China has steadily expanded its submarine capabilities. In 2013, China demonstrated the capacity to take its nuclear-armed submarines beyond China’s near seas and into the Indian Ocean. China’s nuclear submarines can now launch missiles at targets 4,600 miles away (Wall Street Journal, October 24, 2014). China’s land-based nuclear arsenal targeting the US already has an Arctic trajectory (Huanqiu Junshi Wang, July 21, 2015). In 2015, Global Times predicted that the next breakthrough for Chinese submarine forces would be accessing the Arctic Ocean (Global Times, November 11, 2013).

The Role of Russia and the BRI

Russia’s negative attitude has always been a sticking factor in China’s long-held Arctic military plans. People’s Liberation Army Navy (PLAN) submarines transiting to the Arctic must get through several chokepoints: (1) the straits that divide the Japanese archipelago; (2) the Bering Strait; and (3) Russia’s Severnaya Zemlya and New Siberian Islands along the Northern Sea Route. Japan, Russia and the United States closely observe these chokepoints and waters. A further potential barrier to PLAN sailing in Arctic waters is that there is a scarcity of detailed charts on Arctic sailing routes and bathymetrics. Currently, Russia is reputed to have the most precise route charts, though China’s polar researchers have mapped submarine and shipping routes in the Arctic for at least the last ten years. But what if Russia not only tolerated China’s submarines operating in its waters, but actively facilitated their presence there?

In May 2019, in a report for a Russian military magazine, Russian military specialist Alexander Shirokorad raised the possibility of Russia providing port support for Chinese submarines in the Arctic and proposed a joint Russia-China air and missile defense system for the Arctic (Nezavisimoye Voyennoye Obozreniye, May 17, 2019). In August 2019, the Russian ambassador to China invited Beijing to invest in port and infrastructure development in the Russian Arctic in order to open up the Northern Sea Route (SCMP, April 18, 2019). China’s Arctic submarine plan will require nuclear icebreaker back-up and friendly ports. Russia has ten nuclear icebreakers (the United States has none).

Russia is also an enthusiastic partner in Xi Jinping’s signature Belt and Road Initiative (BRI), which includes plans for a “Polar Silk Road.” China incorporated the Arctic into the BRI more than five years ago (Zhongguo Haiyang Zaixian, November 25, 2014). Among Arctic region countries, Finland, Iceland, and Russia have signed on to the BRI; while Denmark, Norway, and Sweden have adopted a wait-and-see approach. Canada and the United States have made it clear they will not sign on.

BRI partners participate in China’s Digital Silk Road, which utilizes Beidou-3, China’s indigenous global navigation system. The Beidou ground station at Norway’s polar scientific hub Svalbard is crucial for the global coverage of Beidou. By 2020, Beidou will have accuracy on par with the U.S. Global Positioning System (GPS) (Guangming Daily, September 12). Beidou, like GPS, provides missile positioning and timing, as well as access to fleet-based broadband for unclassified and classified systems and environmental situational awareness. During a potential conflict, if the United States denied access to GPS, China and Russia could employ Beidou and the Russian GLONASS to guide strike weapons and other military operations.

The United States now has two near-peer competitors to contend with in the Arctic, and increasingly, both competitors are cooperating on military matters. Yet we should not over-emphasize the importance of journalistic statements and political rhetoric on Chinese investment in the Russian High North. China’s Arctic military interests do not depend on Russian collaboration and support.

China’s Long-Term Plans for the Arctic

China has quite a long-term agenda in the Arctic. China has not been transparent about its intentions in foreign language materials; though if one can access the Chinese language discourse the policies and intentions are very clear. This reflects longstanding habits of CCP discourse management, whereby there is one message for foreigners and another for domestic audiences. [5] Foreign interlocutors trying to ascertain China’s Arctic policies need to access the message aimed at foreigners, as well as what is not intended for foreign eyes and ears.

The PLA is an important actor in planning China’s future polar strategy, and its role has long been disguised by China’s polar science program. But since Xi Jinping came to power in 2012, China has been more and more upfront about its interests and priorities in the Arctic. The PLAN is integrating recent political, economic, and strategic developments in the Arctic into its global maritime strategy. The PLAN is the world’s largest navy in terms of personnel, and second only to the U.S. Navy in fleet tonnage. In other words, China is steadily moving from being a land-based regional military power to becoming a maritime power with a global reach.

China’s Maritime Presence in the Arctic

China’s first ever freedom of navigation operation was conducted in U.S. territorial waters near Alaska on September 2, 2015 (SCMP, September 4, 2015). Five PLAN vessels, consisting of three surface warships, an amphibious vessel, and a supply ship, were participating in a military exercise with Russian forces near Vladivostok when they took an unlikely detour to the U.S. Aleutian Islands before heading home to Chinese waters. One month later, the PLAN gave a further demonstration of its Arctic interests by sending a destroyer, frigate, and a supply ship on goodwill visits to Denmark, Finland, and Sweden.

In order to operate safely in Arctic waters, the PLAN must have: accurate bathymetric charts; the capability to monitor Arctic atmospheric conditions and utilize remote sensing to identify the thickness of Arctic ice; submarine personnel experienced in  under-ice operations; submarines capable of navigating the aforementioned series of chokepoints safely and secretly; a Chinese nuclear icebreaker; and access to friendly seaports and airports in the Arctic.

In 2018, China’s State Oceanic Administration announced that it was planning to build a nuclear icebreaker. (The PLAN currently has 4 diesel icebreakers for port operations.) It will be used for polar science expeditions and to support Chinese shipping in the Arctic. It will also be built to PLA specifications and could be used to rescue Chinese submarines in the Arctic. In a time of war, State Oceanic Administration vessels are under PLA command.

Since 2003, China has followed the example of other polar great powers such as Russia and the United States in setting up short-term Arctic ice camps (冰站, bingzhan). This enables China to avoid Arctic sovereignty issues while establishing a scientific base useful for strategic science. [7] The United States uses Arctic ice camps as temporary command centers for training submariners to operate under the ice (Undersea Warfare, Summer 2018).

China and the Northern Sea Route

China—like the United States—regards Arctic sea routes as international straits, but neither Russia nor Canada accepts this position. China favors accessing the Northern Sea Route (NSR) as it crosses directly over the Arctic Ocean. China is adamant that it must be included in setting the norms for international shipping along this route. [10] Beijing stresses its interest in the Arctic sea route as a means to position China as having legitimate interests in the Arctic region, so that it can ensure that it has a seat at the table in any future Arctic-related negotiations. [11]

From the point of view of China and the United States, the opening of the Northern Sea Route as a regular, ice-free sea route in the summer months could turn Russian and Canadian territorial waters into acknowledged shipping straits—which would mean that international-waters rules would then apply for submarine transit. [12] 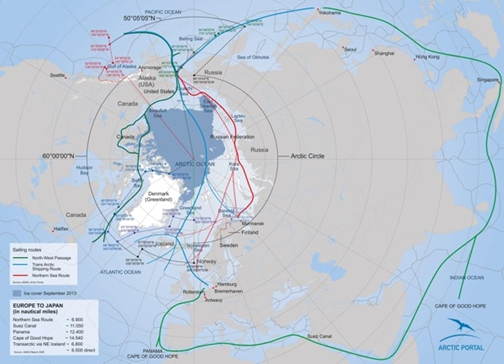 China has a credibility gap when it comes to Arctic affairs, so it is working hard to shape the international narrative on its involvement in the region. China’s military interests in the Arctic are missing from the narrative China promotes to foreigners, but are prominent in materials available in Chinese. Understanding the pace and extent of China’s Arctic military interests requires access to Chinese language sources and knowledge of China’s interlocked strategic, economic and science activities in the Arctic.

China’s military interests in the Arctic are merged with commercial objectives, what I call the Party-State-Military-Market nexus (党政军企共建, dang-zhen-jun-qi gongjian). Some of China’s Arctic science activities have both civil and military use ends. [13] The challenge for other states in the Arctic will be working out which partnerships with China are benign or mutually beneficial, and which will serve as force multipliers for the PLA. If China succeeds in its military goals in the Arctic, then its ascendance as a new global power will be certain.

Professor Anne-Marie Brady is a China and polar politics expert at the University of Canterbury in Christchurch, New Zealand.

← The United States Needs A Strategy For Artificial Intelligence
Russia Takes Over Third U.S. Base In Syria – The Moscow Times →