December 30, 2019 · by Support CMShelplive · in national security · Leave a comment

by Robert A. Manning and Mathew J. Burrows 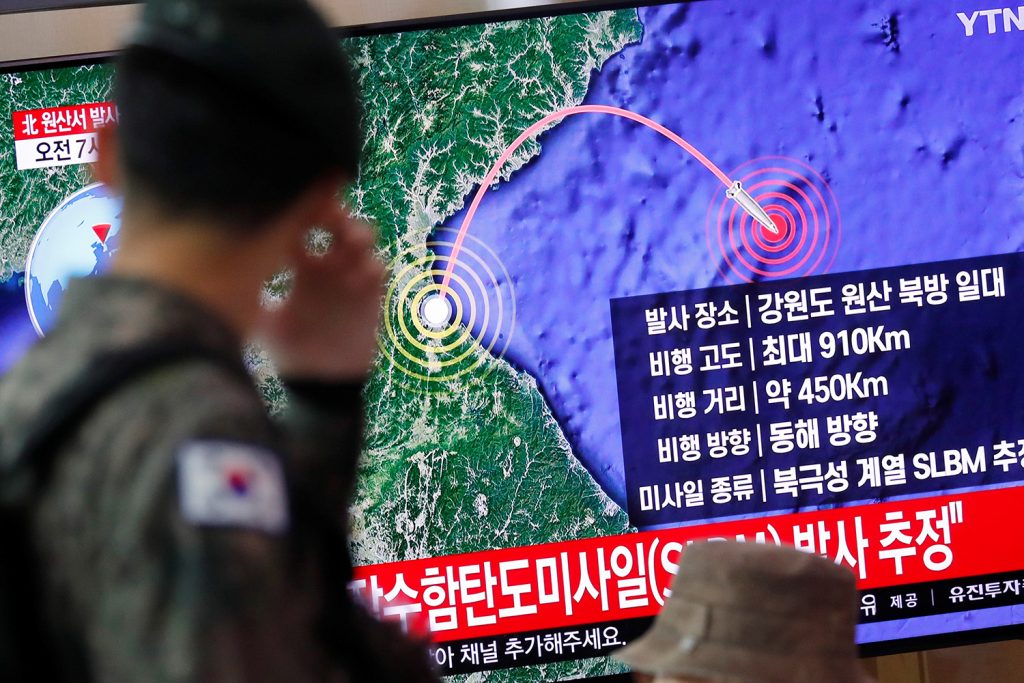 A South Korean soldier walks past a TV broadcasting a news report on North Korea firing a missile that is believed to be launched from a submarine, in Seoul, South Korea, October 2, 2019. REUTERS/Kim Hong-Ji

2019 did not offer any great surprises or ‘Black Swans,’ but the fragile world order did move further down the path of unraveling. 2020 will likely bear more resemblance to the 1930s, as some of the developments which did not reach a denouement in the past year cross the finish line. Several simmering conflicts, symptoms of a global system under strain from US President Donald J. Trump’s “anti-globalist” America First doctrine, could well reach breakpoints in 2020. This may include a shift from the mere corroding of multilateral institutions and US alliances toward total dysfunction. Growing global populist and nationalist outbursts are likely to dampen the potential for global cooperation, despite authoritarians facing more pressure from their citizens. 2020 could also see US allies and partners continuing to move beyond just hedging against US uncertainty towards pursuing global diplomacy and establishing new institutions without the United States following a potential Trump reelection.

Here are ten of the top geopolitical risks to watch out for in 2020:

2020 elections: Either a Trump reelection or a victory for a Democratic challenger is bound to deepen US political tribalism. A Trump victory would set the United States up for four more years of withdrawal from the multilateral world order, while a narrow Trump loss could cause domestic political turmoil. A victory for the Democrats could also fuel uncertainty and fierce opposition over a potential wealth tax, more regulations on business, and an overhaul of the health system, perhaps sparking fierce reaction from markets. It is also not a given that a Democratic victory fully reverses the tendency of the United States to retreat from engagement across the world. Trump win: 60-40 probability.

Brexit will finally occur in the wake of the massive Tory victory by British Prime Minister Boris Johnson over Labour and the Liberal Democrats. The UK will be out of the EU by January 31, but it is less clear whether the December 31, 2020 deadline for completion of a UK-EU trade deal can be met. Johnson wants to rule out any extension of the Brexit process, with the risk that the UK departs the single market without any trade deal. The EU, led by France and Germany, are increasingly wary of a UK which tries to undercut the single market by not adhering to the same environmental, labor, and other standards. Trump has promised quick movement towards a US-UK trade deal, but will Johnson want to pay the price? Opening the gates to cheap US agricultural goods could undermine Tory base support and stir public anger. A quick win on a deal with Washington isn’t likely to compensate for uncertainty over talks with Brussels, as the UK trades more with the EU than elsewhere. Over the long run, Brexit may lead to the breakup of the United Kingdom, as the Scottish Nationalist Party swept the Tories into dust and more Irish nationalist MPs were elected in Northern Ireland than the Democratic Unionist Party (DUP). A UK-EU free trade deal could end up formalizing the Irish Sea as the border between the two trade zones. Probability of UK-EU trade deal by end of 2020: 50-50 with much less probability (25 percent) for UK-US deal in 2020 given the political problems of passing any trade deal in a presidential election year.

The great unraveling: With the demise of its dispute mechanism, the World Trade Organization—the lynchpin of seventy years of prosperity and a rules-based economic order—may also become defunct. In the best case, after a lapse of six to twenty-four months, an arbitration mechanism with a much-reduced mandate and a reformed—but also diminished in scope and authority—WTO may emerge as global supply chains erode. In any case, universal rules and enforcement will be less important in shaping the terms of trade than the size and power of major economies. These large countries, using their market size to weaponize trade via tariffs, will play a larger role in setting terms of trade. Meanwhile preferential trade arrangements, bilateral (e.g. EU-Japan, EU-ASEAN) and multilateral (Comprehensive and Progressive Agreement for Trans-Pacific Partnership, Regional Comprehensive Economic Partnership, Eurasian Union), will take on more importance in shaping rules. The latter group—often excluding the United States—could become the new normal for global trade. Probability: 60-40;

A bifurcated world: Despite a modest US-China trade war pause, the decoupling of the world’s two largest economies amid growing techno-nationalism on both sides is driving a new global economic dynamic. The main elements of Beijing’s predatory mercantilism (substantive subsidies to state-owned enterprises and “national champions,” “digital sovereignty” in pursuit of ‘Made in China 2025,’ and economic coercion of foreign investors) remains largely undiluted. Washington is seeking to disrupt supply chains linking the United States and China, cutting off investment, scientific exchanges, and tech exports and imports from China. Decoupling will occur largely in the telecom/5G and electronics/IT sectors, and sensitive national security-related industries, resulting in a fragmented internet and e-commerce. The disruption in global innovation and supply chains will render Washington’s ‘Indo-Pacific policy’ problematic. The fact that only three of sixty-one nations complied with the United States’ request to cut ties to Huawei offers a preview of the costs to the United States of a bifurcated global economy. After all, China is the number-one trading partner of all US Asian allies and partners, and a top trading partner with the EU and many Latin American nations. Probability of bifurcated world: 60-40;

North Korean defiance: Whether or not Trump agrees to another summit with North Korean leader Kim Jong Un, it will become clear in 2020 that Kim has made a strategic choice: he has no intention—despite US incentives—to dismantle his nuclear arsenal in the foreseeable future. This is increasingly evident as he continues his ballistic missiles and nuclear tests—thirteen sets of ballistic missiles tests since May—and an ICBM test is likely soon. Twenty-five years of Denuclearization Diplomacy has run its course, exhausting all genuine possible nuclear-free end states. Kim pursues the “new path” he warned of in his end-of-year ultimatum. Kim’s goal is to be a de facto nuclear state like Israel or Pakistan, to be accepted as a normal nation. Kim prefers a “muddle through” North Korean model, accelerating cybercrime to accumulate bitcoins and other illicit activities, boosting ties to Russia and China who are eroding sanctions, and incrementally building economic cooperation with South Korea. Trump, feeling humiliated that his bromance was betrayed, has initially pretended that all is well—”Kim is my friend,” “we’re in no rush.” But soon will come the wrath of “fire and fury” threatening confrontation with a serious risk of conflict sparked by miscalculation. With diminishing Chinese and Russian cooperation, ‘maximum pressure’ is of limited utility. War remains an unthinkable, catastrophic option, and mutual deterrence needs to hold. Next phase: How to live with a nuclear North Korea. End of denuclearization diplomacy: 65-35;

Nuclear stability unravels, The New START and Open Skies agreements follow a Trump pattern of withdrawing from “globalist” treaties. Thus, the United States is ending the architecture of restraint, and starting a Hobbesian world of all-against-all, un-learning the lessons from the Cold War of avoiding an arms race. This is happening at a moment when new risks to crisis stability (secure second strikes) are growing from non-nuclear emerging technologies (AI, offensive cyber, anti-space weapons, and hypersonic missiles). The nuclear “doomsday” clock stands at two minutes to midnight. Probability: 60-40;

Demise of US traditional alliances: The global leadership deficit grows in a fragmenting world order. Ad-hoc regional security networks are taking shape by key partners in Asia and Europe. With his impulses unchecked, Trump’s narrow transactional view of alliances may lead him in 2020 to “bring the boys home,” withdrawing at least 6,000 troops and unwinding the US-Republic of Korea alliance. A similar dynamic threatens the US-Japan alliance, with Tokyo building ties to new economic and security partners. The European Union, in the wake of the perceived success of its data privacy protection legislation, Trump’s ceaseless disparaging, and Beijing’s efforts to use economic enticements to split off eastern Europe, will accelerate moves to protect its economic and political sovereignty against the United States and China. End of US-ROK alliance, probability 50-50 (strong Department of Defense and Congressional pushback).

Nuclear proliferation. North Korea is making new strides toward becoming like accepted de facto nuclear states Israel and Pakistan, reflecting a growing pattern of US retreat and unreliability. This will lead US allies and partners to rethink US security guarantees. The Republic of Korea and Australia, already pondering nukes, may move to the next stage of actively considering them in 2020, as may Japan. If the Iran nuclear crisis is not resolved, expect the Saudis to buy or rent a nuke from Pakistan. Active moves toward Asian & Middle East proliferation: 40-60;

Post-US Middle East: Trends already percolating with Saudi-Gulf Cooperation Council backchannel diplomacy with Iran evolve toward a new regional balance of power and recalibrated Saudi-Iran rivalry. Spurred by Trump’s non-response to Iranian belligerence and US incoherence in Syria, as well as a need to end the war in Yemen and stabilize Syria, regional actors become more pro-active, with Russian President Vladimir Putin as a power broker and a more active EU diplomacy. Similarly, after more sturm and drang (with a possible US-Iran clash by miscalculation), the EU and Putin facilitate a new Iran nuclear deal 2.0 (a la NAFTA 2.0) with longer sunset provisions and missile constraints. Trump calls it a great deal. At the same time, reactions to Iranian overreach, with anti-Iran protests in Iraq, Lebanon, and internally against the Khamenei regime, help to push Tehran toward a new deal, limiting their regional influence, and dampening populist-driven change in the Middle East. Probability: 55-45.

Gray Swan: A China reckoning/ world financial crisis: A perfect storm involving a simultaneous slowdown in the three economic centers could catapult the global economy into another deep economic crisis. China’s internal contradictions are growing, including massive public, household, and corporate debt (300 percent of gross domestic product), aging demographics (labor shortages, pension, and healthcare demands), and sagging growth (two to three percent in real terms). The United States also suffers from growing debt problem at the Federal government level, plus substantial corporate debt at a time of record low interest rates. The US Federal Reserve worries its fiscal and monetary instruments may not be up to the job for dealing with even just a recession. Equally, slowing growth and the EU’s divisions in the wake of its uneven recovery from the 2008 financial meltdown make it an unlikely candidate to pull the world out of a recession. This would be more dangerous than 2008, as central bank cooperation and US Congressional action are more problematic. Probability of a world financial crisis in 2020: 35-65

Robert A. Manning is a resident senior fellow in the Atlantic Council’s Scowcroft Center for Strategy and Security. Follow him on Twitter @Rmanning4.

Mathew J. Burrows is the director of the Atlantic Council’s Foresight, Strategy, and Risks Initiative in the Scowcroft Center for Strategy and Security. Follow him on Twitter @matburrows.

This piece also appeared in The National Interest.