February 11, 2020 · by Support CMShelplive · in Australia, Department Of Defense, Japan, military history, national security, Philippines, South Korea, Thailand, Vietnam · 2 Comments
How much suppport does Duarte have among the key influential Philippine military community (rertired/active duty) for this policy? Is this a truning point that was coming regardless of Duarte? Or is he a one-off, and this policy will be rescinded as soon as he is no longer President? If this decision was telegraphed and in the works for a long time, then does the U.S. now look elsewhere — Australia, Vietnam, Singapore, Thailand, etc.? And, if Duarte is ‘out on a limb on this,’ does this decision begin the unraveling of his Presidency? RCP, forrtunascorner.com

The notice comes as President Rodrigo Duterte has been warming up to China and increasingly distancing Manila from the United States, its longtime ally. 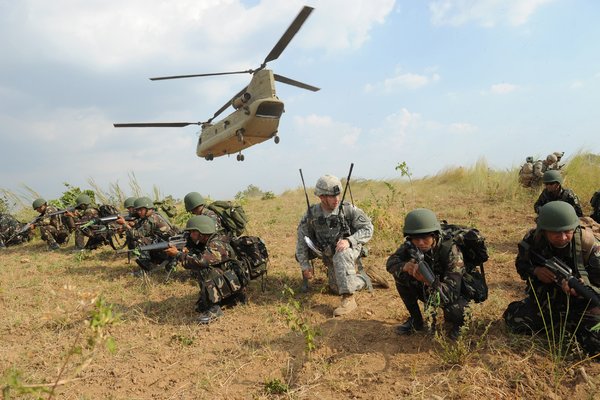 An American soldier with Philippine counterparts during an exercise in 2015.

MANILA — The Philippines said Tuesday it had officially informed the United States that it was scrapping a military pact that has given the longtime American ally a security blanket for the past two decades.

The notice to terminate the pact, the Visiting Forces Agreement, comes as President Rodrigo Duterte has warmed up to China while distancing himself from the United States, the Philippines’ former colonial ruler. The move also comes as the Philippines has shown increasing reluctance to stand up to China over its territorial claims in the South China Sea.

The agreement lets the United States rotate its forces through Philippine military bases. It has allowed for roughly 300 joint exercises annually between the American and Philippine militaries, said R. Clarke Cooper, the assistant secretary of state for political-military affairs. He told reporters Monday that the termination of the agreement would put those operations “at risk.”

The agreement still remains in force, but the notice to terminate it, delivered to the American Embassy in Manila, starts a clock under which it will remain in effect for 180 days before lapsing.

“The deputy chief of mission of the United States has received the notice of termination of the Visiting Forces Agreement,” Foreign Secretary Teodoro Locsin said on Twitter in announcing the move.

The decision by the Philippine government comes as Mr. Duterte has grown increasingly belligerent toward the United States, principally over Washington’s refusal to grant a visa to Senator Ronald dela Rosa, the early architect of Mr. Duterte’s violent war against drugs.

Mr. Duterte’s threats to end the pact have alarmed some in his own administration, who see the American military alliance as a bedrock of Philippine security and a counterweight to China’s growing naval might in the South China Sea.

Appearing before the Philippine Senate last week, Mr. Locsin cautioned against ending the pact, which has allowed for large-scale joint military exercises between the two allies after the American military was kicked out of the Subic and Clark naval bases north of Manila in the early 1990s over lease disagreements. The bases were once the largest American military installations outside the United States.

The foreign secretary said neither he nor the Philippine Department of National Defense was asked for advice on ending the pact. Without the agreement, Mr. Locsin said, the United States would have its hands tied in assisting the Philippines, its oldest military ally in Asia, should it come under attack.

In recent years, the United States has stepped up naval manuevers with the Philippines as it seeks to counter China’s growing challenge to the historic American naval dominance of the South China Sea. The frequency of those maneuvers has alarmed some in the Philippines, with the defense secretary, Delfin Lorenzana, warning last year that they could provoke conflict with China.

In addition to courting the Philippines, China has used its clout and economic might to bring other Southeast Asian countries into its sphere of influence, including Cambodia, which American officials fear is being turned by Beijing into a military outpost for Chinese ambitions.

Many Philippine military leaders and politicians favor sticking with the joint forces treaty, and lawmakers have said that ending the country’s participation in the agreement would require the Senate’s assent.

The United States played a pivotal role in aiding Philippine forces in their defeat of Islamist militants who took over the southern city of Marawi in 2017.

But Mr. Duterte, a leader known for his volatility and for making threats he often does not carry out, seems intent this time on bucking the United States.

On Monday night, he again lashed out at America and its military, saying Washington had always gotten the better end of the deal. He said that after large-scale war games, the American troops just go home, taking their modern weapons with them.

“They do not leave it with us. None,” Mr. Duterte said. “Besides, if you buy, it is expensive.”

“Trump and others are trying to save the Visiting Forces Agreement,” he added of the American president. “I told them, I do not want to. One is that Americans are very ill mannered,” he said, cursing Central Intelligence Agency agents who he said may be listening to him.

He also dismissed the deterrent effect of American forces against outside influences like China.

“They do not mean harm,” he said of China and its military, as long as “we do not also do something that is harmful to them.”

← Four Members of China’s Military Indicted Over Massive Equifax Breach
‘The Intelligence Coup Of The Century’ For Decades, The CIA Read The Encrypted Communications Of Allies And Adversaries. →