Comment From Dr. Mark Schneider:  “The Global Times is the main Chinese English language IO outlet. It would not publish something like this without high level sanction. EMP is not really my area and I have not researched Chinese EMP for over a decade. When I did, I found a lot of Chinese literature on EMP and some of it explicitly on non-nuclear EMP. I have not see anything which suggests that lasers, much less low energy lasers, can produce militarily useful EMP effects. I found one Chinese language publication which threatened holding a nuclear test in space 1,200-km from Taiwan to attack the U.S, Navy and I found discussion of EMP attacks, including nuclear EMP attacks on Taiwan as part of an invasion.” 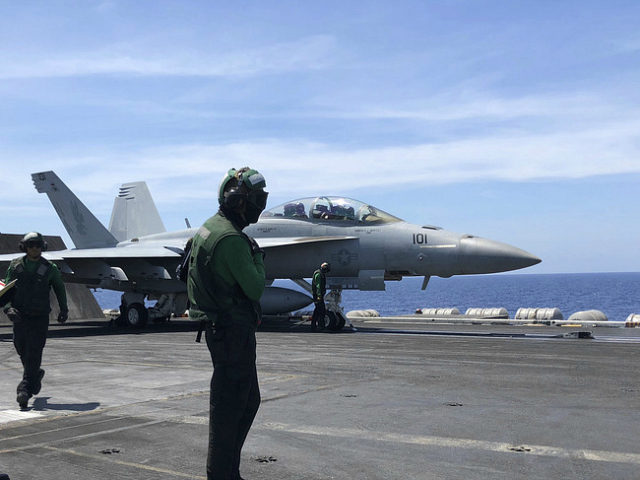 6:15
Chinese state media on Tuesday rather unsubtly decided this would be a good time to chat with a panel of “experts” about the possibility of using an electromagnetic pulse weapon (EMP) against American ships that enter portions of the South China Sea illegally claimed by Beijing.
The timing suggests it was a bit of saber-rattling by a Communist Party nervous about its power and prestige after the Wuhan virus disaster, but some degree of escalation in the South China Sea has long been a concern for the U.S. Navy and ships from across the free world.
To put it bluntly, an EMP strike on U.S. warships would involve detonating a small nuclear warhead above them, but China’s state-run Global Times threw in some speculation about “low-energy laser devices” to keep their saber from rattling too loudly:

To counter US’ repeated trespasses into Chinese territorial waters, the Chinese military has the option of using new approaches, including the deployment of electromagnetic weapons, Song Zhongping, a Chinese military expert and commentator, told the Global Times on Tuesday.
Firing at US warships is not a good choice unless the US fires first, and that would result in the start of a China-US military conflict, Song said, noting that bumping into US ships might also not be a good counter, as lessons have been learned from the Black Sea bumping incident between the Soviet Union and US in 1988.
But the use of electromagnetic weapons, including low-energy laser devices, could be viable, as they can temporarily paralyze US ships’ weapon and control systems without visible conflict but can send a strong warning, according to Song.
Electromagnetic weapons can emit electromagnetic waves that can potentially jam electronic devices of target vessels and will not cause casualties, military observers said.
The US accused a Chinese destroyer of using lasers on February 17 on its patrol aircraft near Guam, even though it was the US aircraft that had initially conducted repeated close-in reconnaissance that interrupted the Chinese fleet’s normal navigation and training. This is a good example and could be applied more, Song said.

This is almost as dishonest a framing of the February laser incident, and others like it, as the Chinese fairy tale about a U.S. Army lab developing the coronavirus. The Chinese laser attack on a U.S. Navy aircraft flying over international waters on February 17 was unprovoked, unprofessional, unsafe, and a clear violation of both maritime law and safe-conduct policies for the region endorsed by Beijing.
These EMP threats were prompted by the most recent series of U.S. Freedom of Navigation operations (FONOP) in the South China Sea, which essentially involve sailing through waters claimed by China to demonstrate that international freedom of navigation will be protected. The Chinese are particularly exercised by the presence of the aircraft carrier USS Theodore Roosevelt and its strike group in the region, and while the Global Times did not explicitly mention it, the USS Theodore Roosevelt’s visit to Vietnam was deeply troubling to Beijing.
“This is the third time in just a week US warships are known to have trespassed into the South China Sea: US guided missile destroyer McCampbell on March 10 trespassed into China’s territorial waters in the Xisha Islands, and amphibious assault shipAmerica and littoral combat ship Gabrielle Giffords sailed in operations in the South China Sea on Friday,” the Global Times complained.
“Xisha Islands” is China’s name for the Paracel Islands, which the guided-missile destroyer USS McCampbell sailed near on March 10. Vietnam and Taiwan both have claims in the Paracels. The Chinese People’s Liberation Army (PLA) claimed it “warned” the American ship to leave, while the U.S. Navy said the ship completed its “security and stability operations” normally.
USS America and USS Gabrielle Giffords conducted joint operations in the South China Sea on Friday to test unified command and control and practice tactical maneuvers. The ships do not appear to have ventured into the waters claimed by China.
“By combining America’s lethality provided by the Navy-Marine Corps Team with the speed and maneuverability of a littoral combat ship, we’re forging new ways to operate together in one of the most important regions in the world,” Expeditionary Strike Group 7 commander Rear Adm. Fred Kacher said.
The PLA pulled a few deliberately provocative maneuvers of its own on Monday, sending a flight of warplanes across the Taiwan Strait in a rare night exercise. The Taiwanese scrambled their own fighters to “shadow, intercept, and disperse the Communist warplanes,” according to Taiwan’s defense ministry.
The South China Morning Post quoted analysts who said Beijing wanted to send one of its periodic threats to Taiwan while also demonstrating the coronavirus epidemic has not weakened the PLA:

“In addition to enhancing all-weather capability of its military fleet, the communist warplanes’ fly-by is aimed at sending out the message that it is business as usual with PLA war games despite the coronavirus outbreak in mainland China,” said Alexander Huang Chieh-cheng, a professor of international affairs and strategic studies at Tamkang University in Taipei.
He said the PLA’s night drill was also aimed at testing the response of forces such as the United States and telling them that the mainland’s air force can carry out night-time combat operations.
“Of course, it is also aimed at intimidating Taiwan,” Huang said.

The Global Times portrayed the night exercise as a warning to Taiwan that will become more frequent if “secessionist forces remain stubborn and continue their secessionist activities.”
The Chinese state newspaper curiously quoted only Taiwanese sources about the incident, but slipped in a comment from an unnamed “military expert” who said Monday’s flight was unprecedented proof that the PLA “is fully capable of launching military operations on the island at any time of a day.”

← Why North Korea Could Be A ‘Long-Term Incubator’ For Coronavirus
The Lost Battle Of The South China Sea, Refought →