An infectious disease breaks out in a densely populated metropolis and is spreading rapidly, causing respiratory failure and death in its victims. As local containment and response mechanisms break down and cases multiply, it becomes clear that a global response — spanning governments, humanitarian organizations, health agencies and the military — will be required.

That scenario is not a condensed narrative of the COVID-19 pandemic that currently has much of the globe on lockdown. Rather, it’s the premise of a war game run last September by the Naval War College (NWC) in Newport, Rhode Island. And its findings — released in summary format Wednesday — reveal prescient and sometimes troubling parallels to the real-world response effort that continues today.

Some of the conclusions, such as the way forced mass quarantine can backfire and trigger additional disease spread, and how the mortality rate is better than the overall number of disease cases in assessing the scale of an outbreak — have been proved out through the response to the novel coronavirus. 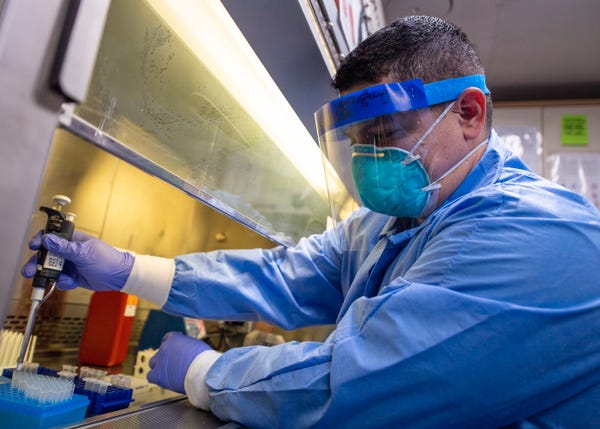 “Even in the planning phase, the military and government may (consciously or unconsciously) exhibit avoidance behaviors to limit the scope of their involvement with affected and/or infected populations in the field,” one of 16 conclusions in the 12-page summary document notes.

Another conclusion assesses the tendency of “experienced professionals” to meet unusual or unprecedented conditions in the scenario with resistance.

“This can directly inhibit effective planning and adaptation,” it adds.

Benjamin Davies, the game’s designer and the associate director of research for NWC’s civilian-military humanitarian response program, said that, for the mid-grade and senior officers participating in the game, one challenge came down to a recurring theme for the military: a tendency to fight the last war instead of the current one.

“In this case, there may have been a fairly significant hangover from the ebola response,” Davies said, referring to the deadly outbreak of the virus between 2014 and 2016 in West Africa.

Davies, who spoke to Military.com on his own behalf and not to present an official position of the college, Navy or Defense Department, added that, during the ebola outbreak, which resulted in more than 13,000 deaths, the US military was not supposed to provide direct aid to infected populations.

“When players got in the game, they were really stuck on that guidance,” he said. 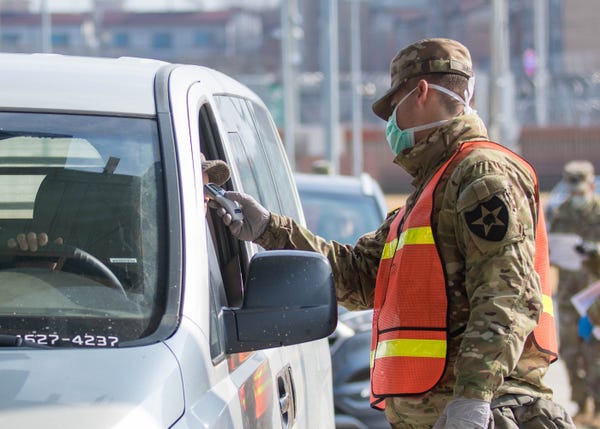 A US soldier takes the temperature of a motorist at one of the gates to US Army Garrison Humphreys, South Korea, Feb. 27, 2020.US Army/Pfc. Kang, Min-jinAnother possible holdover from the experience supporting the ebola response was a hesitancy to game out scenarios in which troops had direct contact with infected populations or regions, he said.

“In a lot of different ways, either passively or actively, the military players ended up gravitating toward higher-level discussions that didn’t put them on the ground or didn’t put their troops in harm’s way,” Davies said. “It’s very hard to separate avoiding the population that’s infected from protecting your own troops.”

Also of note, according to the summary document prepared by Davies, is the resistance from game participants, including some in the military, to including game elements that didn’t correspond to their prior experience. That included the notional disease itself.

Instead, the game focused on a “known and curable bacterial pathogen.”

The Defense Department’s coronavirus pandemic response effort has been under a magnifying glass, in part because it supports a contained population that undertakes extensive global and domestic travel and spends lengthy periods in confined environments and in close proximity as part of routine operations.

The Defense Department has been widely criticized as being slow to issue guidance curtailing its own operations and limiting activities that multiply risk, such as entry-level training and underway periods that are not mission-essential.

At the same time, the military has had to surge capability in unfamiliar ways in support of the broader response effort, including the mobilization of National Guard units, the deployment of hospital ships and mobile field hospitals, and preparations for the possible activation of Selected Reserve members and recall of recently separated troops.

Officials have worked rapidly to develop ways to successfully employ assets designed for trauma and non-contagious disease — including the ships and field hospitals — such as filling them with non-COVID-19 cases in order to free up space in more specialized facilities. 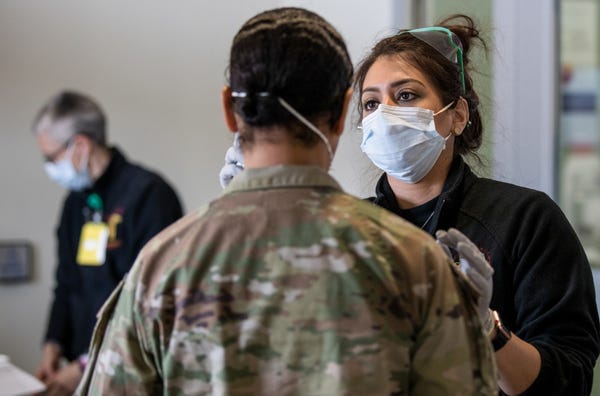 Krystal Moore, LPN, takes the temperature of a soldier at a clinic at Joint Base Lewis-McChord in Tacoma, Washington, March 24, 2020.Photo by John Wayne Liston/Madigan Army Medical CenterDavies declined to comment on the military’s real-world response efforts. Specific to the fictional war game scenario, he pointed out that the game stretched the military participants, in particular, to operate in ways far beyond what was typical for them.

“The military players had a real challenge in front of them because they were doing a mission that they don’t often do, and they were given tons of ambiguity in terms of authorities so that they could make their own decisions,” he said. ” … The way [command-and-control] should work for them did not work in this game — we actually removed it completely. And we gave them command authority. And that’s really challenging for people who are not used to that.”

Dave Polatty, director of NWC’s Humanitarian Response Program, told Military.com via email that the program is now in the middle of “detailed analysis” on the similarities and differences between the fictional war game disease and COVID-19.

“Right up until the current crisis, our brilliant game partners at the National Center for Disaster Medicine and Public Health and Johns Hopkins Applied Physics Lab have been working tirelessly with us to identify the pandemic challenges we might face,” said Polatty, who also stressed he spoke on his own behalf and not on behalf of the school or DoD. “We will continue to publish anything we can that will give us an edge in this fight. We believe our mission is to help the responders who are struggling and deserve all the assistance we can offer.”

NWC, he said, has a network of experts ready to support current disease response efforts and a library of research and reports available to decision-makers.

“This is a challenge that requires everyone to look to the experts in every field because no one organization is going to have the monopoly on life-saving solutions,” he said.

Do you have a personal experience with the coronavirus you’d like to share? Or a tip on how your town or community is handling the pandemic? Please email covidtips@businessinsider.com and tell us your story.

And get the latest coronavirus analysis and research from Business Insider Intelligence on how COVID-19 is impacting businesses.

← Extremists See Global Chaos From Virus As An Opportunity
Richard Preston, Author Of The Book “Hot Zone,” That Was Later Made Into A Hollywood Movie ‘Outbreak,’ Was Interviewed On CNBC’s Squawk Box On His Thoughts On The Coronavirus Pandemic →