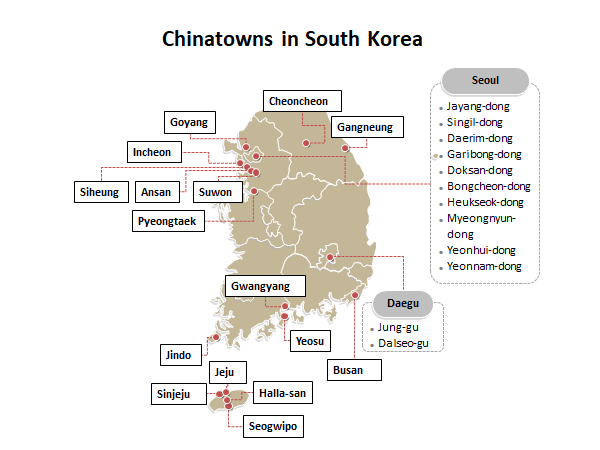 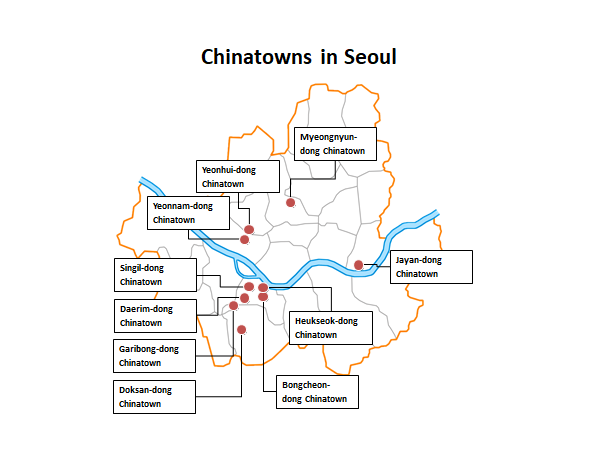 A massive Chinatown is being built in a large area in Chuncheon City and Hongcheon County in Gangwon Province (east of Seoul), South Korea, as part of China’s Belt and Road Initiative. (0:06) The land area of this “China Cultural Complex Town” is 1,200,000 square meters (=129,166,923 square ft = 297 acres = 168 soccer fields), which is inside the La Vie Belle Tourism Zone (라비에벨관광단지). (0:07) It is 10 times larger than the Chinatown in Incheon, where the oldest Chinatown (and also the only one in South Korea for decades until recently) is located; it has expanded greatly in the last decade or so. (0:15) 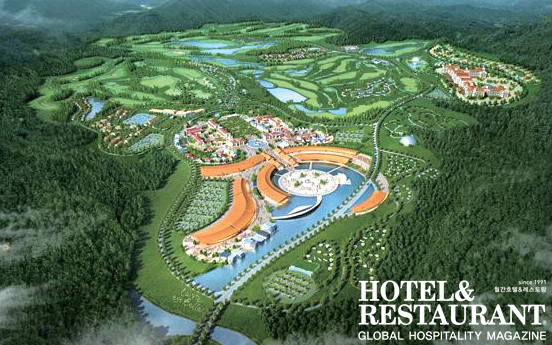 The estimated project cost is ₩600,000,000,000 (~$90 million), and the Internal and External Residents Company is to raise funds, and Chinese capital will likely play a key role. (0:43) This is in line with China’s Belt and Road deals, which involve China lending vast amounts of money to other countries for ventures and infrastructure projects. The People’s Daily and People’s Network will be in charge of developing the project planning, “cultural content,” finding Chinese investors, promotion, and advertising of the cultural complex project. (1:26) 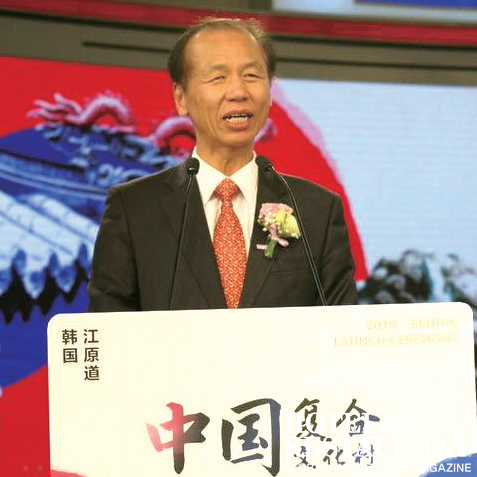 Gangwon Province Governor Choi Moon-soon visiting ChinaGovernor Choi Moon-soon is in the ruling party, the Deobureo Minjoo Party (Democratic Party of Korea), which has signed an MOU with the CCP. Choi has stated he is “glad to attend the meaningful ceremony officially announcing the “China Cultural Complex Town,” China’s only “One Belt One Road” project in South Korea” [it turns out there are more] and described the Chinatown as “a little China in Gangwon Province, the Republic of Korea.” (0:51) Although the South Korean government has not officially stated it is participating in the “One Belt One Road” project, the Chinese official website on One Belt One Road stated it as such as well. (2:47) Choi will provide licensing, visas, and other administrative support for the project. The governor’s office expects increased tourism.

National security experts, however, are expressing strategic and security concerns. Less than 10 minutes away are numerous military installations, including one for the 11th Division (Reserves). (1:01) Professor Park Hui-rak stated there are reserve forces in Hongcheon, and these reserve forces are even more important than the active duty in some ways, and he expressed concern that a country that views South Korea as a vassal state is so near the military facilities and forces important to South Korea’s national security. (1:15) Nearby is also one of the key combined training ranges for the South Korean and U.S. militaries. Many local residents were not aware that such a huge Chinatown is being built in the region. (1:38)

In addition to the “China Cultural Complex Town,” a 15-story luxury hotel for Chinese tourists is also under construction in Jungdo (Middle Island), a different part of Chuncheon City. This is at a historical site where they discovered over 10,000 historical artifacts, making it one of the world’s largest prehistoric artifact sites. (1:55) Gangwon Province pressed ahead with the construction, despite the opposition of the civil society organizations for preserving artifacts and the site. 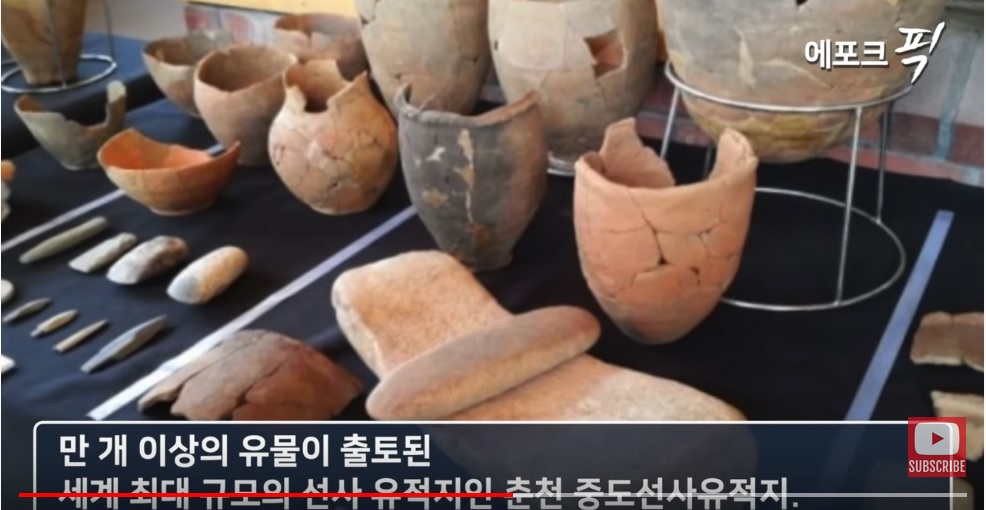 Prehistoric artifacts from a historical site in Chuncheon, Gangwon Province, South KoreaKim Jong-moon, the representative from Chuncheon Jungdo Prehistoric Artifacts Preservation Headquarters, expressed yet another concern–China’s attempt to rewrite the history of the neighbors with its Northeast Asia Project, which covers Manchuria and northern Korea with a claim of a multi ethnic unified state of greater China. With China’s claim over Gojoseon (ancient Joseon), Goguryeo (prior to Koryo, from where the name “Korea” was derived), and Balhae as part of its history, it sparked a conflict between South Korea and China in the early 2000s. Mr. Kim said the prehistoric artifacts in Chuncheon destroy China’s claim that ancient Korea was part of Chinese history, and by creating a China Cultural Complex Town in Chuncheon City and Hongcheon Country, China completes its invasion of history. (3:02)

The China Cultural Complex Town in Chuncheon and Hongcheon are not the only Belt and Road Initiative projects of China in South Korea. Even more massive is the Chinatown under construction in Jindo (Jin Island), South Jeolla Province (전남 진도 차이나타운). Jindo, with a population of 30,000, is South Korea’s third largest island connected to the Southwestern tip of the peninsula by a bridge, and is across the strait from Jeju Island, where there also are numerous Chinatowns. Whereas the massive Chinatown in Chuncheon and Hongcheon is 297 acres (1,200,000 square meters), the one in Jindo is 8,169 acres (10 million Pyeong), nearly 28 times bigger. Jindo County confirmed the signing of an MOU with BP Group for the development, but refused to share the MOU, stating there are not many details in the MOU. According to Sisa News published in September 2018, the BP Group, a Korean firm in Hong Kong, signed an MOU with China Railway Construction Corporation Ltd., and Jindo County to invest ₩17 trillion (~$150 billion) in the Jindo area. China Railway Construction Corporation, owned by the Chinese government, is planning to build various projects in Jindo, including resorts, port development, electric vehicles, bio medical, beauty, and university(s). According to the World Bank website article dated June 5, 2019, China Railway Construction Corporation was debarred from the World Bank projects due to falsifying information in the procurement of a highway project in Georgia. 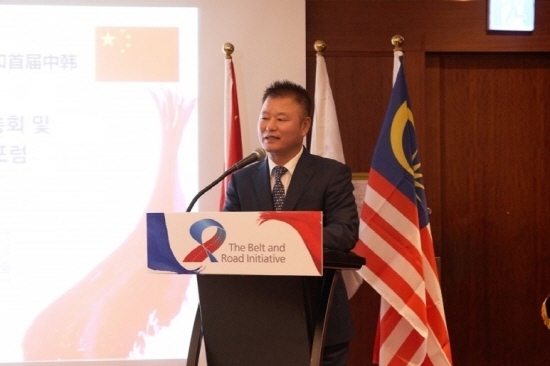 South Korea-China Belt and Road Initiative Business Association Chairman and BP Group Chairman Lee JoonSisa News also stated, “Chinatown is also one of the projects that China Railway Construction Corporation considers very attractive. If a large-scale China town is built in Jindo, many Chinese people may migrate, and there may be a new style of culture by fusion of Korean and Chinese culture.” It further states that the most important project is to build a South Korea-China university to send Chinese students to South Korea as part of the Belt and Road Initiative, which is not just building infrastructure, but extending China’s influence and control.

To support China’s Belt and Road Initiative, the South Korea-China Belt and Road Business Association, which is a council of Korean and Chinese companies, was founded in August 2017, and the first chairman of the company is the chairman of the BP group, Lee Jun (이준). Lee generously donated ₩1 billion ($891 million) to the Association, impressing many of the attendees. It is unclear where the $891 million came from or how BP raises funds. In fact, it is unclear exactly where BP Group is located or how it can be contacted. When an investigative reporter at Chosun Monthly tried to contact BP Group in Hong Kong and its branch office in Korea as listed on its website, he could not establish communications with the BP Group as the phone continuously beeped and the emails sent were bounced back. When he called the building management office at the branch office in Seoul, the manager said there is no such business in the building, and that said name never moved into the building. It is puzzling that a company that handles projects worth hundreds of millions of dollars does not list correct addresses, phone numbers, or the emails of its business on its website.

The Belt and Road Initiative in Jindo is little known to South Koreans, but has alarmed those who became aware of it, prompting them to petition the Blue House to stop the projects. The petitions include “Please stop the construction of Jindo Chinatown” posted on December 23, 2018 and “Please stop constructing 50,000 Chinese cities in Jindo, South Jeolla Province” posted on December 25, 2018.

The second petitioner explained that “The reason why I petition is not that I hate the Chinese. And I am not a racist. However, I’m asking (you to) prevent repeating the same history as the 1919 Japanese annexation of Korea,” expressing his/her concern about South Korea becoming a colony of China.

29 Chinatowns in South Korea and counting 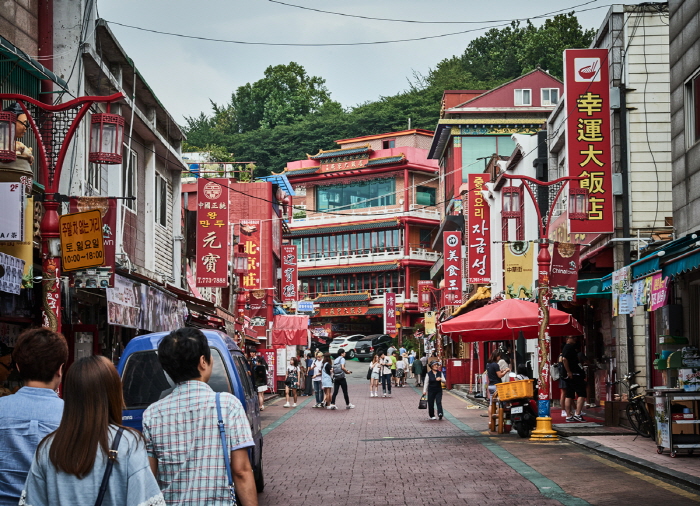 Chinatown in Incheon, since 1883 where 2nd and 3rd generation Chinese Koreans live 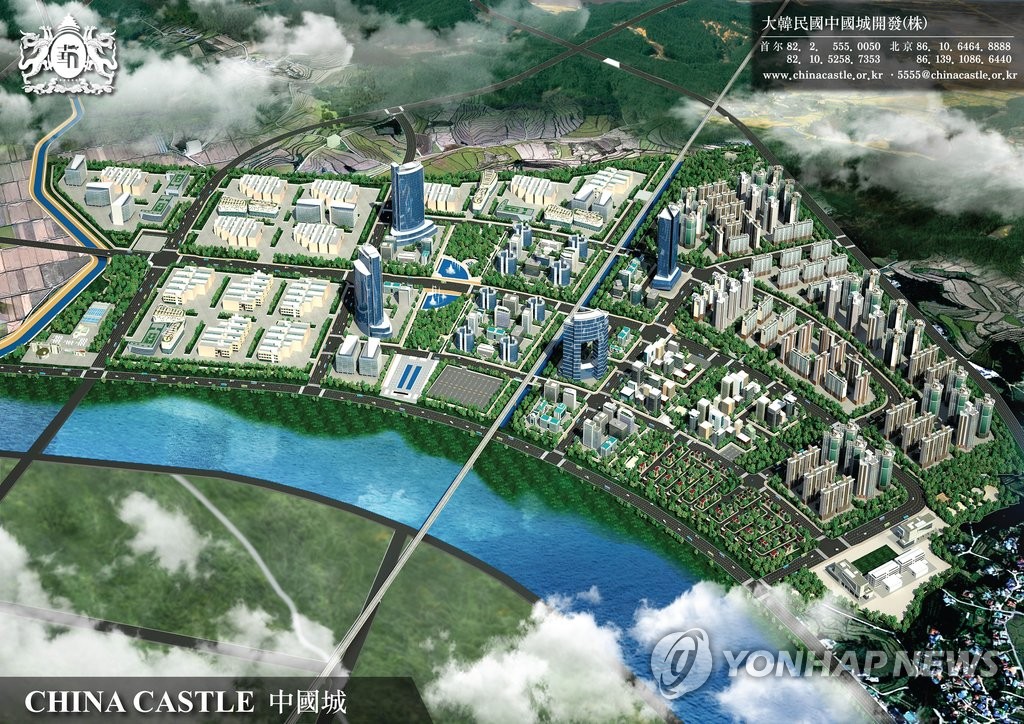