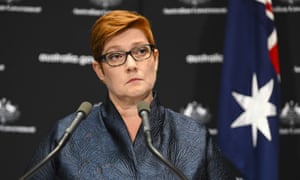 Australian foreign minister Marise Payne has put down ‘any suggestion that economic coercion is an appropriate response’ to Australia’s call for an investigations into the origins of coronavirus, which China opposes. Photograph: Lukas Coch/AAPAustralia has been described as “gum stuck to the bottom of China’s shoe,” by a Chinese state media editor as Beijing criticised calls for an inquiry into the coronavirus origin as “political manoeuvring,” further straining ties.

Australia has emerged as one of the most vocal critics of Beijing as it calls for an investigation into the origins and spread of the virus, which emerged in China late last year and has now killed more than 200,000 people around the world.

Late on Monday, Hu Xijin, the editor of the state-run Global Times wrote on Weibo that ties between Australia and its largest trading partner, China, were likely to deteriorate as much as relations between Beijing and Washington had.

Criticising Australia for joining the US in its attacks on China, Hu wrote: “After the epidemic, we need to have more risk awareness when doing business with Australia and also when we send our children to study there.”

“Australia is always there, making trouble. It is a bit like chewing gum stuck on the sole of China’s shoes. Sometimes you have to find a stone to rub it off,” Hu said.

Hu’s comments echo that of China’s ambassador to Australia, Jingye Cheng, who told Australian media at the weekend that pushing for an inquiry could result in a boycott of the country’s goods. “Maybe the ordinary people will say ‘Why should we drink Australian wine? Eat Australian beef?’,” Cheng told the Australian Financial Review.

At a briefing on Monday, a spokesman for China’s ministry of foreign affairs, Geng Shuang, described international calls for an inquiry as destined to fail. Without naming Australia specifically, he said: “Some politicians are trying to make political manoeuvres over the origin to smear other countries, but their unpopular attempts will never succeed.”

Geng added: “The urgent task for all countries is focusing on international cooperation rather than pointing fingers, demanding accountability and other non-constructive approaches.”

The origin of the coronavirus has become an increasingly fraught topic as Beijing fights off accusations it is to blame for the pandemic. China has pushed the idea that the virus, first detected in the central Chinese city of Wuhan, may have originated elsewhere, while the US claims it could have leaked from a Chinese lab. In China, all research into the origins of the virus must go through prior vetting as part of a new policy, according to notices seen by the Guardian.

The Chinese embassy in Canberra has responded to reports about the Department of Foreign Affairs and Trade raising the investigation of the source of Covid-19 with the ambassador, releasing a statement claiming DFAT has conceded it has no detail on the proposed investigation.

The statement confirmed ambassador Cheng Jingye took a phone call from Dfat secretary Frances Adamson, but said media reports about what was said were incorrect.

“Secretary Adamson tried her best to defend Australia’s proposal about the independent review, saying the proposal neither has political motive nor targets China. She also admitted it is not the time to commence the review now and Australia has no details of the proposal. She further said that Australia does not want the matter to have any impact on Australia-China relationship.

“Ambassador Cheng elaborated clearly China’s relevant position, stressing that no matter what excuses the Australian side has made, the fact can not be buried that the proposal is a political manoeuvre.

“Ambassador Cheng flatly rejected the concern expressed from the Australian side over his remarks during the recent AFR interview, and called on Australia to put aside ideological bias, stop political games and do more thing to promote the bilateral relations.”

The foreign minister, Marise Payne, on Monday put down “any suggestion that economic coercion is an appropriate response to a call for such an assessment”.

The prime minister, Scott Morrison, has called on member nations of the World Health Organization to support an independent inquiry into the origins and spread of the coronavirus. He has said his country will push for an international investigation at the WHO assembly on 17 May.

← Zoom Or Not? NSA Offers Guidance For Choosing A Videochat App
Why The U.S. Withdrew Its Bombers From Guam →