On May 4, 2020, the blockchain surveillance firm Chainalysis published a three-part series covering a crypto Ponzi scheme, North Korea, and Iran’s use of digital currencies like bitcoin. The company’s research papers discuss the Poland-based crypto Ponzi called Futurenet, a hosting service allegedly tied to North Korea, and how Iran-based exchanges are bypassing OFAC sanctions through the use of digital currencies.

This week Chainalysis published some findings on cryptocurrency usage in Iran, North Korea, and a Ponzi scheme called Futurenet. Mainstream media has been watching North Korea closely, as the country’s supreme leader Kim Jong-un has recently been rumored to have passed away. Other rumors say Jong-un “vanished” because of the coronavirus outbreak. Not too long ago a United Nations report estimated that North Korea (NK) has stockpiled at least $670 million worth of cryptocurrencies like BTC.

The Chainalysis’ NK briefing highlights how an alleged anonymity host provider from Switzerland called Black Host has been accepting digital assets for goods and services. Black Host claims to offer anonymous email services, virtual private networks (VPN), and even SIM cards. Despite the fact that many people think Black Host is not doing anything wrong, Chainalysis believes the Black Host platform is connected with the criminal masterminds called the Lazarus Group. According to a myriad of reports, the Lazarus Group is North Korea’s cyber and crypto crime syndicate.

North Korea is an OFAC sanctioned country, but not the only country accused of leveraging digital currencies to avoid sanctions. The second report published by the blockchain analysis firm, discusses the situation in Iran as far as cryptocurrencies are concerned. “Iran’s Central Bank [is] voicing its intention to pursue cryptocurrency projects aimed at getting around sanctions, many exchanges such as Localbitcoins have stopped offering service to Iranian users to limit their exposure to possible sanction violations,” Chainalysis notes. 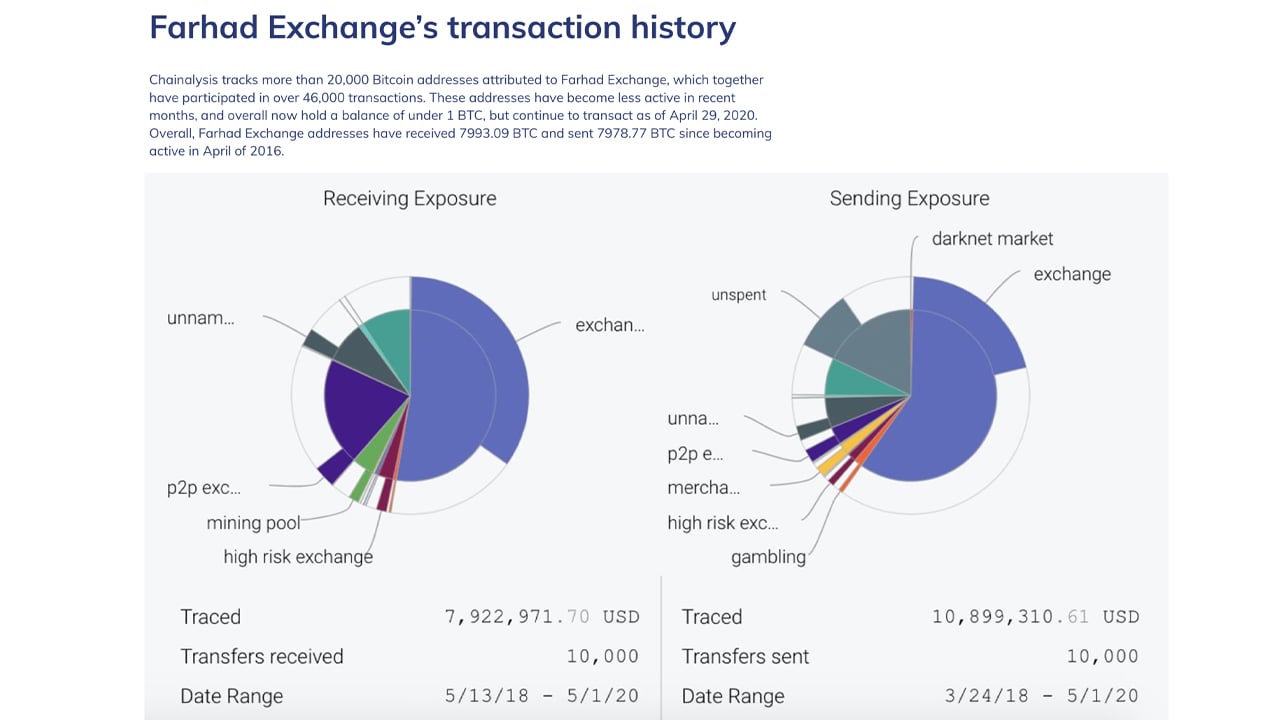 The blockchain intelligence company provides a comprehensive overview of the Iranian crypto trading platform called the Farhad Exchange. “While Iran is cut off from many international exchanges, local exchanges continue to operate in the country, drawing scrutiny from U.S. and international regulators. For this reason, it’s crucial to understand how Iranian exchanges interact with the international cryptocurrency ecosystem, and especially their exposure to regulated exchanges,” the study’s introduction explains. The final report from Chainalysis discusses the Futurenet Ponzi scheme, a project that was initiated in Poland. Chainalysis calls Futurenet a “cryptocurrency scam with purpose-built payment processors.” “At first glance, Futurenet appears no different from any other cryptocurrency-based Ponzi scheme. Victims pay into the scam based on promises of large returns, and are told they can make even more money by recruiting their friends as well,” the company’s report reveals. The Chainalysis briefing on Futurenet adds:

Upon further investigation, Futurenet appears to have its own infrastructure of purpose-built shell companies to facilitate cryptocurrency payments to and from victims.

The three briefings give a comprehensive perspective of these subjects and how the operations work. The briefings also contain the company’s Reactor graphs that are tethered to each investigation.

What do you think about the three topics researched by Chainalysis? Let us know in the comments below.

Disclaimer: This article is for informational purposes only. It is not a direct offer or solicitation of an offer to buy or sell, or a recommendation or endorsement of any products, services, or companies. Bitcoin.com does not provide investment, tax, legal, or accounting advice. Neither the company nor the author is responsible, directly or indirectly, for any damage or loss caused or alleged to be caused by or in connection with the use of or reliance on any content, goods or services mentioned in this article.

← Sources: U.S. Investigating Ex-Green Beret For Venezuela Raid
The Invasion Of Venezuela, Brought To You By Silvercorp USA →