Mike Pompeo: U.S. Will Get Back Any Americans Seized By Venezuelan Forces

Mike Pompeo: U.S. will get back any Americans seized by Venezuelan forces 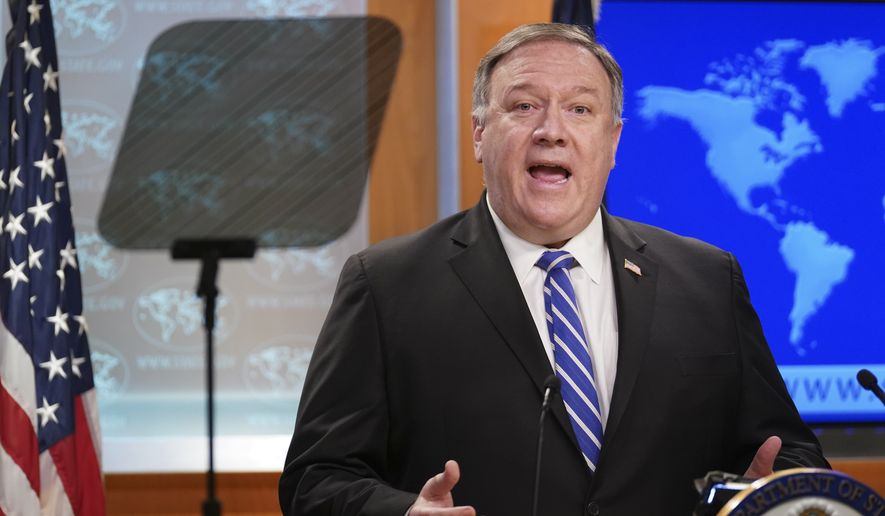 Secretary of State Mike Pompeo speaks a news conference at the State Department in Washington on Wednesday, May 6, 2020. (Kevin Lamarque/Pool Photo via AP) more >

Secretary of State Mike Pompeo vowed Wednesday to “use every tool available” to secure the release of two American military veterans that Venezuela claims took part in a botched coup attempt over the weekend, but repeated U.S. denials that Washington knew of or supported the plan.

But questions about the still-murky incident only deepened Wednesday as state television in Venezuela broadcast a video of one of the American captives, identified as former Special Forces fighter Luke Denman, saying he was part of a mission organized by a Florida private security firm to remove socialist Venezuelan President Nicholas Maduro from power.

Mr. Maduro, who has exploited the plot’s failure as a propaganda coup, brandished the blue American passports found on the two U.S. captives. The others involved in a pair of ill-fated amphibious assaults over the weekend were believed to be former Venezuelan military members living in Colombia.

Mr. Pompeo echoed earlier assertions by President Trump and other administration officials that the U.S. had no “direct involvement” in the midnight raid. He told reporters at the State Department that, while U.S. officials have not confirmed that U.S. citizens were actually being detained by Caracas, “any time there are Americans that are detained someplace, we’ll work to get them back.”

Mr. Maduro and his aides said they had little doubt who was behind the incident. The Trump administration has openly supported efforts to remove the socialist president and had endorsed opposition leader Juan Guaido as Venezuela’s “interim president.”

“Donald Trump is the direct chief of this invasion,” the Venezuelan president said in a televised virtual press conference Wednesday, according to Reuters,
Venezuelan authorities claim Mr. Denman was arrested along with a fellow former U.S. Special Forces fighter, Airan Berry, during the botched beach landing about 20 miles from Caracas.

Jordan Goudreau, a former Green Beret and now the owner of a Melbourne, Fla.-based private security firm, told The Associated Press earlier in the week that he had worked with two American men in a mission that was launched before dawn Sunday to “liberate” Venezuela. Mr. Goudreau said Mr. Denman and Mr. Berry had once served with him in Iraq and that he had received no aid or support from Washington or from Venezuela’s opposition.

Eight people reportedly were killed on a beach near the port city of La Guaira in a second, coordinated landing.

President Trump has overseen a series of increasingly harsh sanctions targeting the faltering Venezuelan economy and top officials of the Maduro government.

He has said repeatedly in the past that “all options are on the table” in dealing with the regime.

But both Mr. Trump and Defense Secretary Mark Esper this week insisted they knew nothing of the weekend incident.

Mr. Guaido, whose campaign to oust Mr. Maduro has stalled in recent months, told reporters in Venezuela he also had “no relationship nor responsibility for any actions” taken by Mr. Goudreau — despite claims by the former Green Beret that Mr. Guaido had hired his private security company to engage in unspecified “services.”

An AP investigative report has separately claimed Mr. Goudreau worked closely with retired Venezuelan Gen. Cliver Alcala, an organizer of Venezuelan military deserters who handed himself over to U.S. authorities in late March after being indicted on drug trafficking charges. At one point Wednesday, Mr. Pompeo appeared to try and make light of the Venezuela allegations, saying, “If we’d have been involved, it would have gone differently.”