If Hong Kong falls, the long arm of the Chinese Communist Party will expand further. 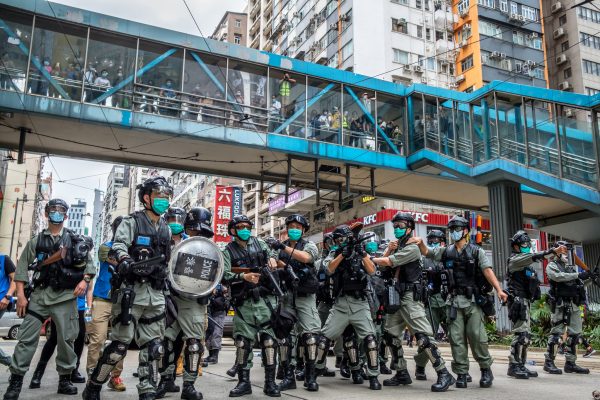 AdvertisementChina’s decision to introduce a national security law into Hong Kong through the National People’s Congress is like dropping nuclear bomb on the territory. Seemingly, it is a step that serves no one’s interest, including the Chinese Communist Party (CCP) itself.

For Hong Kong as a whole, the move delivers a death blow to its century-long status as a separate legal jurisdiction, which is the very foundation of its economic success, freedom, and human rights. It sends a chill to Hong Kong’s democracy camp, as they will come under the heel of greater authoritarian suppression. It’s also bad news for the establishment, as China’s decision to bypass the Hong Kong legislative process is a vote of no-confidence in the previous model of indirect rule. In the future, the local elites, including the chief executive, will find themselves increasingly sidelined under a new direct-rule approach from the center.

For the West, this step rings the death knell for their presence in Hong Kong. Western companies are going to lose the only Western-oriented business center within Chinese territories and their business interests will no longer be well protected by the British-style common law jurisdiction. U.S. business interests in Hong Kong – which include 1,300 companies and $82.5 billion in direct investment — have now been put at risk by China’s long arm. Apart from the economic presence, the extensive presence of the West in Hong Kong in terms of international nongovernment organizations (INGOs), media branches, and intelligence operations are also at risk of being uprooted by China’s heavy hand. The West, particularly the United States, may forever lose its foothold in the door of China.

For China itself, this step also carries significant financial and economic risks. Hong Kong is China’s “financial lifeline,” functioning as its single most important source of foreign capital since the founding of the People’s Republic. These days, Hong Kong’s financial function to China has become more important than ever, as Chinese companies are already on the brink of being expelled from the U.S. capital market and dozens of Chinese companies have been forced to plan secondary listings in Hong Kong. Therefore China’s push for a national security law in Hong Kong will only burn its own bridge to the world and add pressure to the vulnerable Chinese economy, which is already in the most severe state of recession since the 1990s. Of course, it is an open secret that the extension of China’s long arm to Hong Kong will put an end to its infamous role as an offshore safe haven for mainland power elites to hide their private assets.

Because it is a step that seemingly serves no one’s interests, China’s announcement of the national security law has sent shockwaves through both Hong Kong and the international community.

It is difficult to open the black box of China’s decision-making process, but one logical explanation for such a lose-lose decision is that it fits with the Chinese nationalist agenda of the Xi Jinping regime. Facing unprecedented challenges at home and abroad — ranging from a faltering domestic economy and growing pressure for “internal stability preservation” to the global trend of economic decoupling, a worldwide backlash against the spread of COVID-19 from Wuhan, and rising geopolitical pressure from the U.S. — it is comprehensible that the Xi regime would choose to shift the blame to “foreign forces” by playing up its Chinese nationalist card.

For this purpose, Hong Kong’s pro-Western orientation, its people’s strong desire for greater autonomy, and its extensive connections with the West have set the perfect scene for the Xi regime to flex the Chinese nationalist muscle. To this end, Xi seems to have prioritized the nationalist fervor to control Hong Kong over utilitarian calculations of the territory’s financial contribution. Xi’s nationalist agenda becomes more obvious if we put Hong Kong’s national security law in a wider context together with China’s tougher tack toward Taiwan and aggressive increase in military spending, as simultaneously announced in the latest PRC State Council annual work report.

Whatever the calculations being made by the Xi regime, the fact is that China has decided to make Hong Kong its battlefield with the West. This signals a fundamental change of China’s policy toward Hong Kong. Since 1949, the party-state has all along exercised a high degree of tolerance toward the foreign presence in Hong Kong, in the name of “long-term planning, full utilization” (under the Mao Zedong regime) and “one country two systems” (from the Deng Xiaoping to Jiang Zemin and Hu Jintao regimes). In exchange, China gained privileged access to foreign capital and international trade through the territory. By placing pragmatism over nationalist fervor, China provided the room for Hong Kong to function as a geopolitical buffer zone from the Cold War to the post-Cold War period.

AdvertisementBut now the countdown to the end of Hong Kong as the world knows it has begun. By deviating from the CCP’s longstanding utilitarian approach toward Hong Kong, the Xi regime seems to have no interest in keeping Hong Kong as its buffer zone with the West. Driven by a nationalist political agenda, Xi instead sees Hong Kong as the frontline battlefield in the new Cold War with the United States.

Now Pandora’s box has been opened. The decision to push for a national security law, bypassing the local legislative process entirely, will entangle Hong Kong, China, and the West in a vicious cycle.

Immediately, turmoil at local level is almost certain. The democracy camp will certainly resist the national security law and the “paramilitary police-state,” backed by the Hong Kong government and Beijing, will respond with more aggressive oppression. New waves of street fights will happen from now on all the way through the anniversaries of key dates of the “2019 Water Revolution,” such as the June 12 resistance and August 31 attacks. The extensive disqualification of democratic candidates in September’s Legislative Council election looks inevitable; the election itself may be postponed. A local financial crisis is also looming as a consequence of the massive outflow of local, mainland, and foreign capital from Hong Kong and expectations of the partial (if not complete) revocation of Hong Kong’s special treatment by the United States.

The most worrying scenario would be the fanning of aggressive Chinese nationalism into wider geopolitical conflicts. History tells us that nationalist ambition, once mobilized, will likely develop into ever-more aggressive territorial claims. If the Xi regime can successfully impose direct rule over Hong Kong and weather the backlash, including possible sanctions from the United States, the Chinese nationalist fervor will be emboldened, renewing ambitions for extending its reach into other peripheries, particularly Taiwan and the South China Sea. A war between China and the United States is no longer unimaginable.

Get first-read access to major articles yet to be released, as well as links to thought-provoking commentaries and in-depth articles from our Asia-Pacific correspondents.

History will not simply repeat itself, but similar events have taken place in the past. In 1946, the Far East Committee of the British government justified its decision to retain its hold on Hong Kong as follows:

The problem of Hong Kong must be considered against the background of China’s policy of nationalism and racial expansion throughout Asia. It is arguable that any concession in Hong Kong, far from ‘appeasing’ Chinese imperialism, would be regarded as a sign of weakness and would be followed in due course by renewed agitation for the retrocession of the whole of Hong Kong, and that a concession in regard to Hong Kong could hardly fail to stimulate agitation in regard to Chinese claims and ambitions in South East Asia generally… (Foreign Office, 1946, CO 537/1656)

Hong Kong is geographically tiny, but it is geopolitically too important to ignore. The fight for Hong Kong will be a decisive fight for the liberal world order at large. Thus there is a lot riding on the response of the United States and its allies to the current crisis in Hong Kong.

This article is part of the HongKongBrief, a monthly e-newsletter on the state of Hong Kong’s autonomy. You can subscribe here.

Brian C.H. Fong is a comparative political scientist based in Hong Kong. He is a public intellectual, founding and leading several civil society organizations in Hong Kong including serving as the Secretary-General of Network DIPLO. Follow: @brianfonghk