By Air And Sea, Mercenaries Landed In Libya. Then The Plan Went South.

By Air and Sea, Mercenaries Landed in Libya. Then the Plan Went South.

A short-lived mission uncovered by U.N. investigators offers a glimpse into the world of those who have thrived off Libya’s chaos. 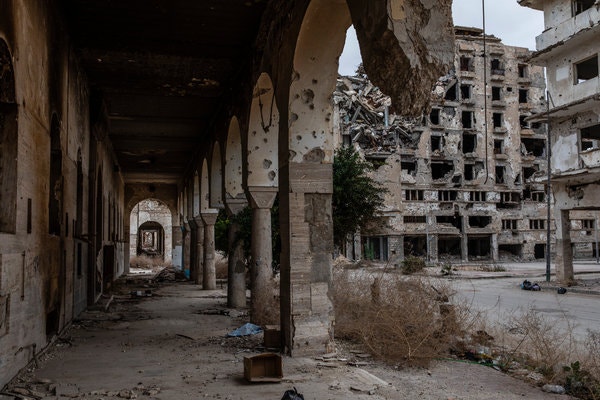 Years of conflict have left the center of Benghazi in ruins. In June, mercenaries slipped into its port prepared for more battle.Credit…Ivor Prickett for The New York Times 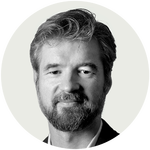 CAIRO — Two former British marines piloted their boats, a pair of military-grade inflatables, across the Mediterranean from Malta. Six helicopters were flown in from Botswana using falsified papers. The rest of the team — soldiers of fortune from South Africa, Britain, Australia and the United States — arrived from a staging area in Jordan.

To anyone who asked, the mercenaries who slipped into the war-pocked port of Benghazi, Libya, last summer said they had come to guard oil and gas facilities.

In fact, United Nations investigators later determined, their mission was to fight alongside the Libyan commander Khalifa Hifter in his all-out assault on the capital, Tripoli, for which they were to be paid $80 million.

It quickly went wrong. A dispute erupted with Mr. Hifter, a notoriously mercurial leader, over the quality of the aircraft. On July 2, after just four days in Libya, the mercenaries scrambled for their speedboats and roared out to sea, headed for the safety of Malta.

Although short-lived, the botched mission offers a telling illustration of the melee in Libya, where a war driven by powerful foreign sponsors — principally the United Arab Emirates, Turkey, Russia and Egypt — has created a lucrative playground for smugglers, arms dealers, mercenaries and other profiteers who flout an international arms embargo with little fear of consequences. 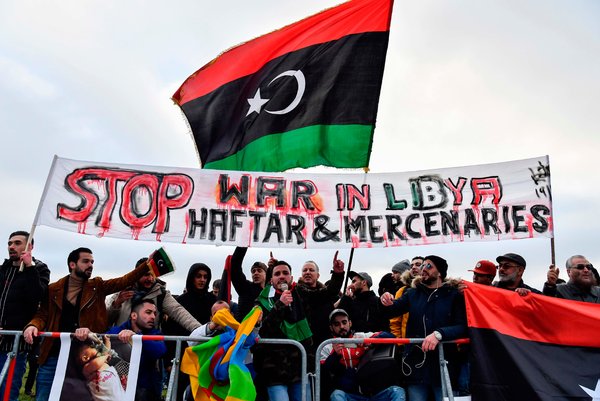 Protesters in Berlin in January calling for an end to the conflict in Libya.

Libya is a singular magnet for its combination of oil wealth and scrappy standards of combat. With Russian, Syrian, Sudanese, Chadian and now Western mercenaries drawn to the fight, it has the rare distinction of being a mercenary-on-mercenary war — sometimes, in the case of Syrians, with men from the same country fighting each other.

“It’s a free-for-all,” said Wolfram Lacher, a Libya expert at the German Institute for International and Security Affairs. “Everyone is bringing ever more absurd types of weapons and fighters into Libya, with Syrians on both sides, and nobody is stopping them.”

Libya, a sparsely populated oil-rich nation, has been mired in chaos since the ouster of its decades-long dictator, Col. Muammar el-Qaddafi, by an American-backed coalition in 2011. Peace talks established a fragile United Nations-backed government in Tripoli that Mr. Hifter aims to overthrow.

Since his first offensive in 2014, Mr. Hifter has been backed by an array of foreign forces. In the past year, a powerful Kremlin-backed private army, the Wagner Group, turbocharged his flagging assault on Tripoli. But Turkey joined the fight on behalf of Tripoli in January and has thrown Mr. Hifter’s campaign into disarray.

A large contingent of Russian fighters and their weapons retreated from the front lines south of the capital over the weekend and were flown in three planes to a Hifter stronghold, Reuters reported. Mr. Hifter’s powerful foreign sponsors will likely determine his next move.

The abortive mercenary expedition last summer was organized and financed by a network of secretive companies in the United Arab Emirates, according to a confidential report submitted to the United Nations Security Council in February. The companies are controlled or part-owned by Christiaan Durrant, an Australian businessman and former fighter pilot who is a close associate of Erik Prince, America’s most famous mercenary entrepreneur. 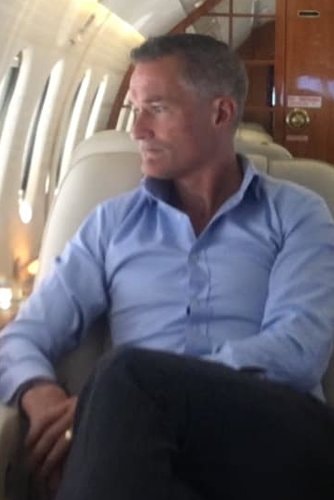 Christiaan Durrant in a photograph taken from social media.

Mr. Prince, whose close ties to the Trump administration have come under Congressional scrutiny in recent years, has provided private militia forces for Crown Prince Mohammed bin Zayed, the de facto ruler of the United Arab Emirates and the leading foreign sponsor of Mr. Hifter’s war in Libya.

United Nations investigators are examining whether Mr. Prince played any role in the failed mercenary operation. Through a spokesman, Mr. Prince said he had “nothing whatsoever to do with any alleged private military operation in Libya.”

“Libya is a case study of the changing character of war,” said Sean McFate, a former private military contractor and senior fellow at the Atlantic Council. “We think of war as a political activity, but in Libya it’s becoming a commercial one. You have these for-profit warriors of every stripe going in there, waging the kind of wars that Machiavelli discussed in the 16th century.”

The team of 20 mercenaries that deployed to Benghazi in June was led by Steve Lodge, a former South African Air Force officer who also served in the British military and worked as a private military contractor in Nigeria.

The others were also ex-military — 11 South Africans, five Britons, two Australians and one American, a trained pilot. Their mission was to prevent shipments of Turkish-supplied weapons from reaching the government in Tripoli by sea.

The plan, United Nations investigators say, was to create a marine strike force using speedboats and attack helicopters that would board and search merchant ships. Investigators believe the marine force was part of a larger operation that also involved commandos who would surveil and destroy enemy targets.

Three officials familiar with the United Nations investigation, which was first reported by Bloomberg, briefed The New York Times on its contents and provided copies of documents. They spoke on the condition of anonymity because they were not authorized to talk to the media.

Six helicopters were bought in South Africa and trucked to the international airport in Gaborone, Botswana. Though clandestine, the operation left behind a long trail of evidence, starting with photographs published online by The Botswana Gazette of three Super Puma helicopters, strapped to trucks, being driven down a highway.

The helicopters were loaded into cargo planes, one of which was owned by SkyAviaTrans, a Ukrainian company whose motto, borrowed from a Vietnam-era C.I.A. airline, is “Anything, Anytime, Anywhere, Professionally.” The airline was cited last year in a United Nations report for transporting military items into Libya.

Flight documents listed the planes’ destination as Jordan but they landed at Benghazi airport, near Mr. Hifter’s headquarters in eastern Libya. 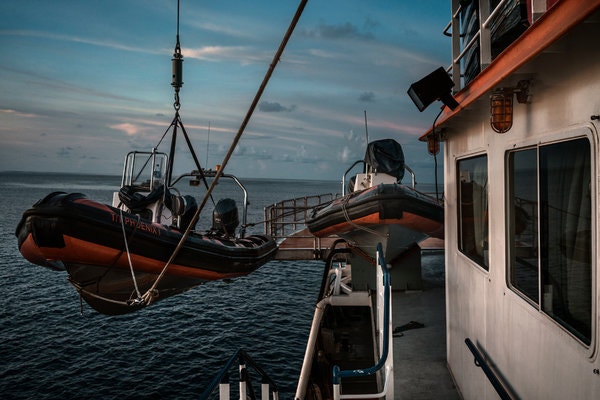 Inflatable boats similar to the ones the mercenaries used to land on the Libyan coast.Credit…Adam Dean for The New York Times

Mr. Lodge, the commander, negotiated the deals, but they were contracted and paid for by several Dubai-based companies controlled or part-owned by Mr. Durrant.

One of the companies, Lancaster 6, is part of a network of similarly-named companies in Malta, the Emirates and the British Virgin Islands. “Prosperity breeds peace,” reads its website.

Another, Opus Capital Asset, is run by Amanda Kate Perry, a prominent British businesswoman in Dubai who promotes women entrepreneurs and was hailed by a local magazine, Emirates Woman, as one of its 2019 “visionaries.”

Reached by phone, Mr. Lodge, who has an address in Scotland, used an expletive to dismiss the accusations of violating the arms embargo, then hung up. Ms. Perry, reached by phone, declined to comment.

A spokeswoman for Mr. Durrant dismissed the United Nations findings about the Libya mission as “simply not factual and misinformed,” and did not respond to further questions.

The Plan Hits a Snag

In Benghazi, Mr. Hifter was infuriated that the mercenaries had brought old aircraft — one official called them “clapped-out helicopters” — instead of the more powerful craft they had promised. A document obtained by the United Nations indicated that the promised aircraft included a Cobra attack helicopter and a LASA T-Bird, a crop duster adapted for reconnaissance and warfare.

Unable to come to terms with the Libyan commander, the mercenaries decided to pull back to Malta. But after leaving Benghazi on the night of July 2, one of their boats ran into trouble and had to be abandoned. All 20 men crammed onto a single boat and continued to Malta.

Weeks later, the abandoned boat was found by the Libyan Coast Guard and photographs of it appeared in local news media.

On his website, Mr. Durrant presents himself as an entrepreneur and a humanitarian worker, with a photo showing him holding a Kenyan baby. “To save succeeding generations from the scourge of war,” reads one blog post. 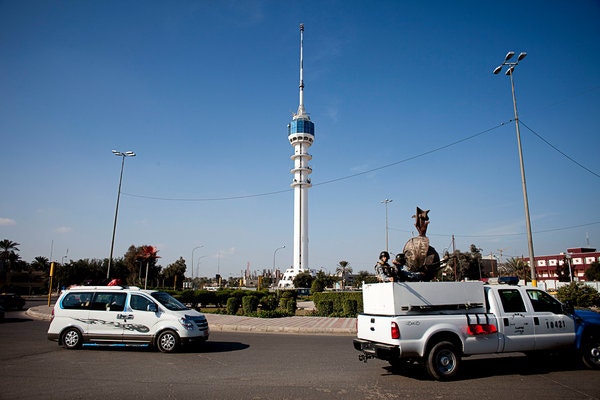 Nisour Square in Baghdad, Iraq, the scene of the shooting carried out by Blackwater contractors in which 17 Iraqis were killed.Credit…Eros Hoagland for The New York Times

From 2014 to 2016, Mr. Durrant worked under Mr. Prince at a company called Frontier Services Group, where he led a contentious project to convert Thrush crop duster airplanes into cheap warplanes. The project was later transferred to a Bulgarian company linked to Mr. Prince, which called it the LASA T-Bird — the same plane promised to Mr. Hifter.

In 2017, Mr. Durrant was linked to Mr. Prince’s proposal for a private air force to fight the Taliban in Afghanistan when Mr. Prince listed Lancaster 6 as a partner company in a submission to the Defense Department, The Military Times reported.

Mr. Durrant likes to flaunt his familiarity with Washington. His Facebook profile photo shows him wearing sunglasses at the podium of the press room at the Pentagon. An avid sailor, he co-owns a trimaran yacht with Mr. Prince, and last month posted photos of a catamaran emblazoned with the Blackwater logo on sale for $25,000. The same craft has been registered in Mr. Prince’s name.

Last July, as the mercenary operation in Libya was underway, Opus Capital, the Emirati firm, paid at least $60,000 to the Washington lobbyists Federal Associates to pitch the White House on what it called “geopolitical issues in Africa.”

Both Opus Capital and Lancaster 6 were cooperating with the United Nations investigators and had offered to meet them, said the spokeswoman for Mr. Durrant.

Mr. Prince had no role in the companies, she said. “He is not a shareholder, director or working in either company,” she said.

‘Joke’ of an Embargo

The international arms embargo on Libya is notoriously toothless. Anyone violating it faces a possible travel ban and an asset freeze yet only two non-Libyan nationals, both Eritrean people smugglers, have ever been sanctioned. Even senior United Nations officials call the embargo “a joke.”

Big powers cannot agree on who should be sanctioned, either because they are openly at odds over Libya, or, like the United States, have vacillating and contradictory policies.

Khalifa Hifter, the military commander, on a billboard in Benghazi.Credit…Ivor Prickett for The New York Times

The investigation into the mercenary operation is continuing. Officials say there is enough evidence already against some individuals to warrant sanctions.

But so far the only legal action has come from Malta, where the police last month charged the arms dealer, Mr. Fenech, and four of his employees with violating European Union sanctions for supplying the mercenaries with speedboats.

Mr. Fenech denied any wrongdoing. “We have just chartered 2 vessels on a bare boat agreement and have found ourselves in a very unbelievable situation,” he said in an email.

Mr. Fenech also has business ties with Mr. Prince. In 2018 they launched Blackwater Ammunition, which sells ammunition for assault rifles, knives and watches under the Blackwater brand.

Libya’s chaotic war is so freewheeling that some profiteers have even managed to work both sides of the front line. But it can be risky.

On Aug. 5, a drone operated by Mr. Hifter’s forces bombed a cargo plane on the runway at Misurata, in government-held territory. It was the same SkyAviaTrans cargo plane that had delivered a helicopter to Mr. Hifter a month earlier.

This time, officials said, it was carrying military supplies to Tripoli.