China Will Use Its Digital Currency To Compete With The USD

China Will Use Its Digital Currency To Compete With The USD 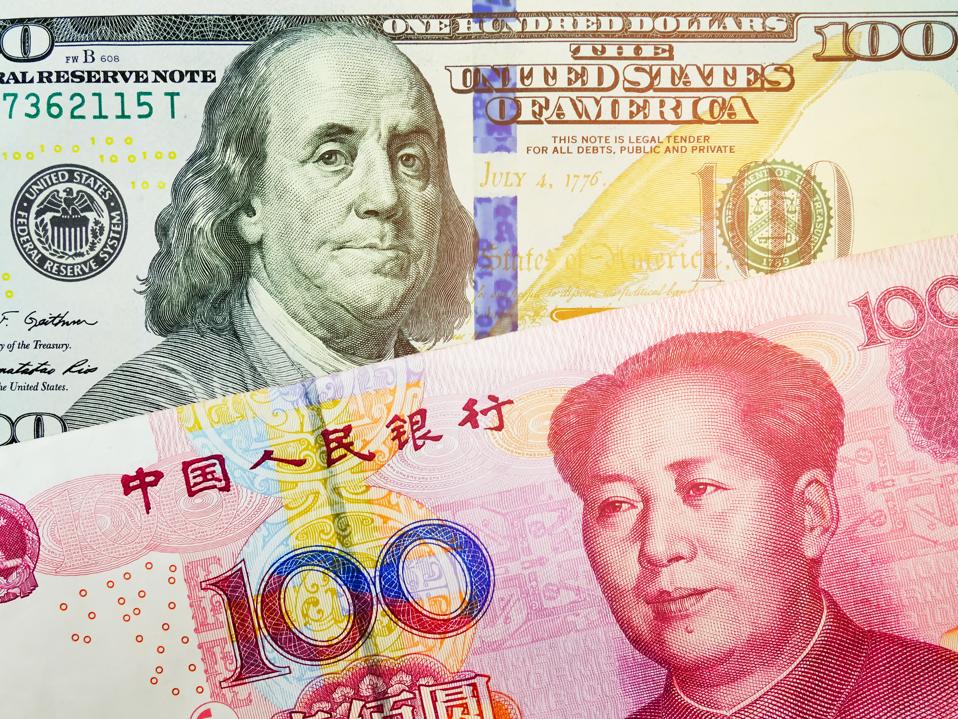 Close up view of US Dollar and Chinese yuan bills. currency exchange rate.

GettyAmid questions and speculation about China’s new central bank-backed digital currency termed DCEP, one thing remains clear: to the extent that China is working on digital currency, the main benefits would be to replace fiat cash with a layer of traceable digital cash, ingesting another layer of data into the fearsome data machine that powers both government monitoring and the domestic machine learning industry — as well as providing enough “credible” decentralization so that the RMB could continue a digital ascent to greater internationalization and perhaps challenge the USD’s position as the premier reserve currency of the world.

This is a trend cryptocurrency holders and adherents must track: any potential ascent of a Chinese digital currency that “smells” like cryptocurrency may initially excite institutional investors and retail investors not deeply invested into the tenets of cryptocurrencies but rather their return on investment — however, inevitably, a digital RMB will compete for oxygen with cryptocurrencies as they both seek to ascend and disrupt certain parts of the existing financial consensus. This will invite scrutiny from competitor states as well as allied states who may want to embrace this new model.

Since the late 2000s, China has tried to accelerate internationalization of its domestic RMB with policy measures such as dim sum bonds. Dim sum bonds are bonds issued in foreign countries but denominated by Chinese currency amounts: they were taken out by companies such as McDonalds MCD . China has also tried to extend currency swap to a variety of nations, and had more integrated RMB settlement projects with Hong Kong, Macau and the Southeastern Asian association of economies known as ASEAN. However, these can be seen as the precursor to the next steps of moves the Chinese state is lining up to take: positioning the RMB as a premier reserve currency for the world.

Reserve currency has a very specific connotation as a fiat currency held in significant reserves by multilateral organizations and foreign central banks. It was the United Kingdom’s pound that was the unquestioned premier reserve currency of the 19th century — at the peak of the British Empire, it was the lifeblood of international commerce and a stabilizing as well as powerful factor for the ascent and maintenance of the British Empire.

Nowadays, this role is unquestionably played by the US dollar, though as an unipolar world blends more into a multipolar ones, other currencies play a role — though as not as the first among many. It’s commonly established that the current reserve currencies of the world are the Japanese Yen, the Euro, the Chinese Yuan and first among equals, the United States Dollars.

China is certainly seeking to augment the role of the Chinese Yuan in this regard, and this can be seen in its actions from having the IMF approve the drawing of the Chinese Yuan as a significant component of its special drawing rights currency basket to the Beijing-sponsored creation of the Asian Infrastructure Investment Bank (AIIB), largely seen as a potential competitor to the IMF and World Bank.

It’s perhaps this trend that has led many thinkers on the topic, including ex-secretary of the Treasury Henry M. Paulson Jr., to opine on the position that China’s digital currency poses no more of a threat to the US-based financial system than the RMB itself. The fundamentals of reserve currencies will be dictated by political systems and their relative openness, and financial fundamentals such as the demand for a particular currency as a virtue of the function of the economy that depends on it. To the extent that the RMB will displace the USD, it will have little to do with the form of China’s currency but rather with its economic and political choices.

The argument has its merits but it needs to be nuanced, and it glosses over key strategic insights as to why a digital currency version of the RMB makes for better long-term adoption and gives China more ability challenge the USD as the premier reserve currency independent of fundamental factors tied to the economy at large.

1) A digital version of the RMB lets China interoperate between different currency contexts where the USD may start to fade.

For example, central banks that don’t have established swap lines with the Federal Reserve for USD during this COVID crisis may see a spate of debt demand for USD within each of their markets, heightening the value of the USD in the short-term, but probably determining a long-term reckoning on US-dollar denominated debts, while adoption of Chinese tech standards and the ubiquity of mobile payments with the widescale adoption of solutions like M-Pesa, and the creeping growth of AliPay in Africa help heighten the perceived value of the RMB in international contexts.

Various central banks in Africa are straining to prove their credibility after years of inflation and currency devaluation. The Nigerian central banks’ governor is imploring citizens in Nigeria to avoid forex black markets after a shortage of US dollars and a collapse in the price of the domestic naira.

Across the African continent, inflation has been at all-time highs, especially relative to most polities where recorded inflation is low. A digital currency that can interoperate between different African systems or other Belt and Road Initiative Partners as well as what may be their largest trading partner, China, backed by some government force, may be able to sweep the area as people question the value of holding US dollar debts amid collapsing domestic currencies.

2) China is in a technological battle to define standards with emerging technologies: this has been a primal focus of the Chinese state. The amount of state-enforced patents and control of 5G technologies by Huawei can be seen as an example that dovetails with an inherently mobile-friendly approach to currency exchange. Whoever defines the standard of a new technology gets outsize representation in its iterations and can shape where it goes.

A successful transnational digital currency backed by government fiat and force is something private organizations and governments around the world are liable to look at as a model and perhaps as a standard on its own — letting China define digital value for the majority of people on the world, if it were to come to pass.

3) Using digitization and decentralization to a nominal degree helps blunt China’s international weakness — perception around its totalitarian domestic system. By purporting to delegate more control to nominally private organizations as one might see China do with any “decentralized solution”, China can present a digital currency that is more acceptable to local populations than a raw form version of the Chinese RMB, which will be only tied to the Chinese state. Foreigners may not trust the Chinese state, but they may be more inclined to trust Chinese companies from ByteDance (who owns TikTok) to Alibaba BABA .

If this seems far-fetched, consider how China has advanced “One Country, Two Systems” to assuage Portugal and the United Kingdom when it came to Macau and Hong Kong — and how China has acted to float its state-controlled banks and made minor reforms in fiscal regulation partially in order to get greater financial access for its state-based organizations in the American financial system and elsewhere.

China is using the digital RMB as an important tool in its quest to ascend. Keenly aware that the American-dominated political and economic order is what underpins the “rule of law” and “international norms”, the state is looking to leverage new technologies as an asymmetric playing field where incumbency matters little — to create its own rules through standards.

This is a trend keenly worth observing, and one that again reinforces that digitization of currency is inevitable — it is whether or not it is cryptocurrency that prevails that will determine whether that will be at the hands of nation-states battling with one another, or a set of independent peers cooperating with one another.