Xi Jinping To Chinese Military: ‘It Is Necessary To Prepare For War’

Xi Jinping to Chinese Military: ‘It Is Necessary to Prepare for War’ 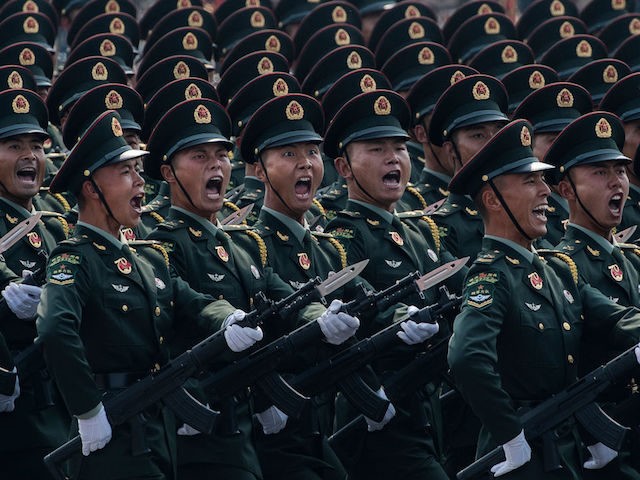 In an address to Chinese military officers at the annual meeting of the National People’s Congress (NPC), Communist China’s rubber-stamp legislature, dictator Xi Jinping said it was important to “step up preparations for armed combat” against various threats, specifically mentioning “Taiwan independence forces.”

Defense Ministry spokesman Wu Qian confirmed that Taiwan is viewed as a possible military target by the Chinese government.

“The Democratic Progressive Party authorities in Taipei are relying on external forces and going further down the path of separatism. The situation against separatism is getting grimmer,” said Wu, referring to the political party of Taiwanese President Tsai Ing-wen.

Wu defended China’s 6.6-percent increase in defense spending, even as the Chinese economy reels from the impact of the Wuhan coronavirus pandemic, as a response to growing “unilateralism” from “some countries,” by which of course he meant the United States.

Conversely, he condemned U.S. arms sales to Taiwan, which will make it much harder for China to attack the island, as “extremely wrong and very dangerous.”

Taiwan News noted that Xi’s remarks at the National People’s Congress included a “subtle warning” to India as well. The Chinese military is currently engaged in a tense standoff with Indian troops along the disputed Ladakh border, which Chinese troops have crossed several times. Fistfights and rock-throwing battles have broken out between the opposing forces.

Xi told the plenary session that China should have a “bottom-line mentality” toward its territorial claims against India and should “comprehensively strengthen the training and preparation of troops” to enforce that bottom line.

India Today worried that Xi’s threats of military aggression were more directed at India than Taiwan, even though Xi seemed more interested in Taiwan as a near-term military target.

As India Today explained at length, China has numerous small border disputes and political intrigues brewing against India, which is a far more important regional threat to Chinese ambitions than Taiwan, and Xi might see military incursions as a way of relentlessly pushing its borders outward while India hesitates to respond in a manner that could lead to full-blown warfare. China is also concerned that India will make common cause with Taiwan, having recently complained about two Indian members of parliament sending congratulatory messages to Taiwanese President Tsai on her second inauguration.

In his address to People’s Liberation Army (PLA) officers, Xi praised them for their efforts at controlling the pandemic, which he said has changed the global economic and security environment profoundly in a matter of months.

China’s state-run Xinhua news network left out Xi’s most belligerent comments in its summary of his speech, making it seem like he merely laid out a plan for recovering from the coronavirus and modernizing a peaceable military in the most efficient manner possible:

He ordered the military to think about worst-case scenarios, scale up training and battle preparedness, promptly and effectively deal with all sorts of complex situations and resolutely safeguard national sovereignty, security and development interests.

Xi demanded reform and innovation to address new situations and problems exposed in the epidemic and ordered accelerating the research and development on COVID-19 drugs and vaccines by tapping the advantages of military medical research.

Noting that this year marks the end of the 13th five-year plan for military development, Xi said extraordinary measures must be taken to overcome the impact of the epidemic to ensure major tasks on the military building are achieved.

He demanded good planning on the next five-year plan. On defense expenditure, Xi said every penny must be well spent to produce maximum results.

He also asked the military to support the economic and social development, poverty relief and others.

Australia’s ABC News noted that China’s defense increase is actually the “slowest rise in defense spending in three decades,” despite Xi’s talk of preparing for combat and remaking the PLA into a more effective high-tech fighting machine with sweeping reforms.

This Little Thing From Trump Is Driving Liberals Mad! Claimed Yours Yet?

China President Xi Jinping says his armed forces need to step up preparation and training for war as he defended an increase in military spending, while a Chinese defence spokesperson warned the nation was “facing some real threats” overseas.

On Wednesday (local time), Xi praised the army’s contribution in helping combat the coronavirus pandemic but called for armed forces to ramp up military training.

“It is necessary to explore ways of training and preparing for war because epidemic control efforts have been normalised,” he said on the sidelines of the annual meeting of the National People’s Congress, as quoted by the state-run Xinhua news agency.

“It is necessary to step up preparations for armed combat, to flexibly carry out actual combat military training, and to improve our military’s ability to perform military missions.”

View photos
Chinese soldiers march next to the entrance to the Forbidden City during the opening ceremony of the Chinese People’s Political Consultative Conference (CPPCC) in Beijing. Source: AFP via Getty

Xi ordered the military to think about “worst-case scenarios” as relations between China and the US, as well as Australia, continue to deteriorate.

While China has lashed out at nations for interference over its proposals to implement national security legislation in Hong Kong, China’s defence spokesperson said on Wednesday it was Taiwan’s reliance on “foreign forces” to further its secession from China that posed the biggest threat to national security.

“China must have a clear mind when it comes to national defence and be prepared for danger in peace time.”

China will ‘not allow’ foreign attempts to separate Taiwan

He singled out the Democratic Progressive Party in Taiwan and warned attempts to separate the island from China’s control will “bring destruction on themselves”.

In a similar message issued for Hong Kong, Wu warned that Taiwan is an “inalienable part of China” and the matter is an internal one which China will not accept any foreign interference.

View photos
Xi Jinping has told the army to prepare for military combat after praising their contribution during the coronavirus pandemic. Source: AFP via Getty

“China will not allow anyone, any organisation or any political party to separate any part of Chinese territory from the nation at any time in any way,” he said.

“[The Chinese army] has firm will, full confidence and enough capability to thwart any kind of secessionist attempt by foreign forces, and will take any necessary measures to safeguard national sovereignty and territorial integrity and maintain peace and stability across the Taiwan Straits.”

Wu’s warning was likely aimed at the US, with Secretary of State Mike Pompeo recently congratulating Taiwan President Tsai Ing-wen on her inauguration for a second term in office, while approving the sale of US$180 million worth of submarine-launched torpedoes to Taiwan.

Tsai in recent years has purchased billions of dollars worth of US arms, which Wu labelled “extremely wrong”, the South China Morning Post reported.

In recent years China has been actively seeking to expand its military capacity, and last week announced a 6.6 per cent increase to its defence budget. Its budget of US$178.2 billion ($268 billion) has roughly doubled over the last 10 years.

Yoram Evron, an expert on China’s military at the University of Haifa’s department of Asian studies, told the South China Morning Post such expenditure regardless of the current economic climate due to COVID-19 revealed Beijing’s fears of the consequences of global tensions.

View photos
Thousands of Chinese soldiers at a military rally in 2018. Source: CCTV

“China doesn’t feel safe enough – externally but maybe also internally – to slow down its military build-up, no matter what the economic circumstances are,” he said.

Relations between the US and China continue to rapidly deteriorate with an ugly back-and-forth between some of the nations key politicians showing no signs of slowing down. 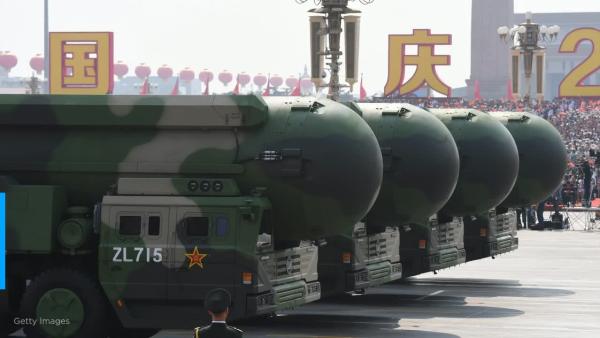 In recent weeks China and its state media has criticised Australia’s stance on matters pushed by the US, with China taking particular offence to Australia’s calls for an independent investigation into the origins of the coronavirus outbreak.

On Monday, Chinese state publication The China Daily shared a cartoon that mocked Australia as a yes-man to the US.

Do you have a story tip? Email: newsroomau@yahoonews.com.

← Sci-Fi Eye: Natural Selection On The Unmanned Battlefield
Special Operations Command Acknowledges That It Has To Change As AI Is Set To Revolutionize War →