May 29, 2020 · by Support CMShelplive · in China, Congress, Department Of Defense, military history, national security, Navy, POTUS, Senate · 1 Comment
David Maxwell Comment:  “Recall when we excited the “Asian Pivot” during the previous administration?  We provided almost no resources to do and it was really a lip serve exercise.  I think in the ned it was going to raise the apportioned force level from 50% of US military forces to 55% but as “apportioned” forces that only meant they were earmarked for the Asia-Pacific and not stationed there.   When it was the PACOM theater many used to describe the region as an economy of force theater  – make sure nothing goes wrong because all the dual apportioned forces need to be in EUCOM or CENTCOM (and the priority has obviously long been on CENTCOM).
We have done a lot in the past couple years to substantively shift focus and priorities to INDOPACOM including the development of a new strategy and plans for a Free and Open INDOPACIFC.

It is good to see Congress step in with new funding.
However, if we want to make further substantive changes and demonstrate our commitment to the region I would offer some bold or at least radical ideas.  This is from a paper I wrote to contribute to a project led by Patrick Cronin.  Link below.  The point of this is to more effectively employ our instruments national power in the region DIME-A  – diplomatic, informational, military, economic, and Alliances.”

One of the ways for the United States to look at its future in Northeast Asia is to revise its military, diplomatic, and economic structures in the region. In recent years, Washington has undertaken a pivot or rebalance to Asia, and under the current administration transformed the US Pacific Command into the US Indo-Pacific Command. The latter highlights the importance of the entire region, which has been codified in the Free and Open Indo-Pacific Strategy. However, the Asia-Pacific theater is large and complex. Perhaps it is time to reexamine the Unified Command Plan and consider reorganizing the structure and responsibilities in the theater. The United States should examine the feasibility of establishing a Northeast Asia Command as a new and separate combatant command. This is not a new idea, but it has never been sufficiently examined. Given the importance of the entire region and Northeast Asia within it, a separate combatant command with responsibility for Korea, Japan, Mongolia, Taiwan, China, and the Russian Far East would enhance US strategic capabilities. However, one argument against this idea will always come to the fore. Whenever a new set of boundaries is established, it will always create gaps and seams. This is especially true when competition with China is considered. But such a recommendation should not be discounted solely for that reason. The analysis may reveal other opportunities and, even if the proposal is not accepted, may reveal other ways to better support US strategic objectives.
While new ideas tend to focus on how to organize the military, the other instruments of power should also be considered. Perhaps it is time to think about creating a diplomatic organization in the region to coordinate all diplomatic activities and all information and influence activities to support US strategic objectives. A US Northeast Asia ambassador with the requisite supporting staff organization would provide the diplomatic and information effort necessary to synchronize the elements of national power. A third organization to support the economic instrument of power could be a Northeast Asia Economic Engagement Center. These three organizations would not only bring the strength of the US instruments of power to the region in a new and dynamic way; they would also send a powerful message of commitment, especially if they were located in the right places. The Northeast Asia Command could be located in Korea, the Northeast Asia ambassador in Japan, and the Northeast Asia Economic Engagement Center in Taiwan. Of course, this would create political challenges. However, such a proposal could also enhance the strength and power of the US alliance structure in the region and provide allies with effective tools to compete with the revisionist powers and defend against the rogue powers as outlined in the National Security Strategy and National Defense Strategy. These are merely proposals and may not be at all feasible. However, it is time to creatively reexamine employment of the instruments of power to see if the United States can be more effective in achieving its strategic objectives and maintaining and strengthening its alliances in Northeast Asia.

WASHINGTON ― As the U.S. Congress hardens against Beijing, two key lawmakers publicly added their support for a new military fund to boost deterrence against China in the Pacific, virtually assuring a Pacific Deterrence Initiative of some kind will be in the next defense policy bill.

Senate Armed Services Committee Chairman Jim Inhofe, R-Okla., and ranking member Jack Reed, D-R.I., announced their new stance in a War on the Rocks op-ed Thursday. They said their version will back investments in land-based, long-range strike capabilities, but also “theater missile defense, expeditionary airfield and port infrastructure, [and] fuel and munitions storage,” to enable new modernized platforms, rather than buying more of the platforms themselves.

“With the stakes so high, the time for action is now,” Inhofe and Reed wrote. “The Pacific Deterrence Initiative will enhance budgetary transparency and oversight, and focus resources on key military capabilities to deter China. The initiative will also reassure U.S. allies and partners, and send a strong signal to the Chinese Communist Party that the American people are committed to defending U.S. interests in the Indo-Pacific.

“The Pacific Deterrence Initiative will focus resources on these efforts and others with the aim of injecting uncertainty and risk into Beijing’s calculus, leaving just one conclusion: ‘Not today. You, militarily, cannot win it, so don’t even try it.’”

The Senate leaders follow House Armed Services Committee Chairman Adam Smith, D-Wash., and ranking member Mac Thornberry, R-Texas, in supporting the idea of a PDI. Smith has backed the idea in concept but has not publicly disclosed his priorities for the fund, while Thornberry has proposed spending $6 billion in fiscal year 2021 on priorities that include air and missile defense systems and new military construction in partner countries.

As Congress looks to replicate the multi-year European Deterrence Initiative — which consumed $22 billion since its inception after Russia invaded Ukraine and illegally annexed Crimea in 2014 — it has yet to be negotiated how much could be spent in the Pacific, what it would buy there and how long the fund would endure. Those questions will likely be part of talks within the Armed Services and Appropriations committees.

“I expect to see some new money applied to these priorities in the budget,” said Center for New American Security analyst Eric Sayers, who has advocated for the fund. “The real challenge now will be convincing the appropriators to join them and then the Pentagon building it into their 2022 budget.”

Speaking in the afternoon at a Center for Strategic and Budgetary Assessments event, Heino Klinck, deputy assistant secretary of defense for East Asia, said that he personally thinks the idea of a PDI is one that will work.

Sign up for our Early Bird Brief
Get the defense industry’s most comprehensive news and information straight to your inbox
Thanks for signing up!
For more newsletters click here

“Obviously when the National Defense Strategy came out, it very clearly stated that the priority theater is, for us, the Indo-Pacific,” Klinck said. “But all of us also recognize that strategy is budget, and budget is strategy, and the budget numbers have not supported, to date, the Indo-Pacific’s role as the primary theater.” 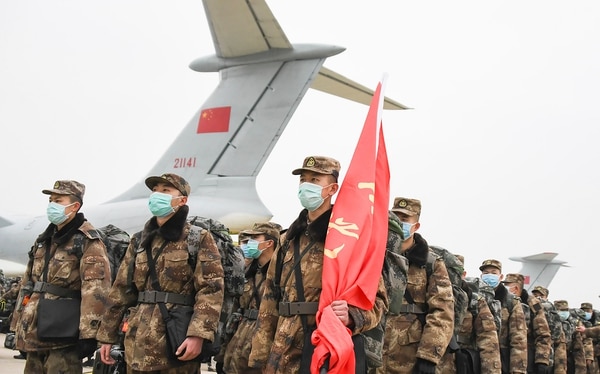 Though Defense Secretary Mark Esper has said China tops DoD’s adversaries list, the Pacific spending proposals reflect some frustration within the Armed Services Committees that the Pentagon has not prioritized the region in line with the National Defense Strategy’s emphasis on great power competition. Inhofe and Reed’s op-ed criticized the Pentagon’s emphasis on platforms when they argue it should be emphasizing missions and the force posture, capabilities and logistics that would enable those missions.

To that end, Inhofe and Reed are seeking funding in categories similar to the EDI: Military construction, fuel and munitions storage and deployable air-base kits. That is to say, runways and fuel depots a war plane might need, but not extra planes.

“It doesn’t matter how many F-35s the military buys if very few are stationed in the region, their primary bases have little defense against Chinese missiles, they don’t have secondary airfields to operate from, they can’t access prepositioned stocks of fuel and munitions, or they can’t be repaired in theater and get back in the fight when it counts,” Reed and Inhofe wrote.

Whatever final shape the fund takes will likely draw from a landmark report Congress required from Indo-Pacific Command, delivered to Congress in early April. That report, penned by the command’s chief, Adm. Phil Davidson, called for $1.6 billion in funding in FY21 and an additional $18.46 billion over FY22-FY26.

That funding was broken into five categories: Joint force lethality, force design and posture, strengthen allies and partners, exercises, experimentation and innovation, and logistics and security enablers. It included a 360-degree persistent and integrated air defense capability in Guam, for $1.67 billion cost over six years, new radars and the development of small bases around the Pacific to break up large targets for Chinese weapons.

Thornberry’s plan featured similar categories, but increased the near-term funding request dramatically. One congressional staffer said that Thornberry, who is retiring come January, has been realistic that the whole $6 billion request is unlikely to survive the coming budget fights. The goal, the staffer said, is to get something through that creates the account, in hopes it can grow moving forward.

Smith hasn’t made his own proposal, but his spokesperson said last month that he favors an account to “responsibly fund activities that are fully supported by DoD, avoid budgetary gimmicks, and require DoD to provide additional information to ensure DoD is strategically aligning resources toward the challenges and objectives in the Indo-Pacific.”

← Back To The Shadows: The Future Role Of Special Ops
America Rethinks Its Strategy In The Wild West Of Cyberspace →