Are We Ready For The ‘Burn-In’ And The Real Robotic Revolution?

Are We Ready for the ‘Burn-In’ and the Real Robotic Revolution? | RealClearDefense 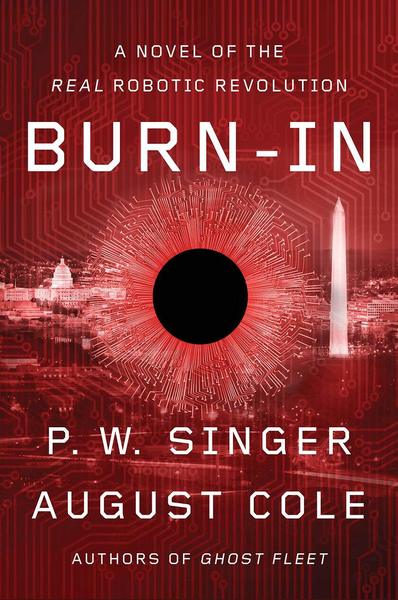 Peter W. Singer and August Cole have just released their latest book, “Burn-in: A Novel of the Real Robotic Revolution.” Singer and Cole describe their work as “useful fiction” as they, through a thrilling, yet plausible story in the ‘not so distant’ future explore the moral, ethical, political, economic and social consequences associated with the rapid integration of automation, robotics and artificial intelligence into our everyday lives.

In “Burn-In,” we follow the exhilarating adventure of a Marine, turned FBI Special Agent, Lara Keegan partnered with an AI enhanced humanoid robot named Tactical Autonomous Mobility System or TAMS. Initially, Special Agent Keegan was vehemently opposed to the idea of teaming with a robot; yet despite her reticence, she accepts the assignment, and ultimately, through several sensational missions, the robot earns Special Agent Keegan’s trust. Trust, which ultimately proves to be decisive in disrupting a terrorist’s goal of unifying society against a real robotic revolution. An absolutely gripping, adrenaline-charged read that we could not put down.

But we found that the book’s greatest impact is after you do indeed put it down and reflect on what you have just read. You simply can’t stop thinking about this novel and how the real robotic revolution will play out in the coming decade. Along with the benefits of robotics, AI and automation, the darker elements of our ‘would-be’ future are explored, taking an insightful punt on those 2nd and 3rd order consequences that could adversely affect society as we race to adopt these new technologies. It forces you to contemplate whether the juice is indeed worth the squeeze when it comes to new tech – given what we sacrifice as a result. The tablet generation, augmented reality, and unemotional machine decision making already tickle our consciousness as a society and the potential consequences of which are depicted throughout this novel.

As we look towards the future, beyond what we know, and to the science fiction imagined as science fact, a common theme emerges – TRUST. Godfathers of science fiction founded on science facts such as Arthur C. Clarke and Isaac Asimov have explored this at range, but “Burn-In” brings it home in a way you feel it is incumbent on you, the reader, to decide – how much trust do you place in the machine? What is my unconscious bias, would I, could I put my life in the hands of a machine?

The theme of trust in “Burn-In” is intricately portrayed by the remarkably human relationship that develops between Special Agent Keegan and her “partner” TAMS. The trust is built through a “Burn-In,” the continuous use of the machine, designed to bring it to the point of failure, before ultimately putting it into use. TAMS not only passes these “tests”, but outperforms typical human agents on each task and even provides Special Agent Keegan with key insights, which ultimately prove to be critical in thwarting terrorist’s ambitions. In essence – TAMS becomes mission essential to Special Agent Keegan.

Just as Singer and Cole did in their previous collaboration, “Ghost Fleet, A Novel of the Next World War,” they created a “useful fiction” for the future of Maritime Warfare. While at first glimpse, one might consider “Burn-In” a law-enforcement thriller with themes that don’t “float” in the maritime. The relationship between Special Agent Keegan and TAMS, building trust in a machine, is exactly the same issue facing the NATO Maritime Unmanned Systems Initiative as it attempts to integrate and exploit robotics and AI across Allied navies.

As you would expect, when life is on the line, every measure to reasonably mitigate risk must be taken. This traditionally could be documented and measured, but the threat is evolving too fast, wielding too much information. Hypersonic missiles, Big Data exploitation, quantum computing, and Cyber Warfare do not lend themselves to your standard Human cognition. Thus militaries around the world are faced with a conundrum:

Test, develop and assure military capability the old-fashioned way and risk irrelevance upon delivery OR trust in your machine, its ability to learn and the validity of its recommendations in the heat of battle.

In short, it is realized that the risk of not adopting the technology (and losing) outweighs the risk of adoption (and winning). It is a leap of faith, a gritty, long winded leap of faith explored in a fascinating and fast paced way in “Burn-In” where it shows – there will be errors, mistakes, downsides – however, the general direction of travel is UP. Getting this message across to senior political and military leaders around the world is not always easy – thanks in some part to Hollywood and its influence on the public perception of intelligent machines.

Hollywood has, to a greater or lesser extent, scared the horses in terms of trust. Even the most rational military leaders are mindful of the ‘Terminator’ paradigm. The situation where we will create something sentient that realizes the Human race is flawed (who knew) and does something devastating about it. Philosophical discussions around sentient beings can be argued all day – the fact remains the human brain has over 80 million parallel connections, so we are three decades off a computer replicating that, without even factoring in the chemical reactions spawned by emotions – and what they do. What “Burn-In” does extrapolate very well is the machine learning which is possible, and articulates its utility in life or death scenarios. If mankind does not trust something manmade, then what does that say?

There are no easy answers, no right answers, “Burn-In” plays out the realism that whatever evolves will take time to trust – but ultimately that leap is worth taking, the juice is worth the squeeze accepting it will not all be ‘cupcakes and rainbows’ along the way – but consider the alternative. These are real decisions, facing leaders in NATO today, risk a slow but steady decline into obsolescence or trust in something new, imperfect but game changing. The robotic revolution is already here, “Burn-In” is the perfect marriage between science fact, political potential, and technological development. It serves as a thrilling eyeopener to the challenges we face now, and for generations to come.

Michael D. Brasseur is the Director, Naval Armaments Cooperation for the US Mission to the North Atlantic Treaty Organization (NATO), and the first Director of NATO’s Maritime Unmanned Systems Innovation & Coordination Cell (MUSIC2). MUSIC2 is the key integrator and accelerator for the NATO MUS Initiative, which aims to combine the synergistic network effects offered by the most powerful global military alliance with the agility, ingenuity, and mindset of a start-up company to ultimately enhance the Alliance’s capabilities through manned/unmanned teaming. The views presented here are his own and not that of NATO or the US Mission to NATO.

Sean Trevethan is the British Royal Navy’s Fleet Robotics Officer and Vice Chairman of the NATO Maritime Unmanned Systems Initiative. He is responsible for cohering development efforts in unmanned systems, autonomy, and machine learning within his own Navy and more broadly across the NATO Alliance. The views presented here are his own and not that of the Royal Navy or NATO.

← How John Brennan And Mike Pompeo Left The U.S. Blind To Saudi Problems
Special Operations Command Wants To Put All Mission Data In A Single Pane Of Glass →